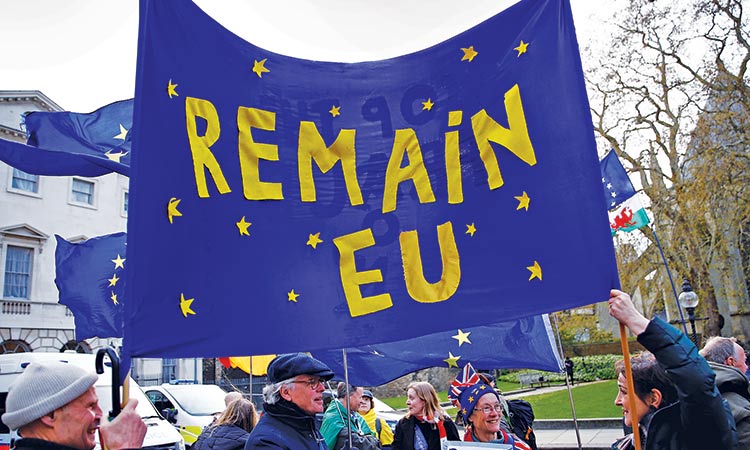 Anti-Brexit demonstrators protest outside the Houses of Parliament in London on Tuesday. Reuters

LONDON: British lawmakers endorsed Prime Minister Theresa May’s request to the European Union (EU) to delay Brexit until June 30 at a vote in parliament on Tuesday, adding weight to the pitch she will make to EU leaders in Brussels.

The majority of May’s Conservative Party voted alongside the opposition Labour Party to back the prime minister’s approach by 420 votes to 110. The main rebellion came from pro-Brexit Conservatives who want Brexit to happen sooner.

“We should all be very clear what this extension would be for - it is all about making sure we leave the EU in a timely and orderly way and that means leaving with a deal,” government Solicitor-General Robert Buckland said ahead of the vote.

Labour Party junior Brexit spokesman Matthew Pennycook said his party supported May’s extension plan, but warned the extra time must be used to try and find a compromise with Labour and not to pass her own thrice-rejected deal at a fourth attempt.

“The public will not forgive the government if an extension is sought and agreed under the pretence of efforts to secure cross-party compromise,” he said. Germany and other EU powers will accept May’s request for another delay to Brexit but French President Emmanuel Macron will seek to limit Britain’s influence as it grapples with its departure.

In a sign of just how far the three-year Brexit crisis has sapped British power, May dashed to Berlin and Paris on Tuesday to ask German Chancellor Angela Merkel and Macron to allow the world’s fifth largest economy to delay for a second time.

As May arrived at the Elysee Palace in Paris to a guard of honour, she was unable to trumpet any breakthrough with Labour. So May was asking for a delay until June 30.

“People are tired and fed up - but what to do?” one EU diplomat said. “We won’t be the ones pushing the UK off the cliff edge.”

Another EU official involved with Brexit said an extension was very probable as no European power wanted the chaos that they fear a no-deal exit would sow through financial markets and the EU 27’s $16 trillion economy.

“Nobody wants to pull the plug by 13th April,” said the official. “But for how long - I don’t know. And France will ask a lot of questions in Brussels.”

Shortly before May landed in Paris, an official in Macron’s office said that “in the scenario of an extended delay, one year would seem too long for us.”

He added that if Britain did delay its exit, it should not take part in EU budget talks or in choosing the next president of the EU’s executive commission - and that the other 27 member states should be able to review its “sincere cooperation.”

“He (Macron) certainly wants to know about conditionality, particularly the issue of the United Kingdom being involved in future (EU) decision-making,” Varadkar said.

Earlier in the day, May met Merkel at her riverside Chancellery, a short walk from Berlin’s Brandenburg Gate, and departed with a warm exchange of kisses.

“The leaders agreed on the importance of ensuring Britain’s orderly withdrawal from the European Union,” May’s office said in a statement.

While they discussed Brexit, Germany’s opposition liberal FDP party drove an advertising van past the Chancellery with a slogan reading: “Dear Theresa May. Just do it. Stop Brexit. Make the most of Europe’s opportunities.”

In preparation for the emergency summit, the EU’s second in two weeks, foreign and Europe ministers met in Strasbourg.

Chief EU Brexit negotiator Michel Barnier said the bloc was ready to grant a delay, but added: “Any extension should serve a purpose. The length should be proportional to the objective. Our objective is an orderly withdrawal.”

“’No-deal’ will never be the EU’s decision. In order to avoid ‘no-deal,’ the UK needs to agree to a deal,” he told a news conference in Luxembourg.

A nine-month extension to Dec. 31 was gaining favour in Brussels, diplomats said.

The pound, which has seesawed so much on Brexit news that some investors have stepped away from the sterling market, rose and then dipped on speculation Merkel could offer May a better deal. Germany denied that. 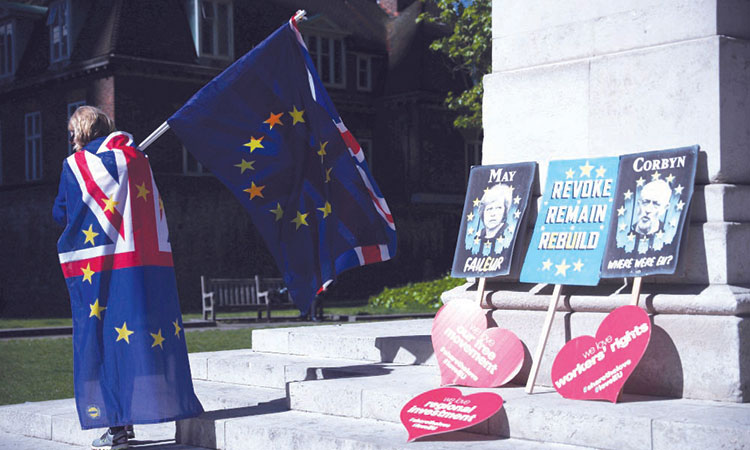