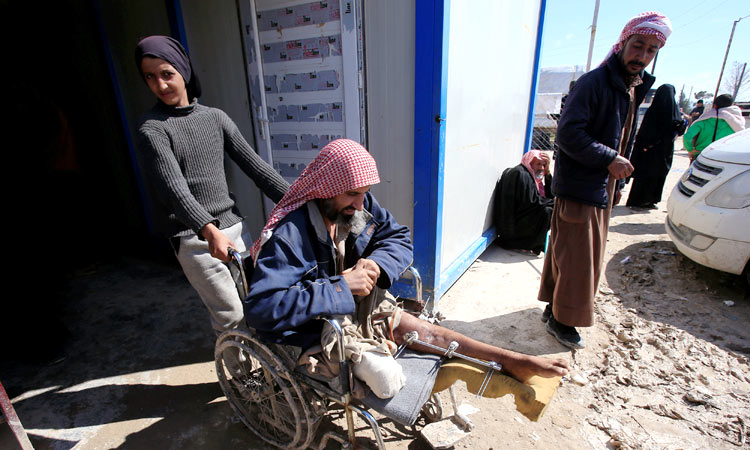 Suicide bombers disguised as farmers struck an army position in western Syria on Tuesday in an attack that killed three people and all the militants, state-run media said.

The Syrian Observatory for Human Rights, which monitors the eight-year-long war, said 10 people were killed and the attack was carried out by a militant group in a "demilitarised" zone set up under the Turkish-Russian agreement.

State media said the militants were dressed as local farmers when they hit the position near Taybat Al Imam around 3am (midnight GMT). A tank supporting them was destroyed.

"The clash between the guards at the position and the terrorists resulted in three martyrs and the killing of all members of the terrorist group," state media cited a military source as saying.

Russia and Turkey struck an agreement last September that staved off a major government offensive into Idlib and adjacent areas of Hama and Aleppo provinces through the creation of the demilitarised zone.

But militant groups that hold sway in the Idlib region have further tightened their grip in recent months, and Russia remains keen to help Assad take back the territory.

President Vladimir Putin, Assad's most powerful ally, discussed Syria with Turkish President Tayyip Erdogan in Moscow on Monday and they agreed to conduct joint patrols in the area, where Turkey has also deployed forces in rebel-held areas.

Last week, Damascus said its ally Russia had started to feel that its patience was running out over the northwest. However, Moscow had told Damascus that Turkey was still determined to implement the agreement reached in September.

Idlib and adjoining areas of Hama and Aleppo provinces are largely under the control of militant groups including Tahrir al-Sham, formerly known as the Nusra Front.

The United Nations says Idlib and the adjacent areas are sheltering some 3 million people, half of whom have been uprooted from other parts of Syria by the war.

Turkish forces control a separate chunk of territory north of Aleppo where Turkey-backed Free Syrian Army rebels are based.