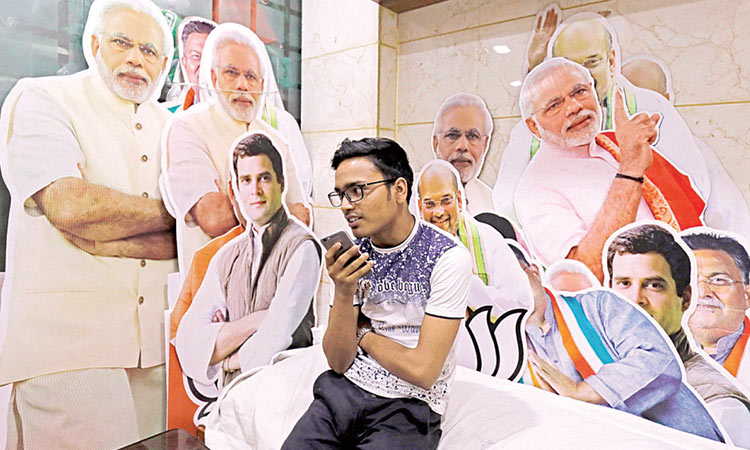 A worker sits next to the cutouts of politicians selling election campaign materials in Delhi on Monday. Reuters

Prime Minister Narendra Modi on Tuesday made a passionate appeal to the millennial generation exhorting them to select the nation above everything else while exercising their first-ever vote in the 2019 elections.

Addressing a rally at Ausa in this Marathwada district, Modi said that this generation, born in the 21st century, has got a lot from their families, people and the country as they stepped into adulthood.

“This is the opportunity to repay it... I ask you, will you ensure that your first vote will be for the Pulwama martyrs, for the poor to get homes, water or the farmers and health for all countrymen? “You must only vote for the country and for a strong government,” Modi urged.

He said that every vote that is cast for the Bharatiya Janata Party would “come directly to me...” and asked the Millenials to now vote only in favour of national interest.

Sharing the dais for the first time in 28 months with ally Shiv Sena President Uddhav Thackeray, Modi assured that he would not let the aspirations of the people in backward Marathwada region go in vain and would take up developmental activities and ensure their faith is not belied.

After harsh criticism of the Nationalist Congress Party (NCP) and its President Sharad Pawar in the past few rallies here, Modi on Tuesday warned the Maratha supremo of consequences of allying with the Congress.

“The manifesto of the Congress and its allies are anti-national... For decades, they have pushed the nation into insecurity and nobody has any expectation from the Congress... But you, Sharadrao, you? Does it suit a person of your stature to ally with such people,” Modi thundered.

Accusing both the Congress and the NCP of pursuing ‘dynastic’ politics and promoting their families, he said they should learn from the late Shiv Sena founder-patriarch, Bal Thackeray.

“If he wanted, he could have become the Chief Minister or nominated his son Uddhav for the post... But he never did that and allowed other people in the party to come up.” Modi also attacked the Congress for promising to speak with separatists and not remove Article 370 in Jammu and Kashmir in its Lok Sabha elections manifesto.

He said: “This is exactly what Pakistan wants... This will help Pakistan and the separatist forces. The Congress manifesto will break the country.”

He blamed the Congress leadership for not standing up courageously to prevent the Partition in 1947 and said “Pakistan would never have existed in the first place.”

Reiterating that the Congress and its allies were working against the country, he said: “They are after me... They are abusing me. They allege that we did not shoot down any Pakistan fighter plane, believing some report from somewhere and exploiting it to spread canards. How many proofs will you demand from the Indian Army and Indian Air Force?” “This is the time to punish these people who have compromised on national security for electoral politics... They should be made to lose their (election) deposits... I have stopped all their dirty games and now all our decisions are only in the national interest,” Modi told the gathering.

In his address, Thackeray termed the Congress manifesto as ‘fibbing’ and lauded Modi for the BJP manifesto’s promise to make farmers the ‘centre’ of development.

He also urged Chief Minister Devendra Fadnavis, who was also present on the dais, to iron out the creases in the farmers loan waiver and crop insurance schemes in Maharashtra.

Taunting Congress President Rahul Gandhi for the party manifesto, Fadnavis said that “when your great grandfather and grandmother could not eliminate poverty, how will you do it.”

Tuesday’s Ausa rally marked the first time that Modi and Thackeray shared the stage after 28 months.

Earlier, they had joined hands on Dec.24, 2016 for performing the ‘jal pooja’ for the proposed grand memorial of Chhatrapati Shivaji Maharaj in the Arabian Sea, off Chowpatty in Mumbai, and later addressed a public meeting in the Bandra Kurla Complex.

Modi said, “It has not been six months since the government was formed in Madhya Pradesh but millions and billions are being recovered from their places.”