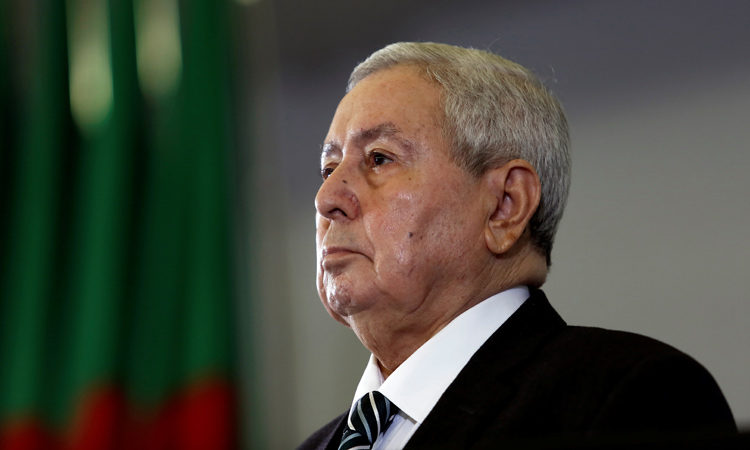 Abdelkader Bensalah is pictured after being appointed as interim president by Algeria's parliament in Algiers on Tuesday. Ramzi Boudina/Reuters

Algeria's interim president, in a televised speech, promised on Tuesday to organise free elections within 90 days following weeks of protests that led to the resignation of leader Abdelaziz Bouteflika after 20 years in power.

Abdelkader Bensalah, the interim president, was rejected by demonstrators right after he was named by Parliament to take charge during a volatile transition period after decades of autocratic rule.

"I am committed to organising elections," said Bensalah, who has been re-elected as leader of the upper house since the early 2000s. The army was aligned with the constitution as a pathway out of the crisis," he added in his 16-minute speech.

The critical question is how Algeria's military, which has swayed Algerian politics from behind the scenes for decades, will react to Bensalah's appointment and any opposition that arises. 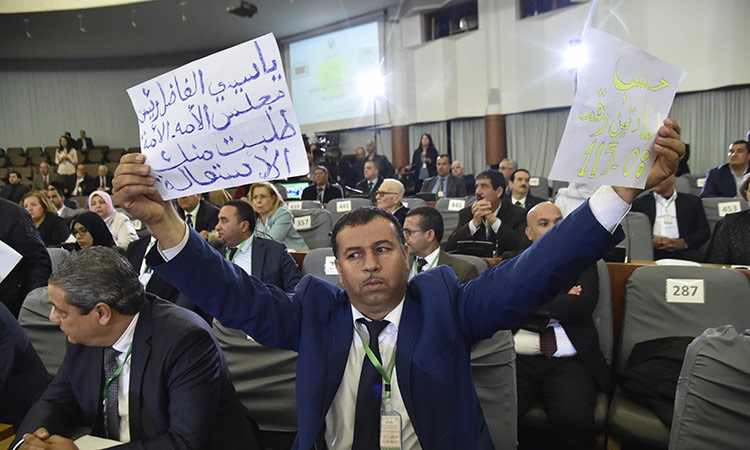 An Algerian member of parliament holds up a sign which calls on Abdelkader Bensalah (unseen), to resign at the Palais des Nations in Algiers on Tuesday. Ryad Kramdi /AFP

"I want to work towards fulfilling the interests of the people," Bensalah, a trusted ally of Bouteflika, told parliament on taking up the 90-day interim presidency.

"It's a great responsibility that the constitution demands of me," the 77-year-old added.

Opposition parties refused to back the appointment of the seasoned establishment insider and boycotted the session, as thousands of students protested against him in Algiers.

"I want to work towards fulfilling the interests of the people.

For the first time in seven weeks police in the capital fired tear gas to try to disperse the protest by students, who were also hit with water cannon.

On Friday − in the first weekly mass protest since Bouteflika announced his departure after losing the military's support − Algerians demanded regime insiders be excluded from the political transition.

Ahead of the parliamentary session, an editorial in pro-government daily El Moudjahid on Tuesday suggested Bensalah should step aside from the presidential post.

He is "not tolerated by the citizen movement, which demands his immediate departure," or by the opposition and various political groups in both houses of parliament, the newspaper said.

Forces use water cannon to disperse students taking part in an anti-government demonstration in Algiers on Tuesday. AFP

Students protest against the government in Algiers on Tuesday. AFP

The protest movement is calling for a new transitional framework that is committed to deep reforms and organising free elections.

Ahead of Bensalah's appointment, calls continued for the speaker to step down.

"He has to resign, it's the voice of the people and the people must be right," said 50-year-old Mourad, an entrepreneur who will protest Friday with his two young daughters.

"They don't know that there's democracy... I want to teach them what freedom is," he added.

Bensalah has to resign, it's the voice of the people and the people must be right.

Algerians of all ages have rallied since late February against Bouteflika, who resigned a week ago after efforts to appease demonstrators proved fruitless.

Although the 82-year-old's resignation was celebrated by protesters, they have remained firm in pushing for a wider overhaul of the political system.

Human Rights Watch said Bouteflika's departure is "at most a first step in ending autocratic rule."

"During any transitional phase, authorities should fully respect the rights of Algerians to speak, assemble and associate with one another," the watchdog said in a statement.

Demonstrators in huge numbers have defied a protest ban in Algiers, and HRW on Tuesday called on authorities to overhaul laws "on association and assembly that stifle rights." 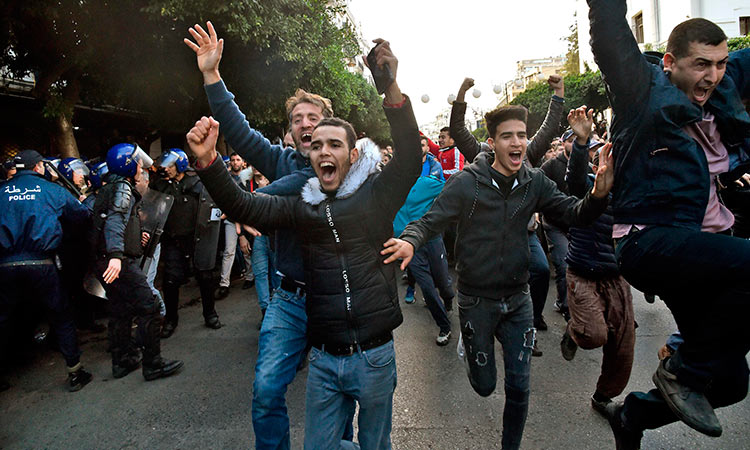 Mass protest movement views election as a charade intended to keep the ruling elite in power. Police disperse crowd on streets in central Algiers with sticks in but then fell back as more protesters arrive.