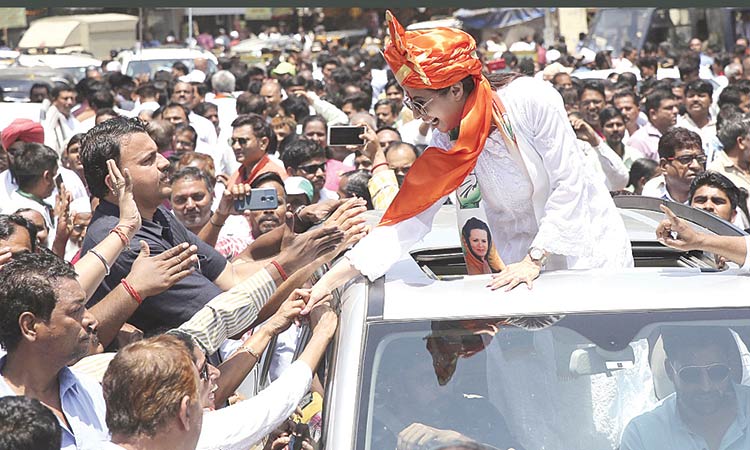 Gandhi shared on Twitter a 25-second video clip of a recent interview of Modi given to a Hindi news channel. In the clip, Modi is seen asking the interviewer if she believed the verdict on Rafale deal given by the Supreme Court, the Comptroller and Auditor General, the French President and the French government.

Gandhi said in the tweet: “You can run Mr Modi, but you can’t hide. Your karma is about to catch up with you. The country can hear it in your voice. Truth is a powerful thing. I challenge you to a debate on corruption.”

On March 1, Gandhi had challenged Modi to a one-on-one debate on corruption. He had also dared the Prime Minister to hold a press conference and answer questions of the public.

Rahul announced that his party will waive off interest on education loans issued before March 31, 2019 if it comes to power after the coming Lok Sabha elections.

He also promised to introduce the single-window system for education loans.

“Till the time the student has not landed a job, the banks will not charge any interest,” Gandhi said in a Facebook post in Hindi.

The Congress, in its recently-released manifesto for the 2019 polls, promised autonomy to universities, adequate funds, reservations and student rights to gain popularity among the young voters. But, it did not mention anything regarding student loans.

The latest announcement is indicatively targeted at the middle class, which has the highest volume of student loans. It is also in sync with the claims of the manifesto that India needs more universities.

“Congress promises to establish more public universities in the country, especially in under-served areas. We promise to restore the autonomy of colleges and universities,” said the manifesto.

The Congress on Sunday unveiled its campaign slogan for the Lok Sabha elections − “Ab Hoga Nyay” (Now, there will be justice). The slogan will feature in all its advertisements, posters, radio jingles, billboards and songs.

Nyay is the acronym for the Congress’ minimum income guarantee scheme − Nyuntam Aay Yojana − under which the party has promised to give Rs 72,000 per year to 20 per cent of the poorest families in the country if the party is voted to power.

The slogan is based on the positive feedback the party received around the concept of ‘Nyay’, sources said.

“We are seeking justice or ‘Nyay’ against the injustices committed in the past four years. Those who promised ‘Acche Din’ only delivered ‘Anyay’ (injustice),” said Anand Sharma, Chairman of the Congress Publicity Committee.

Keeping Rahul Gandhi at the heart of its campaign, the visual elements include his interactions with people from all walks of life over the past few years.

The party also credited Priyanka Gandhi Vadra’s contributions in developing the campaign. Sharma said Priyanka took an active part in the deliberations and the party appreciated her inputs.

“Simplicity, genuineness and honesty as opposed to hollow, empty slogans and fake promises is the approach the Congress publicity campaign takes,” Sharma said.

Advertising agency Percept will work on the creative aspects of the Congress campaign, including a video jingle penned by Javed Akhtar and directed by filmmaker Nikhil Advani.

The campaign will focus on justice for the poor, unemployed youth, farmers, women, dalits, tribals and businessmen hit by the Goods and Services Tax (GST), the party said.

The party will also deploy large container trucks painted with the slogan “Ab Hoga Nyay” which will travel across the country. The trucks will carry panels on both sides, which will be 40 feet in length and 8 feet in height.

Besides in Hindi, the Congress’ campaign will also have regional adaptations. The Congress is aiming to cover all the vernacular languages.