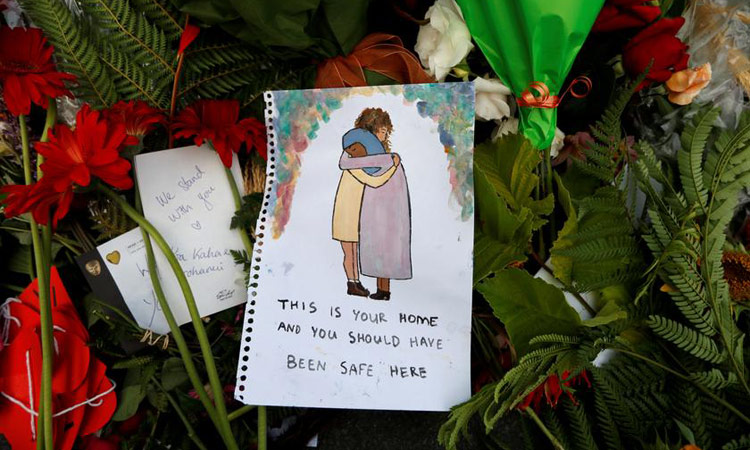 Flowers and signs are pictured at a memorial as a tribute to victims of the mosque attacks, near a police line outside Masjid Al Noor in Christchurch. File photo/ Reuters

The inquiry would look into the suspected gunman’s activities, use of social media and international connections, as well as whether there was “inappropriate” priority setting in state counter terrorism resources.

“The Royal Commission plays a critical role in our ongoing response to fully understand what happened in the lead up to the attack and to ensure such an attack never happens again,” Ardern told reporters at Parliament.

A suspected white supremacist has been charged with 50 counts of murder over the Christchurch shootings on March 15 and will next appear in court in June.

Ardern has said the man had not been on any watch lists in New Zealand or Australia.

New Zealand’s worst peacetime mass shooting has shaken the country to its core and prompted the government to quickly tighten gun laws.

Ardern said the inquiry would look into whether security agencies had applied scrutiny to Muslim communities at the expense of far right groups.

“It is aimed directly at trying to pick up what has been a question raised in the aftermath of the terror attacks into whether or not resourcing was only focused on particular areas and whether or not that came at the cost of other areas, so yes we are directly trying to address that issue,” she said.

The commission would be led by William Young, a judge on New Zealand’s highest court, who would be given security clearances to look at information held by New Zealand’s intelligence agencies.

The inquiry would start considering evidence from May 13 and another inquirer would be appointed in April, Ardern said.

Speeding Mercedes kills 1, wrecks havoc in Bengaluru in a bid to flee scene