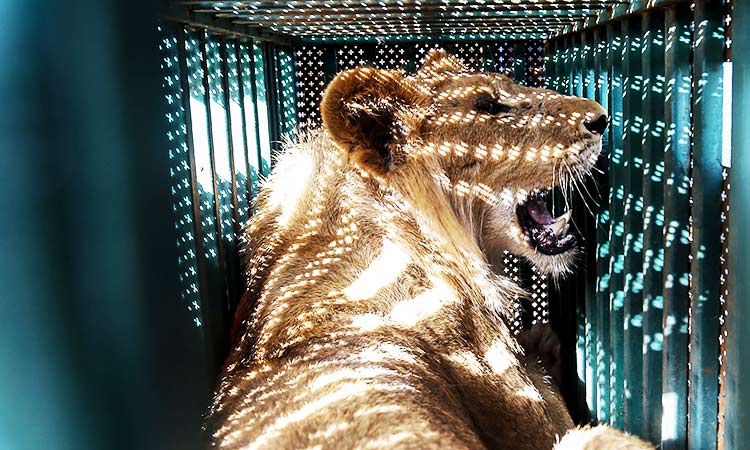 A sedated lioness is pictured in a cage at a zoo in Rafah.

More than 40 animals, including five lions, were evacuated from squalid conditions in a Gaza Strip zoo on Sunday to be taken to Jordan, an animal welfare group said.

Thin and weakened, the 43 animals, including a wolf and monkeys, had been living in "terrible conditions," said the Four Paws association, which organised the transfer.

The Rafah zoo in the southern Gaza Strip is the oldest in the enclave, which has been under an Israeli blockade for more than 10 years.

The animals were not in great shape, but were stable enough to be transported to a reserve in Jordan, some 300 kilometres (190 miles) from the Palestinian enclave, said Martin Bauer, spokesman for the Vienna-based welfare group.

The animals were sedated to be put in cages for the transfer through Israel. Two of the lions would eventually be sent to South Africa.

The animals were taken out of a Gaza zoo by FOUR PAWS organization.

Four Paws was supposed to move ahead with the transfer in late March, but the organisation could not enter the enclave since the crossing was closed that week due to a flare-up of violence between Gaza militants and Israel.

Bauer said the mission had the support of the authorities in Gaza, run by Hamas, and of the zoo's owner, who has said he could no longer afford the upkeep for the animals.

Israel's permission was also received for the mission.

He said it was the biggest such mission carried out by Four Paws and intensive negotiations were required.

The zoo received attention recently when the owner revealed he had declawed one of its lions so customers could pay to play with her.

In January, four lion cubs died of cold in the zoo.

The Gaza Strip suffers from poverty and a lack of infrastructure, including a severe electricity shortage.

Israel and Palestinian militants in the strip have fought three wars since 2008.

Four Paws says a number of animals at the zoo have died in bombings since its 1999 opening.