May woos opponents and EU leaders over Brexit - GulfToday

May woos opponents and EU leaders over Brexit 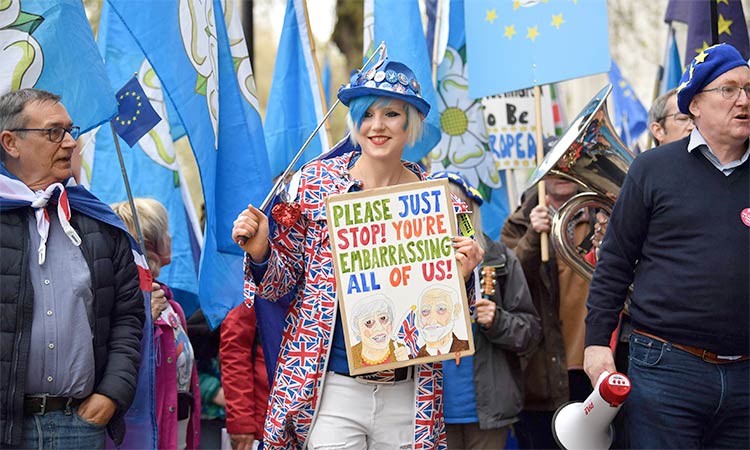 Anti-Brexit demonstrators from Yorkshire demonstrate outside the Houses of Parliament in London on Monday. Agence France-Presse

LONDON: Prime Minister Theresa May wooed domestic political opponents and European leaders on Monday as she sought to break Britain’s Brexit impasse and secure a delay to the country’s departure from the European Union (EU).

May’s Conservative government and the main opposition Labour Party were clinging to hope of finding a compromise Brexit deal, two days before EU leaders decide whether to grant an extension to the UK’s departure from the bloc. If they refuse, Britain faces a sudden and chaotic departure on Friday, the Brexit deadline previously set by the EU.

May has asked for a new delay until June 30, to give Britain’s divided politicians time to agree, approve and implement a withdrawal agreement. The bloc’s leaders are due to meet on Wednesday in Brussels to consider the request.

An extension requires unanimous approval from all 27 EU national leaders, some of whom are fed up with Brexit uncertainty and reluctant to prolong it further. French President Emmanuel Macron has been particularly resistant to the idea of further delaying Brexit, saying the EU can’t be held “hostage” to Britain’s political crisis.

May’s office said the prime minister spoke to multiple European leaders by phone on Monday and will dash on Tuesday to Berlin and Paris for face-to-face talks with German Chancellor Angela Merkel and Macron.

“They want Brexit to be resolved as quickly as possible,” Hunt said of the other 27 EU leaders. “So do we.”

Irish Prime Minister Leo Varadkar said he was “open to extending the deadline.”

“There will be different views, but I am confident that we will reach agreement,” he said after meeting chief EU Brexit negotiator Michel Barnier in Dublin.

Dutch Prime Minister Mark Rutte, however, said May would have to convince EU leaders that Britain would continue “sincere cooperation” with the bloc if granted a delay. Some pro-Brexit British politicians have suggested the UK could try to disrupt EU policymaking if it remains a member much longer.

Almost three years after Britons voted by 52% to 48% to leave the EU, the country remains divided and the political process deadlocked.

Research by the Hansard Society found that 54 per cent of voters wanted a strong leader willing to break the rules, while 72 per cent said the political system needed “quite a lot” or “a great deal” of improvement.

May and the EU agreed late last year on divorce terms, but the agreement has been rejected by Parliament three times. In desperation, May last week sought talks with the left-of-center Labour Party.

Labour favours a softer Brexit than the government has proposed and seeks a close economic relationship with the bloc through a customs union — a trading area that sets common tariffs on imports while allowing free trade in goods moving between member states.

So far, the cross-party talks have failed to yield a breakthrough, with Labour saying the Conservative government had not offered concrete changes to its Brexit plan.

Labour Brexit spokesman Keir Starmer said, “The ball is in the government’s court.”

Both sides said there would be further talks between Labour and government officials on Monday evening.

The EU would welcome a move by Britain to keep close post-Brexit economic ties. Barnier said that the bloc was willing to be “much more ambitious in our future relationship” and would agree to a customs union arrangement.

The alternative of a no-deal Brexit threatens huge disruptions to trade and travel, with tariffs and customs checks causing gridlock at British ports and possible shortages of goods in the UK.

It would also be tough for Ireland, the only EU member state to share a land border with the UK. Any customs checks or other obstacles along the currently invisible frontier would hammer the Irish economy, and could undermine Northern reland’s peace process. Barnier said the EU would remain “fully behind Ireland.”

“If the UK were to leave the EU without a deal, we would not discuss anything with the UK until there is an agreement for Ireland and Northern Ireland,” he said.