Libya in chaos since 2011 overthrow of Qadhafi - GulfToday

Libya in chaos since 2011 overthrow of Qadhafi 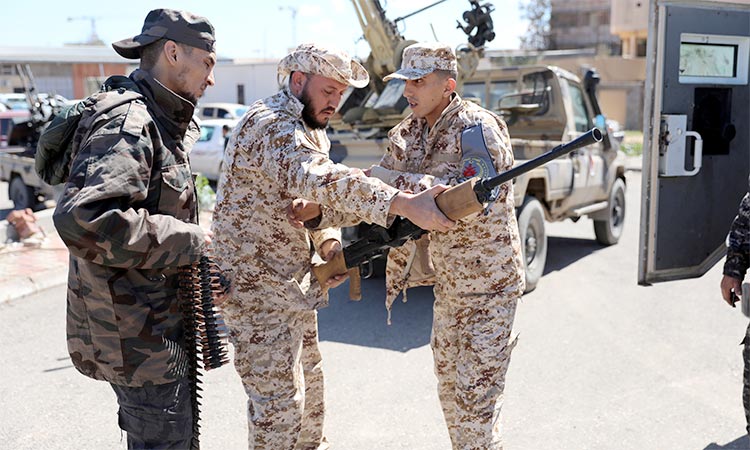 Members of Misrata forces, under the protection of Tripoli’s forces, prepare themselves to go to the front line in Tripoli. Reuters

TRIPOLI: Libya has been mired in chaos since the ouster and killing of dictator Moamer Qadhafi in 2011, with two rival authorities and a multitude of militias vying for control of the oil-rich country.

The UN on Sunday made an “urgent” appeal for a two-hour truce in the southern suburbs of the capital Tripoli to evacuate wounded and civilians as the forces of strongman Khalifa Haftar continued an offensive to take the city.

The country’s internationally recognised unity government is based in Tripoli and Haftar supports a parallel administration based in the east.

Here is a timeline of the Mediterranean country’s descent into turmoil:

Triggered by uprisings in Tunisia and Egypt, demonstrations erupt in Libya in February 2011. A coalition led by Washington, Paris and London lends its backing to an armed revolt.

Qadhafi, in power for 42 years, flees the capital. He is captured and killed on October 20, 2011 during a battle for his hometown Sirte, east of Tripoli.

In August 2012 the NTC hands power to a transitional authority elected a month earlier -- the General National Congress (GNC).

US ambassador Chris Stevens and three American staff are killed in a September 11, 2012 attack on their consulate in Libya’s second city Benghazi. An Al-Qaeda-linked extremist group is blamed.

Most foreign delegations withdraw from the country.

Dissident army general Haftar launches an offensive in May 2014 against jihadist groups in Benghazi.

As nationalists and hardliners vie for power, legislative elections are held in June and the GNC is replaced by a parliament dominated by anti-hardliners.

Hardliners-led militias contest the results and group under the banner of “Fajr Libya” (Libya Dawn). They storm Tripoli in August, installing their own “national salvation” government and restoring the GNC.

The elected house, which has international recognition, takes refuge in the eastern city of Tobruk near the border with Egypt.

Thus the country finds itself with two governments and two parliaments.

After months of negotiations and international pressure, lawmakers from the rival parliaments sign an accord in December 2015 in Morocco to set up a UN-backed Government of National Accord (GNA).

In March 2016, GNA chief Fayez al-Sarraj arrives in Tripoli to set up the new government, but Haftar’s rival administration refuses to recognise its authority.

In June 2018, a militia attacks two northeastern oil sites under Haftar’s control through which oil is exported.

After days of fighting, Haftar’s forces announce they are back in “full control” and have also seized the city of Derna from radicals.

In January 2019 Haftar launches an offensive into oil-rich southern Libya, ostensibly aimed at wiping out “terrorists” and criminal groups.

His forces seize the region’s capital Sebha and one of the country’s main oil fields without a fight.

On February 28 the UN says Libya’s rivals have met and agreed to hold polls.

In March the UN says it will organise an all-party conference the next month to draw up a “road map” for Libya, including setting dates for legislative and presidential elections.

Later in March the African Union says it will host a “reconciliation” conference in July aimed at uniting Libya’s political rivals.

On April 4 Haftar’s LNA launches an assault on Tripoli.

On April 5, Haftar’s forces are pushed back from a key checkpoint less than 30 kilometres from Tripoli.  After meeting Haftar and Sarraj, UN chief Antonio Guterres expresses concern about the situation.

On April 7 Haftar’s forces say they have carried out their first air strike on a suburb of Tripoli, where the GNA is based.