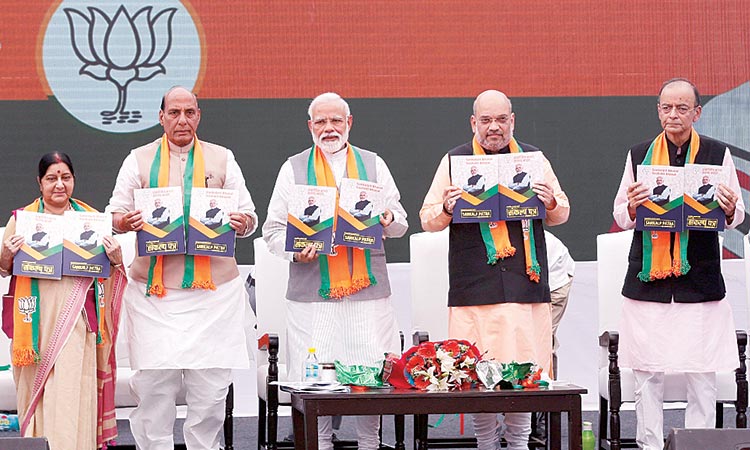 NEW DELHI: India’s ruling Bharatiya Janata Party (BJP) on Monday made a string of promises, including expeditious construction of a Ram temple, a firm hand in dealing with terrorism and doubling farmers’ income in the next three years.

The Sankalp Patra also promises to make India the third largest economy globally by 2030 and scrap Article 370 that gives special status to Jammu and Kashmir if it came back to power.

The party manifesto charted 75 milestones India @75 had to achieve, chief focus being on the farm sector, education, health and infrastructure.

Prime Minister Modi said the party’s manifesto aims at ‘One Mission, One Direction’ similar to what the party’s 2014 campaign was - Sabka Sath, Sabka Vikas. “India is a diverse country with different languages and culture, which is why we have tried to make our developmental processes multi-layered,” Modi said, adding that the party has also tried “to make the manifesto multi-dimensional.”

On the economic front, the BJP said it aspired to make India the third largest economy of the world by 2030.

The party promised that it would continue with the simplification of the GST process by engaging in dialogue with all stakeholders.

The party said purchase of defence equipment would be fast-tracked to strengthen the armed forces, adding that the BJP government would continue with its approach of zero tolerance towards terrorism if voted to power.

Security forces would continue to get a free hand to deal with terrorism, the document stated. The party said it would implement NRC (National Register of Citizens) in a phased manner in various parts of the country.

About Jammu and Kashmir, the BJP said, “We reiterate our position since the time of the Jan Sangh to the abrogation of Article 370. We are committed to annulling Article 35A of the Constitution of India as the provision is discriminatory against non-permanent residents and women of Jammu and Kashmir.”

“Let us work towards building a strong and inclusive India, whose citizens are assured of dignity, prosperity, security and opportunity,” Modi wrote in the preface of the manifesto.

In his write-up in the manifesto, Shah said, “In its tenure of five years, the government led by Prime Minister Narendra Modi has been able to take many decisions which are historic and has ushered in a comprehensive and fundamental transformation.”

In his remarks at the event, Shah said Modi had done justice to every sector of society, with cooking gas connections in rural areas, housing and affordable health care for all and welfare schemes for farmers.

The ruling party has promised to expand the coverage of the scheme to all the farmers in the country if it returns to power after the Lok Sabha election.

It said that a pension scheme will be launched for all small and marginal farmers of 60 years to ensure their social security.

Also, the BJP has promised to provide short-term loans up to Rs 1 lakh at zero per cent interest for 1-5 years on the condition of prompt repayment of the principal amount.

The BJP said it will work towards reducing all agricultural imports and institute a predictable export and import policy with a built-in mechanism for encouraging exports and discouraging imports.

Tearing into the BJP’s election manifesto, the Congress on Monday said important issues like jobs, GST, black money and demonetisation were missing from the whole announcement exercise.

Congress spokesperson Randeep Surjewala said the BJP leaders did not speak even a single word on those issues.

He said the BJP should start packing as people would reject its false promises and throw the party out of power.

Surjewala also questioned the BJP-led government on its earlier promises made in the manifesto for the 2014 elections.

“You promised two crore jobs every year, which translates to 10 crore jobs in five years. In reality, during these five years, number of jobs have actually reduced by 4.7 crore. And it’s not something that I am saying, but what has been said by the government’s own NSSO (National Sample Survey Organisation) data,” he said at a press conference here.