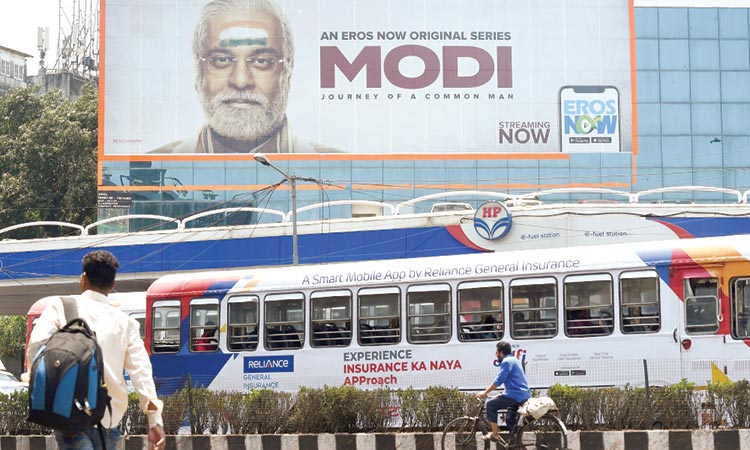 A billboard, advertising the TV series on Prime Minister’s life, is seen at a junction in Mumbai on Friday. Agence France-Presse

BHUBANESWAR: Prime Minister Narendra Modi on Saturday slammed the Congress and Biju Janata Dal (BJD) for keeping people poor in the country for their personal gain and vote bank politics.

“In fact, the Congress and BJD see their political crop in poverty. This is the reason a large part of India including Odisha has remained impoverished for so many decades,” said Modi at an election rally in Sonepur.

He said generation after generation the Congress was able to give only raised slogans for the eradication of poverty. While people got poorer, their leaders got richer. Poverty will automatically vanish if Congress disappears, he added.

Modi said Congress has planned to implement a policy that will lead to inflation with the increase of the price of essential commodities.

“This election will decide whether our India’s heroes will emerge strong or those who take Pakistan’s side,” said the Prime Minister.

“Do you want a majboor sarkar (dependent government) or a majboot sarkar (strong government),” Modi asked the gathering at Sonepur.

Attacking the Naveen Patnaik led BJD government in the state, he said farmers have been selling their produces in distress even though the Centre has hiked the minimum support price to 1.5 times of the production cost.

Besides, people are migrating to other states in search of jobs.

“Odisha is rich with abundant natural resources. Then, what is the reason for the state to lag behind in terms of development,” asked Modi.

“Once our government is formed in the state and the Centre, Odisha will be recognised for tourism instead of migration of masses,” he added.

He also raised the water scarcity issue in the region in spite of the presence of the Mahanadi and Tel rivers in the region.

Lok Sabha and Assembly elections will be held simultaneously in Odisha in four phases beginning on April 11 for 21 Lok Sabha and 147 Assembly seats.

Modi launched a scathing attack on Congress and the Gandhi family claiming they were involved in all the corruption scandals rocking between “the earth and the sky” and called for “punishing” the main opposition in the election.

“Be it Bofors or helicopters, you will not find any arms deal, where there is no news about the commission being taken by Congress,” he said at an election rally here.

Referring to new “evidence” and chargesheet in the scrapped AgustaWestland helicopter deal, he said the names of Ahmed Patel and the Gandhi family have now surfaced.

“There is one ‘AP’ (Ahmed Patel) and there is other ‘Fam’ (family). You have all heard the name of Ahmed Patel. You tell me with which family Ahmed Patel is closely associated. Who got the commission in helicopters?” he asked.

The Prime Minister said Congress leaders have not left any place where they have not indulged in corruption. They even did not spare the armed forces, he said. “From earth to sky and from Bofors to helicopters, they are involved in all corruption scandals,” he said.

He said the Congress leaders were “exposed” after the government succeeded in bringing back British national Christian Michel, the alleged middleman in the helicopter deal, from Dubai for interrogation by the Enforcement Directorate (ED).

Modi said all these people are now trying to evade jail terms through bails. “There was a time no one could dare to touch them (the helicopter deal accused) at airports. Even vehicles will take them right up to the aircraft. Everybody will salute them. But now they are out on bail. They want to escape from jail through various maneuvering,” Modi said.

Besides corruption, Modi said Congress is also trying to appease Pakistan and anti-nationals. He referred to the Congress manifesto, saying the party was trying to protect anti-nationals by promising to scrap the Armed Forces (Special Powers) Act (AFSPA).

“if we don’t protect our forces, then no mother will send her son for the highest sacrifice of his life for the country,” Modi said, charging the Congress with siding with separatists and terrorists.

The armed forces are in Kashmir because they are being protected, he said. “We are bound to give protection to our armed forces,” he said. “Politics is being played for getting votes. This is a sin. To hell with such politics,” he said.