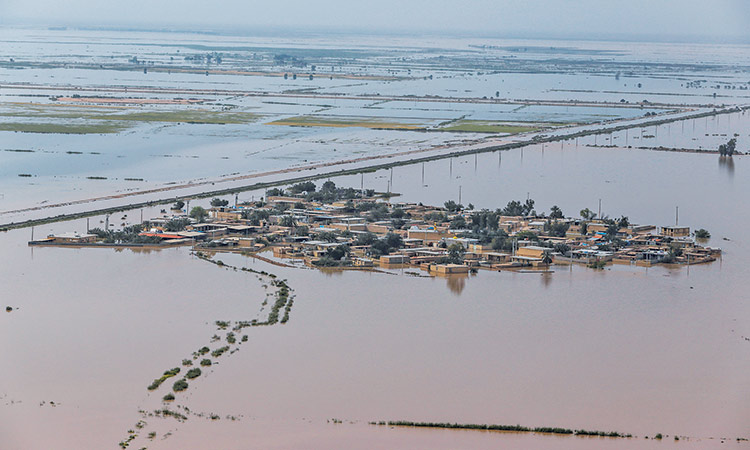 An aerial view of flooding in Khuzestan on Saturday. Reuters

TEHRAN: Iran moved on Saturday to evacuate more towns and villages threatened by floods after continued rain in the southwest of the country, state television reported, as the nationwide toll from the flooding reached 70.

“An evacuation order has been issued and we are recommending women and children to leave but we are asking the men and youth to stay and help us build floodwalls so we can keep the water out of these cities,” Shariati, said.

“The inflow into the Karkheh river dam has been high and officials have had to release more water as the dam was approaching its full capacity,” Shariati said, adding the flooding was the worst in 70 years.

The floodwater’s intensity has forced authorities to open emergency discharges at Karkheh dam, one of the largest in the area, thus sparking fears of fresh flooding.

The situation appears to be “critical” he said.

Heavy rain was forecast for Saturday in Khuzestan.

Khuzestan has an extensive range of dams, which have swelled upstream due to fresh downpours.

Interior Minister Abdolreza Rahmani Fazli warned that up to 400,000 people in Khuzestan could be exposed to the floods, IRNA reported.

The disaster has left aid agencies struggling to cope and seen 86,000 people moved to emergency shelters. The government has told citizens, and especially flood-affected farmers, that all losses will be compensated.

The country’s northeast was swamped on March 19 before the west and southwest of the country were inundated on March 25, killing a total of 45 people.

On April 1 the west and southwest were again swamped by floods when heavy rains returned to the area.

The government said the flooding had damaged nearly 12,000km) of roads, or 36 per cent of the country’s entire network.

The worst hit in the latest deluge was Lorestan Province where in some cities whole neighbourhoods were washed away and many villages are still cut off.

Fourteen deaths have been reported from Lorestan so far.

President Hassan Rouhani, whom critics have accused of mismanaging the response to the disaster, said on Wednesday the sanctions were also hampering aid efforts. As waters continue to submerge villages, the government said it had deployed more mobile medical units to the southern provinces.

Around 1,000 people have been airlifted by emergency helicopters to safety in recent days.

The head of Iran’s elite Revolutionary Guards reiterated the armed forces “were using all their power” to minimise the damage in Khuzestan.

Iranian drilling companies and other energy firms have been assisting rescue efforts in flooded areas, using pumps to remove water.

Iraq on Saturday closed its Sheeb border crossing with Iran to travellers and trade until further notice, Iraqi security sources said, as flooding continues to submerge villages in the south of Iran. The Sheeb crossing is in Iraq’s southern Miysan province.

Flooding has caused hundreds of millions of dollars of damage to Iranian agriculture, an official said on Thursday, as the parliament speaker questioned whether government funds would be adequate to compensate communities and farmers.