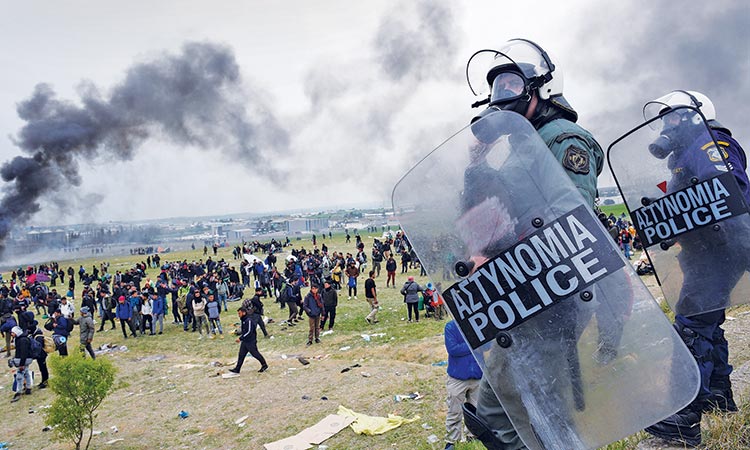 Riot police officers stand during clashes outside a camp in Diavata on Saturday. Reuters

DIAVATA: Greek police fired teargas on Saturday as angry migrants hoping to travel to northern Europe hurled stones and bottles after being barred from reaching a nearby border crossing, witnesses said.

Spurred by a false rumour about border openings that spread on social media, hundreds of migrants and refugees arrived and pitched tents on Thursday in a field next to the Diavata migrant camp near Greece’s border with North Macedonia.

There were dozens of tents in the field on Saturday and riot police formed a cordon to block an access route, parking 20 buses to stop the migrants from leaving the field.

At about midday, riot police fired teargas at dozens of people -- some carrying children -- who hurled stones and bottles as they tried to break through the police cordon and reach the main road leading to the border.

“We don’t want to fight with the Greek police,” said 36-year old Yaser, a Syrian refugee, sitting on a blanket with his baby son in his arms. “We want to go to Europe, we don’t want to stay in Greece,” he said through an interpreter. His 26-year old wife Fatemeh, who was carrying their six-month old baby, said the family was determined to stay at the makeshift camp.

“We will stay here until the borders open, we don’t have any other choice,” she said, standing close to where the clashes took place.

The scuffles lasted for several hours and thick plumes of smoke rose over the fields as police fired flares to disperse the crowds and angry migrants started small fires.

Most people refused to leave the site despite calls by ministers to return to accommodation centres and warnings that onward travel would be impossible. A few were persuaded to board the buses and officials said they hoped everyone would leave voluntarily by Sunday.

They had travelled to the area due to false reports of plans for an organised movement to cross Greece’s border with Albania in early April. The rumours quickly went viral on social media.

In neighbouring Turkey, nearly 1,200 migrants heading towards the border with Greece following false rumours that Ankara had opened its frontier were detained on Friday, Turkish media said.

Jana Frey, country director for the International Rescue Committee Greece, said the unrest highlighted “the amount of false information being presented to asylum seekers and refugees.”

“IRC staff have received reports of refugees who are being lured to the border by smugglers, who are feeding them lies about the border to Europe opening up,” she said.

Tens of thousands of refugees and migrants, mainly from Syria, Iraq and Afghanistan, are stuck in Greece from when Balkan countries shut their borders in 2016, closing the main passage towards northern Europe.

In 2016, thousands of people had camped for months in another field in Idomeni, on the border with Macedonia.

Asylum-seekers on Friday ended their occupation of the main Athens railway station as a protest demanding access to the border and passage to other EU states picked up steam in northern Greece. In Athens, around 200 migrants had earlier occupied the Larissis central train station, shouting “Saloniki” (Thessaloniki) and “Germany,” a reporter at the station said.

They had bought tickets to Thessaloniki, intending to also travel to the Diavata camp before authorities realised the plan and halted the train.

Some set up tents on the platform as small children ran about the tracks.

After the occupation shut down train services to the north of the country, Migration Ministry officials persuaded the migrants to end the protest and coaches were sent to take them back to their camps.

Last week, a German charity rescue ship has picked up 64 migrants, including women and children, stranded off Libya while trying to cross the Mediterranean for Europe.

The Watch the Med association said it received a call for help from the stricken inflatable.

The EU said on Wednesday it will suspend ship patrols that have rescued tens of thousands of migrants in the Mediterranean and brought them to Italy, amid deep resistance by populist-led Rome. 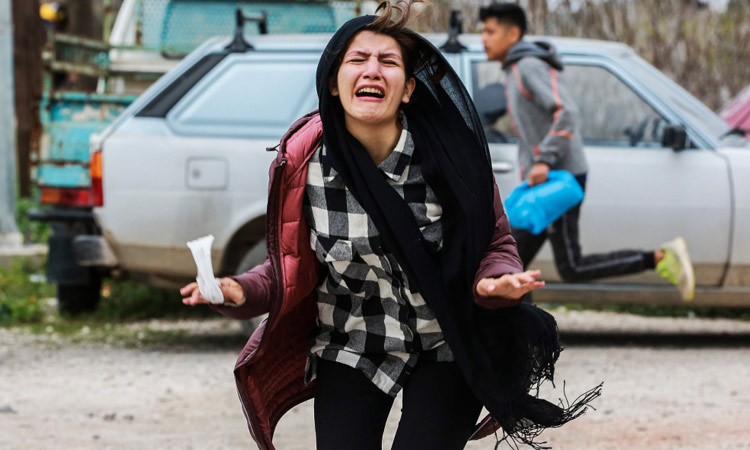 Thousands of migrants brandishing placards with 'freedom' written on them protested against tougher new asylum rules on Greek island of Lesbos.