Everything must be done to avoid bloodshed in Libya: UN - GulfToday

Everything must be done to avoid bloodshed in Libya: UN 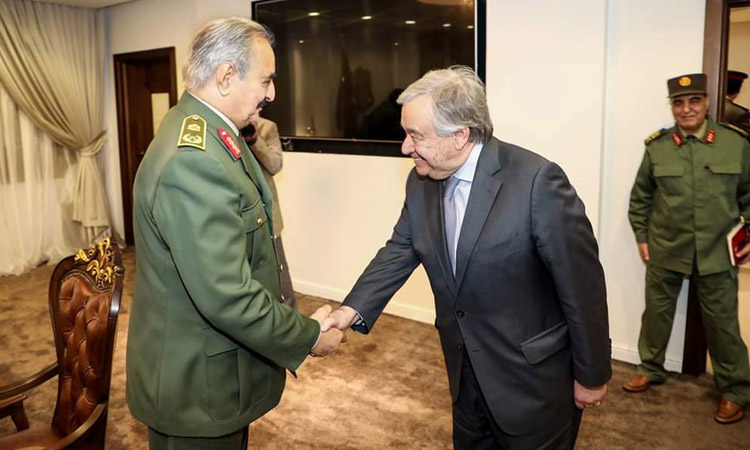 UN chief Antonio Guterres pushed on Friday to avoid a military escalation in Libya, meeting commander Khalifa Haftar a day after his troops launched an offensive to take the capital Tripoli.

“I leave Libya with a deep concern and a heavy heart. I still hope it will be possible to avoid a bloody confrontation in and around Tripoli,” Guterres said in a statement.

The lightning assault by forces loyal to Haftar was met with international appeals for restraint and an emergency meeting by the UN Security Council to be held later Friday.

Tunisia has tightened control on its border with Libya in response to the renewed conflict between rival factions there, the defence ministry said on Friday.

“The Ministry of National Defence has taken all necessary precautions to secure the southeastern border and face potential repercussions,” the ministry said in statement. 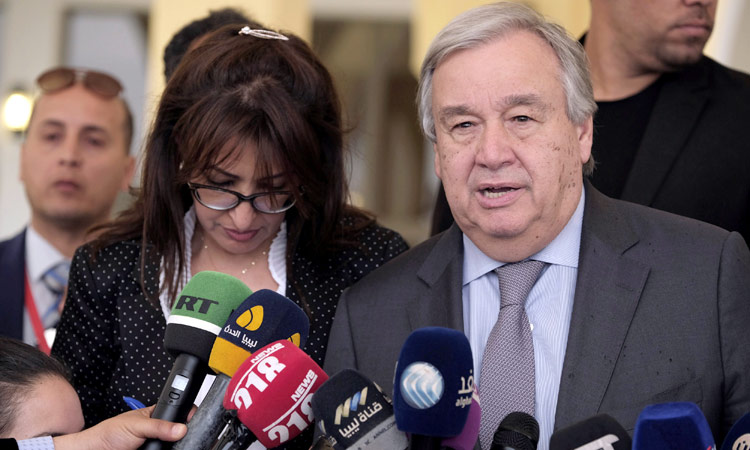 The United Nations chief met Haftar in the eastern city of Benghazi, an official from his self-proclaimed Libyan National Army said without giving further details.

Forces loyal to Haftar were pushed back on Friday from a key checkpoint less than 30km from Tripoli, checking their offensive on the capital, a security source said.

Pro-government militiamen from the coastal town of Zawiya, west of Tripoli, retook the base after a “short exchange of fire,” the source said on condition of anonymity.

The head of the UN-backed unity government, Fayez Al Sarraj, visited the checkpoint on Friday accompanied by military commanders.

“I leave Libya with a deep concern and a heavy heart. I still hope it will be possible to avoid a bloody confrontation in and around Tripoli.

The Zawiya militia is one of dozens that have proliferated since the 2011 overthrow of longtime ruler Muammar Qadhafi and are variously aligned with Sarraj’s government and a rival administration in the east backed by Haftar.

Most of the pro-Haftar fighters who briefly captured the checkpoint late on Thursday were rival militiamen from the town of Sabratha, further west along the Mediterranean coast.

Dozens of them were captured and their vehicles seized, the security source said.

The Tripoli Protection Force, an alliance of pro-government militias in the capital, said its fighters had taken part in the recapture of the checkpoint.

A convoy of vehicles from Haftar’s forces on Thursday pushed towards the city of Gharyan, some 100km south of Tripoli on Thursday, witnesses and military sources said.

Haftarsaid “the time has come” to take Tripoli in an audio message released on Thursday, pledging to spare civilians and “state institutions.”

A military vehicle of Misrata forces, under the protection of Tripoli's forces, is seen on the road of Wadi al Rabih south of Tripoli, Libya, on Friday. Isamil Zitouny/Reuters

The announcement of the offensive came as Guterres was in Tripoli for talks with Sarraj, ahead of a conference later this month on organising elections.

Sarraj on Thursday condemned Haftar’s “escalation” and said he had ordered loyalist forces to prepare to “face all threats.”

The United States and its allies issued a joint statement urging “all parties to immediately de-escalate tensions.”

“At this sensitive moment in Libya’s transition, military posturing and threats of unilateral action only risk propelling Libya back toward chaos,” they said.

Russia called for “all possible efforts to fully resolve the situation with peaceful political means.”

“We believe that the main thing is for any actions not to lead to renewed bloodshed,” Kremlin spokesman Dmitry Peskov told reporters.

Moscow added that it did not support Haftar.

Peskov said it was “necessary to continue all possible efforts to fully resolve the situation with peaceful political means.”

“We are monitoring the situation in Libya very carefully,” he added. Asked if Russia considered supporting Libya militarily, Peskov said: “No, Moscow is not taking part in this in any way.”

“The time has come to take Tripoli.

In a statement later on Friday, the Russian foreign ministry urged “all involved Libyan parties to show calm and restraint.” “There is a real threat of large-scale armed confrontation,” the statement said.

It called for “leading Libyan military-political forces” to “abandon armed methods in the struggle for power.” Guterres said he was “shocked” by the level of suffering of migrants at a detention centre in Tripoli which he visited during a visit to the Libyan capital.

“I was very moved and shocked by the level of suffering and especially by the level of despair that I found,” Guterres told reporters during the second day of trip to Tripoli during which he visited the Zara detention centre.

He appealed to the international community “to understand the need for international refugee law to be fully respected, and the need to address the migration problem in a way that is compatible with the defence of the interests of the state but also the human rights of the migrants.” 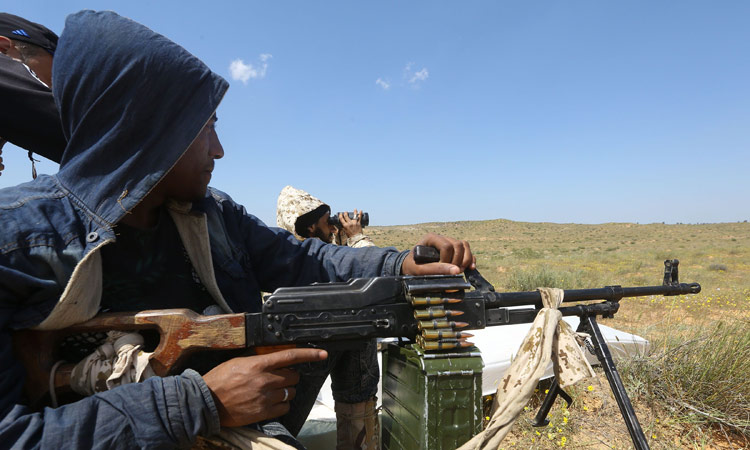