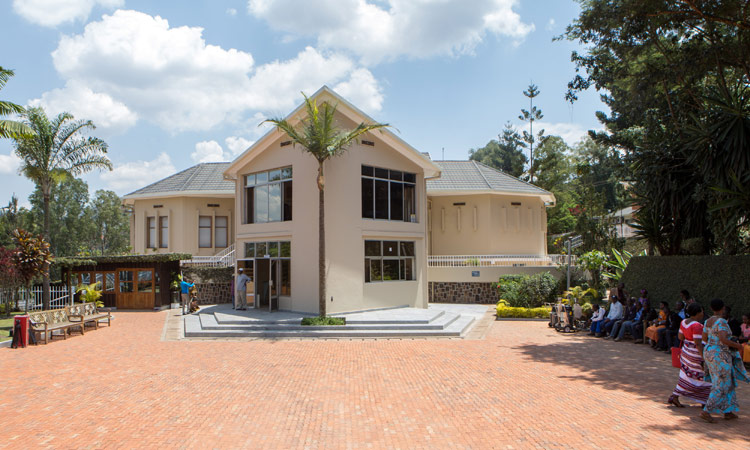 Visitors are seen outside the Genocide Memorial in Gisozi within Kigali, Rwanda. Jean Bizimana/ Reuters

Twenty-five years ago, Tasian Nkundiye murdered his neighbour with a machete.

The 43-year-old Hutu and a few other men from his Rwandan village chopped the Tutsi man to pieces - one horrific slaying during a 100-day genocide that killed an estimated 800,000 ethnic Tutsis and the Hutus who tried to protect them. Nkundiye was convicted of the killing and other crimes and spent eight years in prison.

Today he lives nearby the widow of the man he killed. And somehow they are friends - their children and grandchildren play and share lunch together, their cows graze in the same field.

“I am very grateful to her,” Nkundiye, now 68, said of the widow, 58-year-old Laurencia Mukalemera. “Ever since I apologized to her after prison life, confessing to my crimes and asking her for forgiveness, she has accepted me. I even leave my children with her when I am away.”

A quarter century after the 1994 genocide that killed 75% of the country's ethnic Tutsis, Rwanda has six “reconciliation villages” like Mbyo, where genocide survivors and perpetrators live alongside each other. Convicted killers re-integrate into society by publicly apologizing for their crimes. Survivors profess forgiveness. The villages are showpieces of President Paul Kagame's policy of ethnic reconciliation, although some critics say the communities are forced and the reconciliation is artificial.

About 3,000 victims and perpetrators live in the villages established by Prison Fellowship Rwanda, a Christian organization, and funded by the US government, the United Nations and other donors to promote healing in Rwanda from the gaping wounds left by the genocide. Those in the villages also get help with housing and school fees.

Rwanda's genocide was ignited on April 6, 1994, when a plane carrying President Juvénal Habyarimana was shot down and crashed in the capital, Kigali, killing the Rwandan leader, a Hutu. Rwanda's Tutsi minority was blamed for the crash, igniting a killing spree of revenge attacks targeting Tutsis across the country of 12 million people.

Jannette Mukabyagaju remembers the words of her father when the family heard the news that the president's plane had been shot down.

“We are now finished,” he said.

“That is the last time I saw my father. He died with the rest of the family members the following days,” Mukabyagaju, a Tutsi survivor, who is now 42, told The Associated Press. In the family of eight children, only Mukabyagaju, one sister and a brother survived.

Shrill broadcasts in the government media incited the killings, portraying Tutsis as dangerous, bent on dominating Hutus. During the genocide, political and military leaders also encouraged rape to further destroy the Tutsi ethnic group, which today makes up just 14% of the population.

Mukabyagaju's family lived in Muhanga, a village near a military barracks attached to the president's office in the capital, Kigali.

“The presidential guards from the military zone descended on the village, accusing all Tutsis, including children, of being behind the death of their president,” she recalls.

“It was useless to tell militiamen the children didn't have any idea about the president's death,” said Mukabyagaju, who was 17 at the time. “But as you know, during the genocide, all sense had gone.”

Disguising herself, Mukabyagaju managed to escape to a church in the nearby village of Kabgayi that gave refuge to thousands seeking protection. “The Tutsis working at the church helped us with food, but soon they, too, were killed by the militia,” she said.

For two months she hid in and around the church until the Rwanda Patriotic Front, a rebel group headed by Kagame, seized power, forcing out the Hutu extremists and bringing an end to the genocide.

Mukabyagaju said she asks herself why she survived. “I believe it was God's mercy that I didn't die,” she said. “I have decided to let anger go and forgive all people, including those who killed my family.”

Today Mukabyagaju lives in Mbyo, where 54 families of genocide survivors and perpetrators live side by side among the village's green fields. Rwanda's dark past is contradicted by the peals of laughter of children descended from both sides of the killing, playing and going to school together.

“We are grateful by the fact that Rwandans are united today,” said Frederick Kazigwemu, another convict released after serving nine years in prison for genocide crimes, including murdering a neighboring family.

“Seeking forgiveness from a family where you killed relatives is an act of courage. But after turning your heart to God, this was possible,” said Kazigwemu, who today is Mbyo's village leader.

Not all Rwandans think reconciliation has succeeded. Sam Nshimirimana, a Rwandan genocide expert and survivor, said forgiveness would be more meaningful if it were initiated by the survivors and perpetrators themselves and not promoted by the government or charitable organizations.

“The government tells perpetrators that once they apologize to the victims, they will be released” from prison, he told the AP. “Obviously, they apologize in order to be released. This is an artificial apology.”

At the same time, “many survivors forgive because they are poor and need shelters or school fees,” Nshimirimana said.

Ethnic reconciliation is a cornerstone of the rule of Kagame, Rwanda's de facto leader since the genocide ended in 1994 and the country's president since 2000, who is credited with bringing Rwanda stability, economic growth, improved health and education. Kagame also has pushed to have more women in political office and 64% of the representatives in Rwanda's parliament are women, the highest percentage of any country in the world.

In the early 2000s, Kagame's government enacted the laws that allowed those convicted of genocide crimes to walk out of prison if they apologized to survivors and sought their forgiveness. Both Nkundiye and Kizigwemu were released from prison under this arrangement.

However, Kagame's critics charge that he is intolerant of criticism and his government is repressive, jailing opposition leaders. Some opponents say that Rwanda's reconciliation is forced.

In Mbyo, however, it is hard to argue that the community is artificial.

“What we did was horrible,” said Nkundiye, who remains haunted by memories of the screams of helpless women and children and the sight of Tutsi men throwing themselves into rivers to drown rather than be chopped to death by machetes.

As for Mukalemera, the widow of the man he killed, “I didn't know that it was Nkundiye who killed my husband. He came and told me he did it and showed me where my husband's body was buried. When he confessed and apologized, I forgave him.”

She hugged Ndundiye in greeting as they met to discuss the upcoming planting season. “I found I could not live with anger forever,” she said.