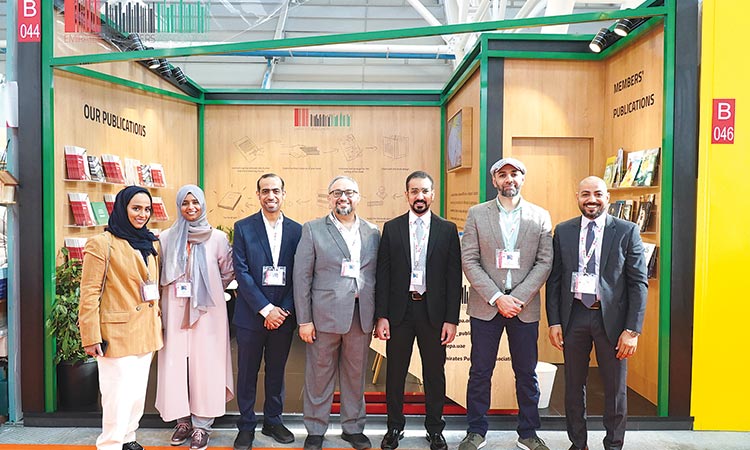 A group photo of the EPA member publishers who participated in the Bologna Children’s Book Fair 2019.

EPA’s participation comes in line with its keenness to support the Emirati publishing houses and enable them to take part in regional and global cultural events, with aims to promote their titles and expand their strategic relations with international publishers.

The five publishing houses expressed their gratitude to the EPA, for its continuous  support that enables them to prosper in the publishing industry.

The sponsorship also allows them to meet and exchange expertise with international children’s book publishers.

Rashid Al Kous, Executive Director of EPA, said, “At EPA, we are keen to elevate the publishing sector in general and particularly children’s books, which are instrumental in igniting imagination and building the capabilities of young people.

“These books contribute to raising children’s cultural awareness, and our dedication towards the cause,gets reflected by our participation in the Bologna Children’s Book Fair”.

He further said, “Recent studies indicate that majority of children in the UAE prefer to read Arabic books. However, there is a lack of variety in topics and online Arabic content, which drives children to read books in English and other foreign languages. Consequently, the growing consumption of content in foreign languages, has a negative impact on their Arabic skills.

This is the main reason that drives us to dedicate our efforts in supporting publishers of Arabic children’s books”.

“Writing and publishing quality children’s books is fundamental to the UAE’s inclusive cultural and developmental process. The focus on young generations is aimed at empowering them to take part in building our country and furthering the literary and scientific achievements, that adds value to the cultural process, a thought that flourished under the directives of the wise Leadership of the country”, he remarked.

During the Bologna Children’s Book Fair, the EPA met with a host of international cultural experts, including Beijing International Book Fair representatives to discuss EPA’s participation in the forthcoming edition. Meetings with Italian, Brazilian and Spanish publishers were also held to explore mutual cooperation with EPA’s affiliate members.

During a meeting with the ‘Bologna Fiere Group’, one of the leading companies in the exhibition sector, the EPA explored its first potential participation in the forthcoming edition of the China Shanghai International Children’s Book Fair 2019, as well as possible participation in the Bologna Book Fair and New York Rights Fair.

Founded in 2009, the EPA seeks to develop the publishing sector and represent the interests of the UAE’s publishing industry professionals by working on advancing their rights. It organises and takes part in regional and international conferences, exhibitions and book fairs.

Established in February 25, 2009, the Emirates Publishers Association (EPA) is a non-profit organisation dedicated to serving and developing the publishing industry in the United Arab Emirates (UAE) and to advancing the role of Emirati publishers through training and mentorship programmes and by improving publishing-related conditions and laws. EPA also aims to represent Emirati publishers at regional and international events, exhibitions and seminars on publishing.

Emirates Publishers Association works to disseminate the UAE’s intellectual output throughout the Arab world and worldwide. It focuses particularly on translations from and into Arabic, and the protection of intellectual property and related rights.