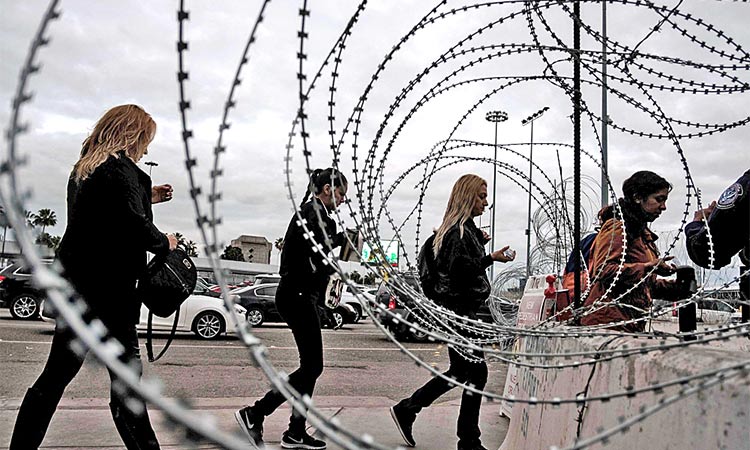 People queue at the San Ysidro crossing port to cross from Mexico to US on Thursday. Guillermo Arias / AFP

“This wall is unnecessary, and an abuse of power that will take away resources that could be used to help Americans across our nation,” James said on Twitter.

The states filed a lawsuit in February after Trump declared a national emergency to help build a border wall that was a signature of his 2016 campaign for president.

The motion for a preliminary injunction to block Trump’s effort that was filed late Thursday formalised that request.

Trump’s order would allow him to spend money on the wall that Congress appropriated for other purposes.

Congress declined to fulfill his request for $5.7 billion to help build the wall this year.

Trump retreated from his threat to close the US-Mexican border, warning he will instead impose car import tariffs if the major US trading partner does not do more to stop undocumented migrants and drug smugglers. “If Mexico doesn’t give the help, that’s OK, we’re going to tariff their cars,” Trump said at the White House. “I will do it. I don’t play games.”

Trump said he was giving Mexico one year to get the cross-border drug trade down or see him impose tariffs at 25 per cent.

If that does not work, closing the border would come next, he said.

Speaking without notes, full of digressions and often failing to finish sentences, Trump was not wholly clear on the details of his border policy changes.

“If Mexico doesn’t do what they can do very easily, apprehend these people coming in we’re going to tax the cars, and if that doesn’t work, we’re going to close the borders,” he said.

“We’re also going to do something having to do with tariffs on drugs because hundreds of thousands of lives (are) ruined a year in our country,” he said. “If the drugs don’t stop we’re going to put tariffs.”

“For the Mexican government, it is very important to keep migration issues and trade issues separate,” she told a press conference.

“The United States sometimes mixes the two issues. To us, it’s very important to keep the ratification of the trade agreement on one track and migration-related issues on another,” said Marquez, referring to the newly negotiated USMCA or United States-Mexico-Canada deal.

“In terms of any new tariffs, we would have to discuss them in terms of a relationship between two trade partners who are in the process of modernizing a trade agreement,” she added, referring to NAFTA, the existing trade agreement that the new USMCA deal seeks to update.

Mexico is doing a “really great job” at “grabbing and taking” people, he said.

But suggesting that he wants immediate results, he added that “maybe by the end of this news conference or tomorrow that will stop, and if that stops, we are doing a big tariff.” Regardless, the tariffs option signaled a retreat from previous suggestions that the border might be shut down, at least in parts, within days.

Separately, Trump confirmed on Friday he will skip the “boring” White House correspondents’ dinner later this month, saying he’ll hold a rally instead.

Trump, who launches almost daily verbal attacks on what he considers a hostile media, has missed the two previous sessions of the annual get-together in Washington.

Asked if he’d go to this year’s gathering, on April 27, he told reporters at the White House that “the dinner is so boring and so negative that we’re going to hold a very positive rally.”

Trump said his rally, in a still undecided location, will be “a big one.”

Appearances by presidents at the black tie occasion have previously been a tradition.

However, Trump has a uniquely combative relationship with the media, which he denounces as “fake news,” except in a handful of cases, including his favored Fox News network.