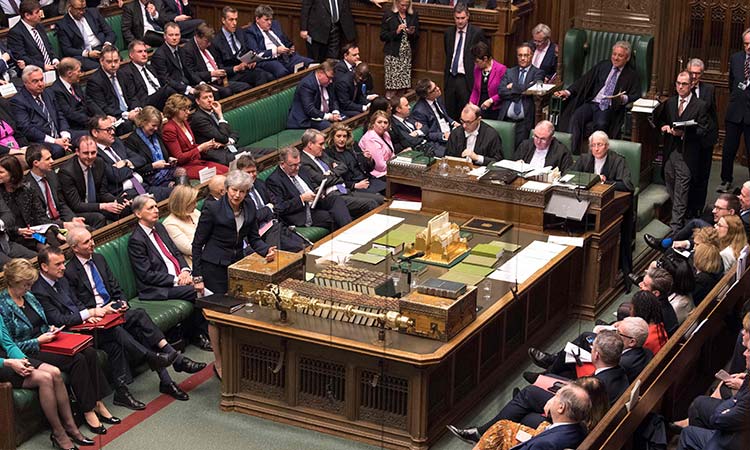 Theresa May speaks during question and answer session in the House of commons in London on Wednesday. Mark Duffy / AFP

Britain's parliament was forced to close early on Thursday after a leak in the 19th century Gothic palace caused water to rain down into the debating chamber.

Speaking over the noise of pouring water, Member of Parliament Justin Madders, said: "I hope I can complete my speech before rain stops play. I think there is probably some kind of symbol, about how many people view how broken parliament is, going on there."

Thursday's sitting in the lower chamber, the House of Commons, was then ended more than two hours early.

The upper chamber, the House of Lords, continued to debate Brexit in a separate part of the building.

The Palace of Westminster - parts of which date back to 1097 - has been slipping into disrepair for decades, requiring frequent repairs and upgrades. Much of the crumbling limestone exterior is clad in scaffolding.

Plans are being made for a multi-billion pound restoration programme which could require parliament to be temporarily relocated to a separate building, but the process has been delayed, with many lawmakers opposed to giving up their traditional setting.

Britain’s government will seek to extend the period during which parliament does not normally sit, shutting it for around a month until Oct.14, as part of a drive to prevent politicians