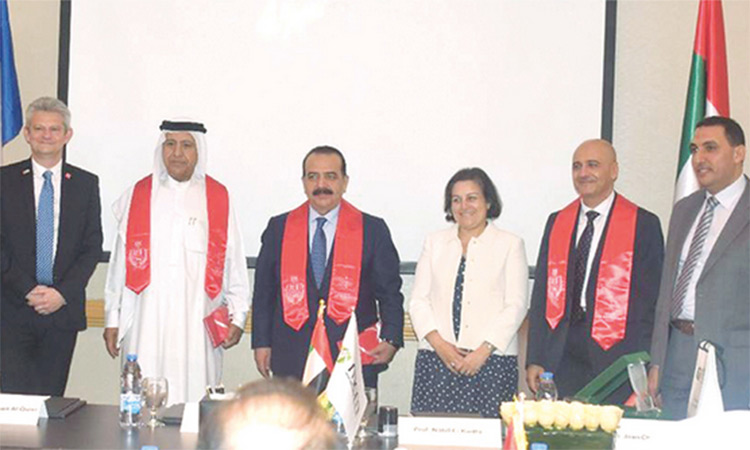 The strategic partnership between the Mena College of Management and EM-Normandie University, France, was highlighted.

DUBAI: In the framework of developing its academic programmes and expanding its strategic partnerships in the fields of hospital, hotel and human resources management, the Mena College of Management in Dubai has signed a memorandum of understanding with the EM-Normandie University, France.

The signing ceremony was attended by Mirza Al Sayegh, Director of the Office of Sheikh Hamdan Bin Rashid Al Maktoum, Raja Rabia, Consul General of France in Dubai and Dr Nabeel Al-Kahdi, President, Mena College of Management. Those who were present included the delegation of the French University represented by Dr John Christoph Hugiel, Deputy Director General of EM-Normandie University in France, Khair Al-Din Al-Mukhtar, Director of International Relations and the Gulf, and Salim Ahmed Al-Qaisi, partner, director and member of the Board of Trustees of the College and a group of members of the Board of Trustees, academic and administrative staff and some students.

During the event Said Bin Salama Al Ameri recited the poem ‘Human Resources’ to welcome the visiting French delegation. Dr Nabeel Al-Kahdi lauded the strategic partnership between the Mena College of Management and the EM-Normandie University, France. He praised the support received by Salem Al Qaisi, pointing out the importance of Dubai as a dynamic international city. As a model of this dynamic, the importance and prestige of the prestigious French University, which left a global footprint in the field of university education, was also emphasised by him, who welcomed this cooperation to launch academic and executive programmes.

Raja Rabia, Consul General of the French Republic in Dubai, praised everyone for giving this opportunity to be present at the UAE-French event in the field of academic cooperation. She also expressed her happiness for being present for the fourth time since she assumed her diplomatic duties as Consul General at the signing of the MoU and strategic partnerships between the UAE and French universities. She also emphasised the importance of university education and the academic programmes offered by the French University of EM-Normandie in view of its long history and wished the faculty of management and its students success.