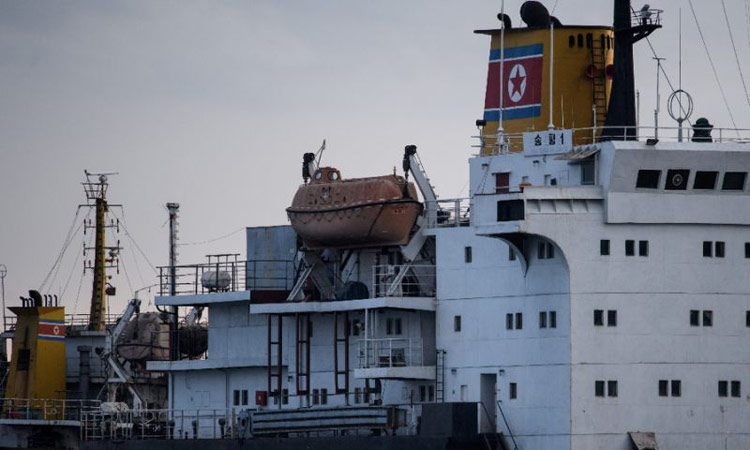 A ship docked in a North Korean port near Russia. UN Sanctions on Pyongyang over its weapons programme include curbs on shipments of oil and fuel. File photo/ AFP

SEOUL: A South Korean ship has been detained for six months on suspicion of violating UN sanctions against the nuclear-armed North, Seoul’s foreign ministry said on Wednesday.

Pyongyang is sanctioned over its weapons programme under multiple UN Security Council resolutions, which include curbs on shipments of oil and fuel to the isolated regime.

But the North has been seeking to get around the measures, with a recent UN report saying that Pyongyang was securing deliveries of fuel through ship-to-ship transfers in international waters.

Seoul’s foreign ministry said a South Korean ship and three others had been detained in the country, suspected of undermining the economic measures against the North.

“This is the first time a South Korean vessel has been detained for allegedly violating UN sanctions,” a ministry official told AFP.

The ship — held in the southern port of Busan since last October — is suspected of carrying out an illicit ship-to-ship transfer of oil to a North Korean tanker, according to the Yonhap News Agency.

If it is found to have made the transfer, the South Korean vessel would likely be blacklisted by the UN, Yonhap reported.

The foreign ministry official did not explain the delay in the authorities making the detention public.

South Korean President Moon Jae-in has sought to engage the North to bring it to the negotiating table, dangling economic carrots before it in the form of inter-Korean projects — many of which would violate the current sanctions rules if implemented.

Questions were also raised over whether it had undermined the measures by providing supplies to set up an inter-Korean liaison office north of the border.

Last year three South Korean firms were caught importing millions of dollars worth of coal and iron from the North in 2017.

Immediate sanctions relief was a key demand of the cash-strapped North when leader Kim Jong Un met with US President Donald Trump in Hanoi in February for a second summit that ultimately broke down.

The US has since imposed sanctions on two Chinese shipping companies for doing business with North Korea, urging the maritime industry to do more to end Pyongyang’s “illicit shipping practices.”

A UN report issued last month highlighted the North’s sanctions-evading tactics at sea and recommended member countries keep a closer watch over vessels in their own waters.

The burning coal, kept in a bowl, was meant to keep them warm in the cold weather.