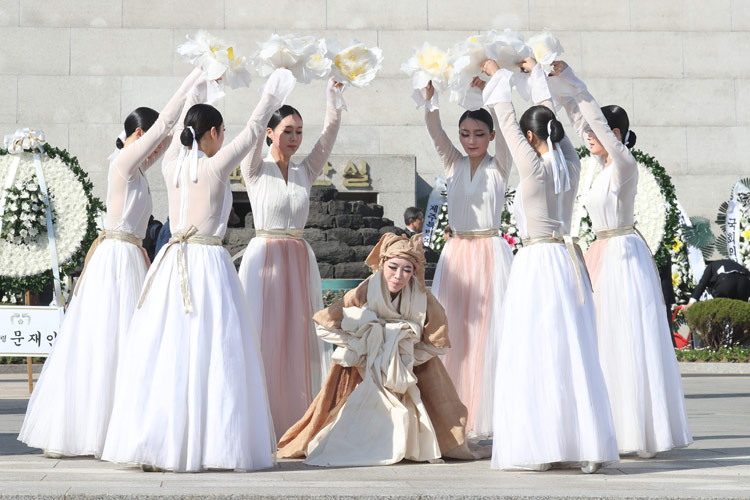 Performers mark the 1948 Jeju uprising during a rememberence ceremony on Jeju island on Wednesday. AFP

SEOUL: South Korean police apologised for the first time on Wednesday over massacres that killed 10,000 people decades ago and the military expressed deep regret as President Moon Jae-in seeks to re-examine history.

On April 3, 1948 members of the communist Workers' Party of Southern Korea — an ally of the organisation that still rules the North — launched an armed uprising on the southern island of Jeju, attacking a dozen police stations.

At the time the division of the peninsula had yet to be formalised and the Korean War was still two years away, but the US-supported South was ideologically split following the end of World War II and Japanese colonial rule.

The revolt was quickly put down, but while sporadic clashes continued more than 10,000 civilians were killed by South Korean security forces over the next six years, including beyond the end of the Korean War.

“We apologise to the innocent people whose lives were sacrificed,” said Min Gap-ryong, the commissioner general of the Korean National Police Agency, at a commemoration of the uprising's 71st anniversary.

“We promise to be an organisation that only thinks about and works for Korean citizens so that a tragedy like this will never repeat in our future.”

The country's defence ministry also expressed “deep regret” to the victims, while stopping short of a full apology.

The Jeju Incident, as the events are known, remains a highly politicised issue in South Korea, as do some other aspects of the country's post-war history.

Some Jeju-based research and NGOs have claimed it was “Jeju people's resistance against national division and 'American Imperialism.’”

The police apology and ministry's expression of regret come after left-leaning South Korean President Moon Jae-in has repeatedly spoken on the importance of “setting our history right.”

Moon, who brokered talks between Washington and Pyongyang, has stressed the independence struggle against Japan's colonial rule is at the heart of national identity in both Koreas, while framing the South's right-wing — who say the victims of Jeju were all communist rebels — as descendants of pro-Japanese collaborators.

Last year, Moon became the first South Korean president in more than a decade to attend the annual memorial ceremony on Jeju.

At the event he said: “Young people who were falsely accused of being communists during the April 3 Incident defended their country in the face of death. Ideology was nothing more than a cause that justified the massacre.”

In 2003 the then South Korean president Roh Moo-hyun — whom Moon served as chief of staff — offered an apology to the victims of the Jeju incident.