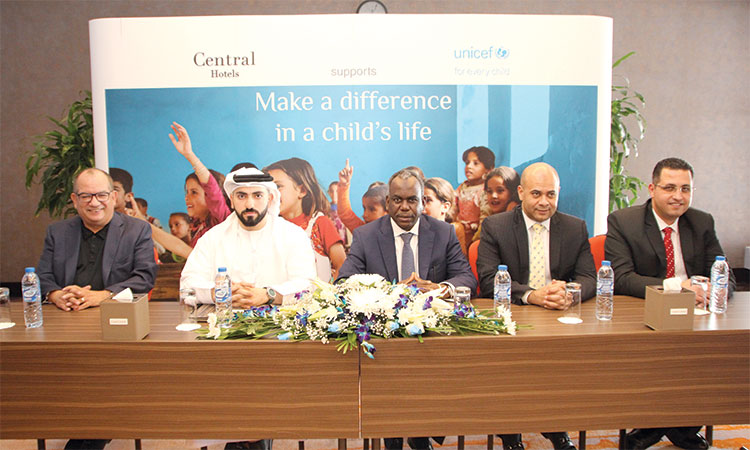 At the press meet witnessing signing of the agreement to help refugee children.

DUBAI: Central Hotels and Unicef have renewed an agreement to help some of the thousands of children fleeing poverty and conflict in the Middle East.

In a press conference, the representatives inked the agreement which was signed by Abdulla AlAbdulla, Chief Operating Officer of Central Hotels and a member of Unicef Gulf Area Office Leadership Circle of Champions for Children and Young People.

Abdulla AlAbdulla said, “We are committed to support Unicef‘s campaign to ‘Make a difference in a child’s life.”

“Every initiative in this journey is a major advance in creating a better future for children by helping them achieve their full potential. We look forward to our collaboration with Unicef as every life changed is a testament to the difference we can make by working together,” he said.

ElTayeb Adam, Uniecf’s GAO Representative said, “We are very grateful to Central Hotels for joining us in our mission. Every child deserves a fair chance to life. By supporting Unicef, you are not only making a difference to a child’s life today, you are making a difference to children everywhere. Every dollar you donate helps children around the world to grow up healthy, stay protected from harm and to go to school.”

The money is raised through an optional 10-dirham surcharge on guests’ bills.

Unicef has been present in the UAE for more than 40 years. The Leadership Circle of Champions for Children and Young People is a network of Unicef supporters and advocates committed to advancing the rights of children.

ElTayeb Adam told Gulf Today, “there are 30 million children living in below the poverty and have been affecting by various conflicts and need urgent assistance in Lebanon, Jordan and other such places where refugees are being residing. We with the support of our partners will carry out further efforts to provide relief to these families especially young children in conflict zones,” he added.