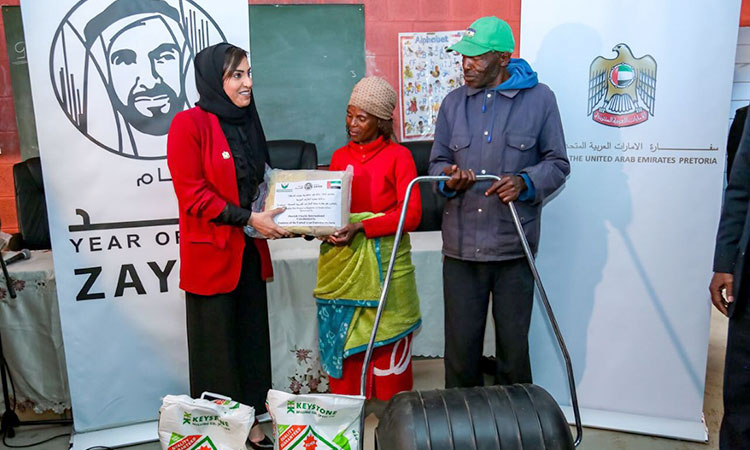 UAE Government supports the WFP with necessary assistance and logistics.

DUBAI: A World Food Programme (WFP) official has praised the UAE’s contributions and emergency response assistance to humanitarian crises across the world.

In an interview with the Emirates News Agency (WAM), Mageed Yahia, WFP Country Director and GCC Region Representative, said that the UAE Government readily supports the WFP with necessary assistance and logistics to support individuals affected by humanitarian crises, whether caused by natural disasters or in conflict zones.

Commenting on the scope of the UAE’s aid, Yahia said that the country’s contributions have reached as far away as Cuba.

He added that the country has supported WFP operations in Syria, as well as in Bangladesh to assist Rohingya refugees.

The WFP Country Director highlighted the example of the most recent UAE assistance, to Mozambique following the Category 3 Cyclone Idai that struck the port city of Beira and caused unprecedented flooding across much of the country.

The UAE, Yahia added, has provided 100 metric tonnes of ready-to-use supplementary food, RUSF, and an plane to deliver the aid to Mozambique. “This is very important for this type of emergency assistance [to reach] people who have lost their livelihoods and their homes.” The WFP has so far provided food assistance to over 170,000 people in Mozambique, and intends to reach, as soon as possible, all 1.7 million people in need of emergency food in the country.

The UN programme estimates that it needs $133 million for food assistance, logistics and emergency telecommunications support in Mozambique over the next three months.

These have been airdropped to isolated pockets of people stranded by the floodwaters in the Nhamatanda, Buzi and Chimoio districts. The fortified biscuits are often used in emergencies as they are nutritious, easy to transport and do not need cooking.

Meanwhile, the Emirates Red Crescent, (ERC) has reinforced its efforts to assist people affected by Cyclone Idai in Mozambique, benefitting over 75,000 people in 17 districts in the three provinces that were most affected by the cyclone, which hit three countries in the southeast of the African continent.

The aid highlights the position of the UAE’s wise leadership and its commitment to its humanitarian responsibility towards affected African countries, and is in implementation of the directives of His Highness Sheikh Mohamed Bin Zayed Al Nahyan, Crown Prince of Abu Dhabi and Deputy Supreme Commander of the UAE Armed Forces, and the monitoring of Sheikh Hamdan Bin Zayed Al Nahyan, Ruler’s Representative in Al Dhafra Region and Chairman of the ERC.

The humanitarian mission continues to deliver aid to those affected in Mozambique, despite the challenges posed by the cyclone, such as heavy rainfall and floods.

The ERC utilised helicopters to drop aid in affected areas with displaced people.

The ERC delegation strengthened its cooperation with the National Disaster Authority of Mozambique and drafted a unified response plan to increase the number of beneficiaries.

It also drafted a health response plan to counter the emergence of diseases, especially malaria and other epidemics.

The UAE announced that it would provide Dhs18.3 million in emergency aid to Mozambique, Zimbabwe and Malawi, following the devastation incurred by Idai.

Yahia noted that the WFP “enjoys a generous contribution” from the UAE of $3 million per annum for the programme’s office and warehouse in Dubai. He went on to mention that UAE assistance has “significantly increased in the last two years.” “In 2018, we received over $220 million for our Yemen operations,” Yahia said.

He noted that the bulk of the contributions address the vulnerable situation faced by Yemenis.

The WFP Country Representative said that there are 18 million Yemenis who live in a state of food insecurity, 14 million of which face severe insecurity.

“We are able, from generous contributions, particularly from the UAE government, to scale up operations,” Yahia explained, adding that the WFP can now reach 12 million Yemenis, up from the previous figures of eight million individuals in need.

“It is important that this support continues, because the humanitarian situation in Yemen is becoming more and more fragile,” he warned.

In February, the WFP reported that it requires $1.5 billion to ensure uninterrupted food assistance in Yemen throughout 2019.

The convoy consisted of 1,000 food baskets, for distribution to 1,000 families in Al Mahfad.

Mohammed Taleb Al Rabie, Director General of Al Mahfad District welcomed the visiting ERC team and extended thanks for their efforts to provide assistance to the population in the district.