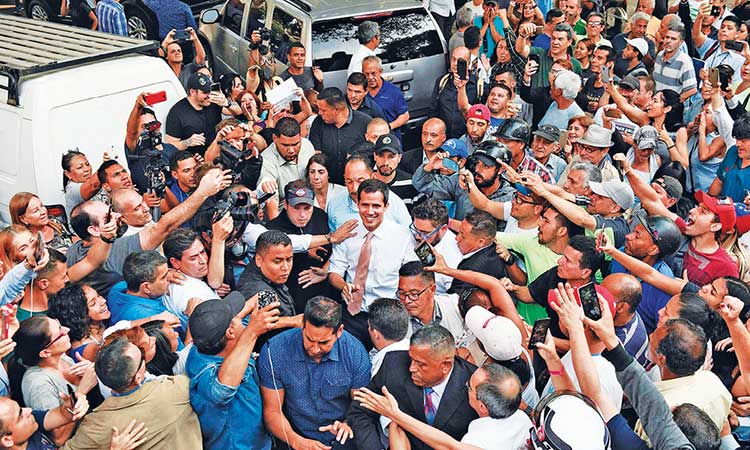 CARACAS: Venezuelan President Nicolas Maduro replaced his electricity minister on Monday in a move to address a series of blackouts plaguing the country, while opposition leader Juan Guaido called on supporters to continue taking to the streets.

Separately, Venezuela’s chief justice on Monday asked lawmakers to strip opposition leader Juan Guaido of immunity, taking a step towards prosecuting him for alleged crimes as he seeks to oust Maduro.

The change came as Maduro reiterated plans for a 30-day “load administration” plan, which he first mentioned last week and which Venezuelans widely assume will be a way to ration electricity.

“Some changes are needed to strengthen, take responsibility for, and develop the new phase of this plan,” Maduro said.

Guaido, the leader of the opposition-controlled National Assembly who in January invoked the country’s constitution to assume an interim presidency in a challenge to Maduro’s legitimacy, said it was “very clear that this regime has no solution to the crisis.” “Every time the power goes out, or we do not have water, or we do not have gas, guess what we are going to do?” he said at an earlier rally at the country’s Catholic University. “We are going to protest, we are going to make demands, we are going to take to the streets of Venezuela, because it is our right.” Demonstrators took to the streets throughout Caracas on Sunday and Monday, with small groups of people blocking roads to demand water.

On Sunday night, police fired gunshots after some residents in Caracas set up burning barricades, according to Reuters witnesses.

Maduro appeared on state TV Monday to announce that an engineer with 25 years of experience, Igor Gaviria, will serve as the next electricity minister, heading the state-run Corpoelec. He’s replacing a military general, Luis Motta Dominguez.

“I’ve lost him to a period of rest,” Maduro said, adding that students will return to class on Wednesday.

Expressing her confusion, office worker Raquel Mayorca said she didn’t know if her lights were off because of another power failure — or whether it was part of the government’s plan.

“We are worse off now more than ever,” she said, adding that the power was out on one side of the street, but working on the other. “We do not know if the light went out due to a blackout, or whether they took it away because of the rationing.” Supreme Court Justice Maikel Moreno said Guaido should be prosecuted for violating a ban on leaving the country when he went on a tour of Latin American nations that back a change in Venezuela’s government.

The opposition leader is also accused of inciting violence linked to street protests and receiving illicit funds from abroad.

It’s unclear when the pro-Maduro National Constituent Assembly will consider whether to remove Guaido’s immunity from prosecution as head of the National Assembly.

Guaido dismissed the Maduro-stacked high court and Constituent Assembly as illegitimate and continued his calls for Maduro to step down.

“We must unite now more than ever,” said Guaido at a Caracas university earlier Monday. “We must mount the biggest demonstration so far to reject what’s happening.” Many Venezuelans had resigned themselves to a bleak reality.

“I haven’t had water at home for 15 days,” said Maria Rojas, a 57-year-old homemaker looking for a source to fill her jugs. “You try to find water in the street that is more or less safe to drink.” Meanwhile, US officials in Washington said on Monday they will do “everything possible” so that a Guaido representative can fill Venezuela’s seat in the Organization of American States (OAS), a body that promotes economic, military and cultural cooperation among its members.

US Ambassador Carlos Trujillo was optimistic about the possibility that Gustavo Tarre will take Venezuela’s seat by gaining enough votes.

“We have many friends who are very interested in the Venezuela issue,” Trujillo told reporters after a brief ceremony in which he assumed the rotating presidency of the OAS Permanent Council. “There are some who have not recognised Guaido but know that what happens in Venezuela is unacceptable.”