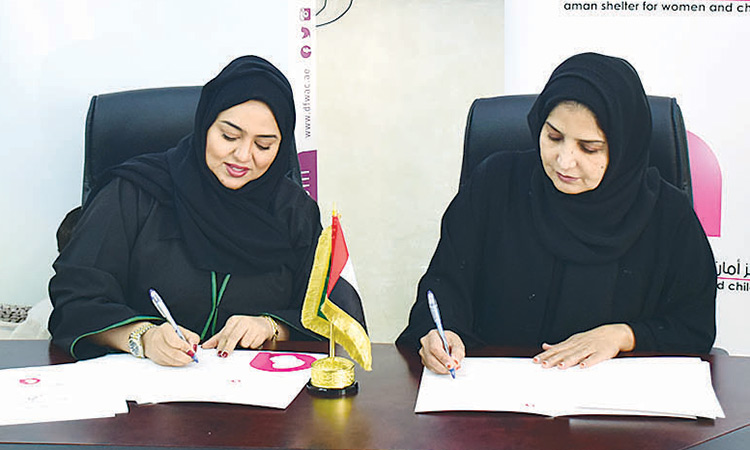 Afra Al Basti (right) and Khadija Al Aajel at the signing of the memorandum of understanding at the Aman headquarters.

DUBAI: Two of six shelters across the UAE have enhanced their collaboration against all forms of violence against women and children through the signing of a memorandum of understanding (MoU).

Among others, the MoU specifies that both government and non-profit organisations (NPOs) are going to share and transfer cases as deemed necessary through the buildup of a unified digital system.

The MoU lays down collaborative efforts by way of technical support, coordination in joint programmes, awareness and education campaigns, as well as in carrying out research studies.

It is expected that both centres will endeavour in more training workshop exchanges and similar activities in order that their respective management and personnel would be able to better serve not only their localities but everyone in the UAE.

DFWAC was established in 2007 under the directives of His Highness Sheikh Mohammed Bin Rashid Al Maktoum, UAE Vice President Prime Minister and Ruler of Dubai and in press conferences thereafter, Al Basti and other officials have repeatedly stated that some abused women and children, and human trafficking victims from other emirates have sought their help.

At the March 14, 2019 press conference on the release of the DFWAC Annual Report 2018, DFWAC-Care and Social Services director Ghanima Hassan Al Bahri reiterated that they have been receiving calls for assistance and some cases were even directly referred to them by concerned individuals from all over the UAE.

For these and as practiced, DFWAC links up with concerned authorities as it also has coordinators in other emirates.

On Sunday, Al Basti, stressing that DFWAC is open to all individuals and groups working for the protection of women and children, also said she is looking forward to the cooperation with Aman Centre as a “national duty to implement the UAE leadership’s vision of cooperation and coordination among various parties for excellence.”