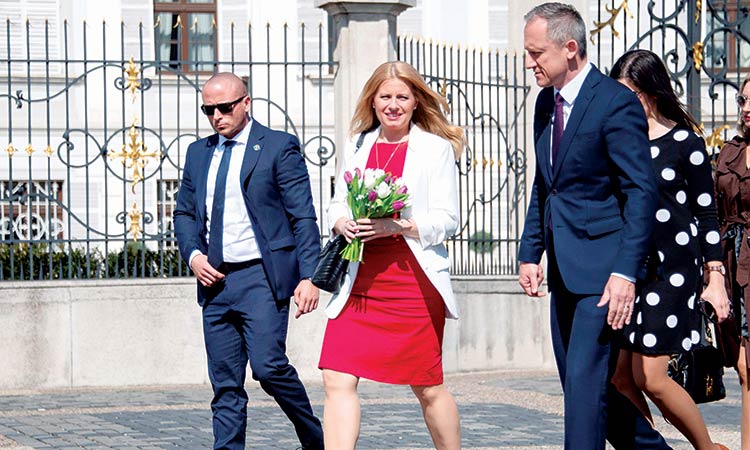 Zuzana Caputova (centre) arrives for an interview in front of the Presidential palace in Bratislava on Sunday. Agence France-Presse

Bratislava: The election of Zuzana Caputova as Slovakia’s first female president was greeted on Sunday as a vote for change, with the anti-graft activist expected to provide a check on a government tarnished after last year’s murder of a journalist.

The 45-year-old environmental lawyer’s clear victory on Saturday over the ruling party’s candidate was a blow to the populist-left Smer-SD - the largest grouping in parliament - and could spell trouble for them in the EU elections and next year’s general vote.

She is a relative political newcomer who rose to national prominence in the aftermath of the shootings of investigative journalist Jan Kuciak and his fiancee in February 2018, which sparked mass protests and toppled the then-premier.

Caputova won 58.4 per cent of the vote according to a final tally of results released Sunday, compared with 41.6 per cent for her ruling party rival, EU energy commissioner Maros Sefcovic.

“A candidate embodying democratic forces has won, and Sefcovic, who was a symbol of continuity, has lost,” analyst Grigorij Meseznikov said.

Headlines from the country’s newspapers on Sunday suggested the vote was a fresh start for the central European nation of 5.4 million.

“Zuzana Caputova gives us hope but the real fight will only come now,” said Dennik N, a leading opposition daily.

She ran on the slogan of “Stand up to evil” but made a point to keep her rhetoric hostility-free.

“Let us look for what connects us. Let us promote cooperation above personal interests,” she said as the results rolled in.

The office of president is largely ceremonial, but the role does involve ratifying international treaties, appointing top judges. The president is commander-in-chief of the armed forces and can veto laws passed by parliament.

Analyst Aneta Vilagi predicted Caputova will “engage in a purposeful confrontation with the government... rather than become an opposition president criticising everything the ruling coalition does.” Yet “she will represent a stronger system of checks and balances in relation to the government than Sefcovic would have.”

Caputova, who will be sworn in on June 15, is no stranger to tough battles. She is known for having successfully blocked a planned landfill in her hometown of Pezinok after a decade-long grassroots campaign.