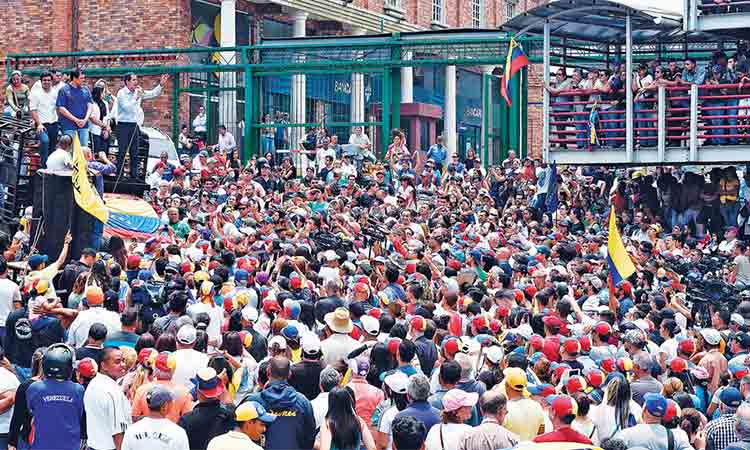 Caracas: Venezuelan security forces fired tear gas on Saturday to disperse demonstrators who turned out in Caracas to protest massive power outages that have kept much of the country in darkness since early March.

AFP journalists on the scene said the security forces blocked opposition protesters from concentrating at certain points in the western side of the city.

A new blackout hit Caracas and other major Venezuelan cities on Friday, the third major electricity outage in the crisis-plagued country this month.

The blackout began around 7:10 pm (2310 GMT), leaving the capital as well as cities including Maracaibo, Valencia, Maracay and San Cristobal without electricity, according to users on social media networks.

It is the third time since March 7 that a major power outage has hit Venezuela — worsening the already-dire economic and living conditions in a country that is witnessing a major political showdown between President Nicolas Maduro and opposition chief Juan Guaido.

Maduro has blamed the previous outages on sabotage, but experts have said that infrastructure crumbling from years of neglect is a more likely culprit than outside interference.

Earlier on Friday, the Red Cross said it would begin impartially distributing aid in Venezuela in two weeks, brushing aside the threat of political interference amid the Maduro-Guaido power struggle.

Malnutrition and disease are on the rise as living conditions plummet in the oil-producing Latin American nation, which is spiraling ever deeper into economic chaos during a protracted political crisis.

“We estimate that in a period of approximately 15 days we will be ready to offer help,” said Francesco Rocca, head of the International Federation of the Red Cross and Red Crescent.

The United States — which considers Guaido interim president along with some 50 other countries — welcomed the announcement as a “real opportunity.” Rocca told reporters in Caracas the organisation would begin distributing aid mid-April, including tonnes of mostly US food and medical supplies that Maduro has to date refused to allow into the country — leaving it stockpiled for weeks on the borders with Colombia and Brazil.

The Red Cross — aiming to reach 650,000 people initially — would act according to its principles of “impartiality, neutrality and independence,” he said, “without accepting interference from anyone.”

Meanwhile, in a boost to Maduro, a Chinese plane loaded with 65 tonnes of medical aid landed in Caracas on Friday. His government celebrated it as a victory over US sanctions, which the socialist leader blames for the economic crisis.

Though unpopular, Maduro has the upper hand at home, thanks to loyalty from his military chiefs and, since last weekend, the presence of 100 Russian troops.

The Russian deployment to Venezuela has drawn fire from Washington, but Caracas’ defense minister said Friday that “no one should be alarmed” by their presence.

“We are overcoming the purported siege, the blockade, which has been undertaken by President Trump and the diabolical puppet from here in Venezuela,” said vice-president Tareck El Aissami, referring to Guaido.

El Aissami, on the tarmac to meet the Chinese plane, said the medical supplies were the “first cargo of several that start from this moment.” It includes analgesics, surgical equipment and medicine for diseases such as diabetes.

Speaking at a news conference in Caracas, Rocca said agreements had been put in place to guarantee aid distribution, but declined to give details.

In Washington, Elliott Abrams, the envoy heading the US effort to oust Maduro, praised the Red Cross initiative and credited appeals by Guaido.

“This looks like a real opportunity, and we think that it is a response to the efforts that interim President Guaido has been making,” Abrams told reporters in Washington.

“So it’s very welcome, we hope it works, and — assuming that it does, which we do — the United States would be happy to put some of our aid into this method of reaching the Venezuelan people,” he said.