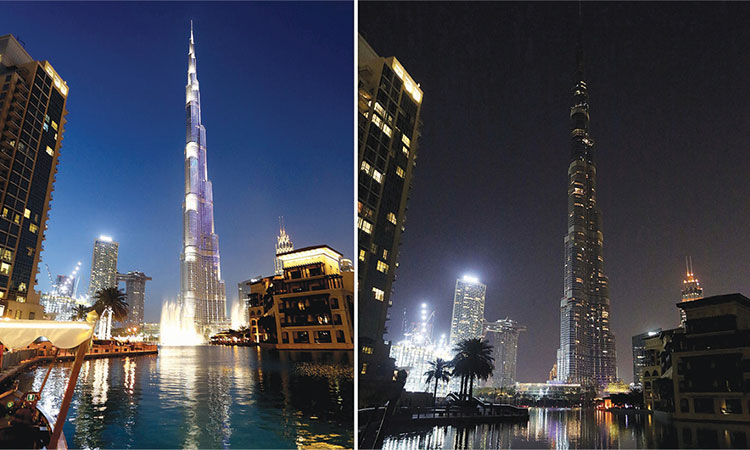 Burj Khalifa before and after switching off all non-essential lights to mark Earth Hour on Saturday. Kamal Kassim / Gulf Today

NEW YORK: During his participation in the High-Level Meeting on Climate and Sustainable Development for All, convened by Maria Fernanda Espinosa, President of the United Nations General Assembly in New York, Dr Thani Bin Ahmed Al Zeyoudi, UAE Minister of Climate Change and Environment, reiterated the country’s green commitment and support for ambitious and innovative global climate action.

Delivering the UAE National Statement at the meeting, Dr Al Zeyoudi said: ‘As the host of the global preparatory meeting for the 2019 Climate Summit, the UAE is honoured to partner with Antonio Guterres, UN Secretary General, to drive forward global climate action at such a critical time. Together, the preparatory meeting in the UAE and the Summit in New York represent international engagement and cooperation on climate change at the highest-level since the milestone Paris Agreement in 2015.’

He added: ‘At a time of growing cynicism about international cooperation and multilateral climate action, the UAE is honoured to be able to host such significant deliberations — in the heart of the global hydrocarbon economy — to show that ambitious climate action can, does and always will make sound business sense.’

Reflecting on efforts to promote renewable energy in the UAE, Dr Al Zeyoudi said: ‘As the home of the International Renewable Energy Agency, and with some of the most ambitious domestic clean energy targets in the world — 27 per cent by 2021 and 50 per cent by 2050, the UAE has broken the world record for the lowest solar energy cost multiple times through leveraging innovative public private partnerships. Given this capacity, we have been able to deploy large-scale renewable energy projects, such as the 100 MW Shams 1 CSP plant in Abu Dhabi, and the 5,000 MW Mohamed Bin Rashid Al Maktoum Solar Park, currently under development in Dubai.’

Pointing out that the UAE’s focus on renewables is not confined to its own boundaries, the Minister said: ‘We have also gone global in our advocacy and support for renewables. The UAE is a major investor in renewable energy projects and companies and has committed around US$1 billion in grants and soft loans for climate projects internationally — making climate change a core priority in its partnerships with fellow developing countries.’

Furthermore, the UAE minister hosted the Leaders’ Roundtable on the theme ‘Climate-Health Nexus’, one of the 10 roundtables organised as part of the High-Level Meeting. In a bid to identify health-related initiatives and key commitments for the UN 2019 Climate Summit in New York and its Preparatory Meeting in Abu Dhabi, the roundtable followed a three-point agenda. Air pollution was the first area of focus, with participants discussing ways to scale up efforts to eliminate sources of greenhouse gas emissions that also contribute to non-communicable diseases. Climate disasters were examined at length as the second topic on the agenda, with the environment advocates outlining the urgent action needed to reduce and respond to the impacts of droughts, hurricanes, storms, and other climate events that result in displacement, humanitarian disasters, and destruction of health infrastructure. Deliberating on vector-borne diseases, the third area of focus on the agenda, participants proposed actions to anticipate and mitigate the spreading and changing patterns of diseases due to rising temperatures and other climatic influencers.

Joining the UAE minister at the roundtable were Werner Obermeyer, Deputy Executive Director of the World Health Organisation Office at the UN, Ellen Agler, CEO of the END Fund, the only private philanthropic initiative solely dedicated to ending the most common neglected tropical diseases, Petteri Taalas, Secretary-General of the World Meteorological Organisation, the specialised agency of the UN whose mandate covers weather, climate and water resources, and Dr Emanuele Capobianco, Director for Health and Care at International Federation of Red Cross and Red Crescent Societies.

As part of his roundtable address, Dr Al Zeyoudi said: ‘The health and climate nexus is a topic that resonates strongly in the UAE. As my country is hosting the global preparatory meeting for the UN 2019 Climate Summit, I am personally committed to ensuring that we raise awareness of this crucial nexus. The right to health is a key human right, as outlined in the preamble to the Paris Agreement. Climate change impacts all aspects of human health and well-being, including air quality, food security, access to clean water, and healthcare infrastructure.’

He added: ‘This is why in the UAE, we undertook an assessment of the climate risks to human health as part of the National Adaptation Program. The risks identified included heat stress resulting in reduced labour productivity, heat stroke, cardiovascular and respiratory diseases, and damage to health infrastructure and disruption of healthcare services due to extreme events. We are also continuing to systematically assess risks and identify mitigation and adaptation measures.’