Trump, Moon to meet in Washington in April: Seoul - GulfToday 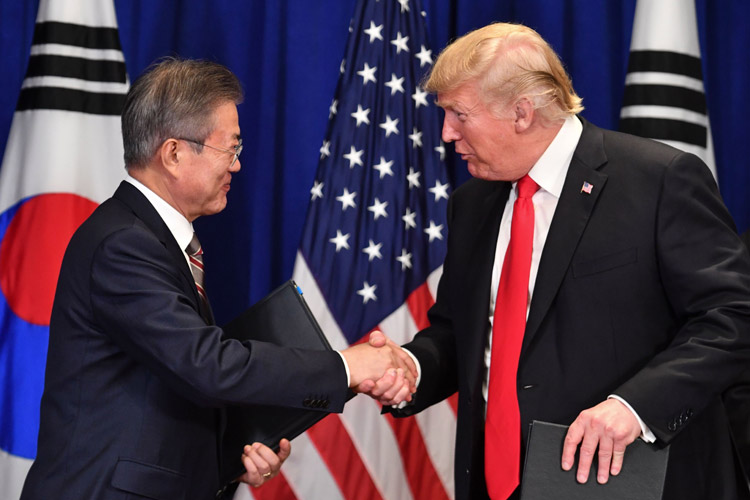 SEOUL: US President Donald Trump will host his South Korean counterpart Moon Jae-in next month, Seoul said on Friday, after the latest summit between Washington and Pyongyang ended in deadlock.

Moon has long backed a policy of engagement with nuclear-armed, sanctions-hit Pyongyang and was instrumental in brokering talks between Trump and North Korean leader Kim Jong Un.

But the failure of Kim and Trump to reach an agreement in Hanoi on curtailing Pyongyang’s nuclear programme in exchange for relaxation of sanctions has raised questions over the future of the process.

Moon will visit Washington on April 11, the South’s presidential Blue House said. Its spokesman had earlier told AFP it would be a two-day trip.

“The two leaders will have in-depth talks... to coordinate their stance on setting up a peace regime on the Korean peninsula through complete denuclearisation,” Yoon Do-han, the senior presidential press secretary said Friday.

The White House confirmed the visit and the planned talks on North Korea.

“The alliance between the United States and the Republic of Korea remains the linchpin of peace and security on the Korean Peninsula and in the region,” the White House press secretary said in a statement, using the official name of South Korea.

In Seoul, Moon has been under heavy criticism from the country’s right-wing politicians for his dovish approach following the no-deal outcome from Hanoi, with one lawmaker accusing him of acting as the “top spokesman” for Kim Jong Un.

Moon had been pushing for the resumption of South Korean tourism to the North’s Mount Kumgang and operations at the Kaesong Industrial Complex, where Southern firms used to be staffed by Northern workers.

But his plan to unveil details of such projects on March 1, right after the Hanoi summit, was scrapped as Kim and Trump failed to reach a deal.

In Washington, the Hanoi outcome paradoxically brought Trump praise within his Republican Party — some members had privately fretted he was too eager to seal a deal.

Pyongyang last week abruptly pulled its staff out of an inter-Korean liaison office, but the officials came back to the joint facility in the Northern city of Kaesong days later.

Their return came after Trump announced he had “ordered” the withdrawal of additional sanctions — without identifying the measures — against Pyongyang by the US Treasury.

Pakistan Foreign Minister Makhdoom Shah Mahmood Qureshi has reached Dubai on a 3-day official visit to the UAE on Saturday.

The Ministry of Community Development approved an exceptional programme with quality events targeting initiatives and influential programmes through social media during the Holy Month of Ramadan.