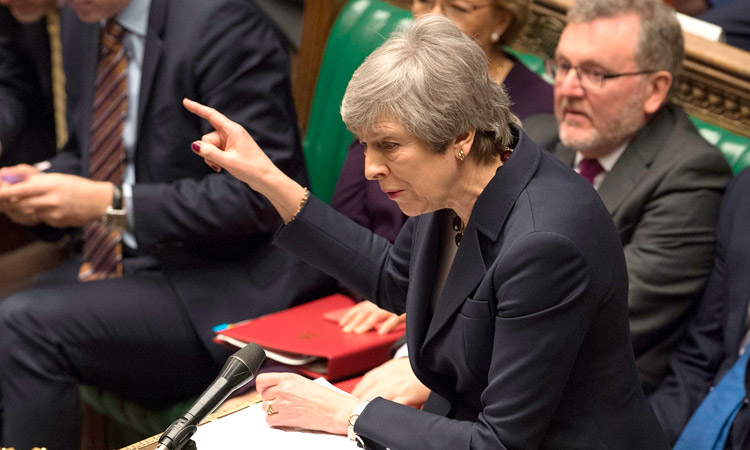 A released by the UK Parliament on Wednesday shows Britain's Prime Minister Theresa May speaking during the weekly Prime Minister's Questions (PMQs) question and answer session in the House of Commons in London. Mark Duffy / AFP

LONDON: British Prime Minister Theresa May will renew attempts to push through her Brexit plan, after she dramatically offered to quit to save her deal and MPs failed in their own bid to break the deadlock.

The offer came just hours before the House of Commons took part in an unprecedented series of votes to seek an alternative plan -- but all eight proposals failed to find a majority, highlighting divisions among MPs.

Brexit minister Steve Barclay said the outcome "strengthens our view that the deal our government has negotiated is the best option".

MPs have twice rejected May's Brexit deal, both times by large majorities, prompting the leader to announce what is expected to be her final offer. 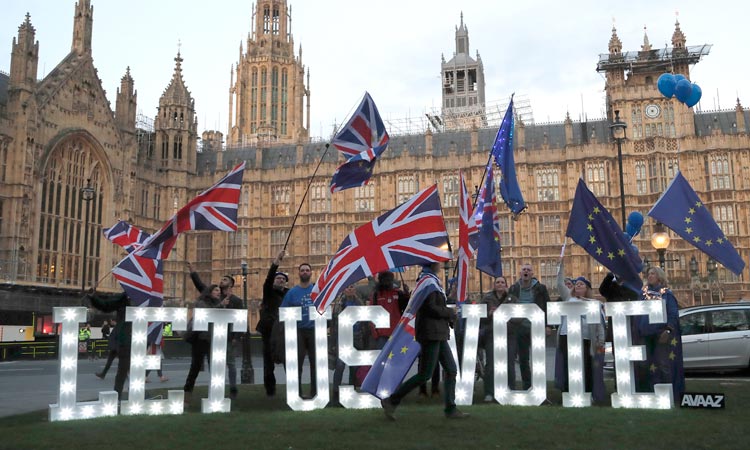 1.2 metre-tall illuminated letters declaring "LET US VOTE" are set up outside Parliament by the public and civic organisation Avaaz in London, on Wednesday.

"I know there is a desire for a new approach — and new leadership — in the second phase of the Brexit negotiations and I won't stand in the way of that," she told a packed meeting of her Conservative MPs.

"But we need to get the deal through and deliver Brexit. I am prepared to leave this job earlier than I intended in order to do what is right for our country and our party."

There are signs of softening among her rebel MPs, with a number of Eurosceptics performing a U-turn including former foreign secretary Boris Johnson -- a likely contender to replace May -- who told fellow MPs on Wednesday he would support the deal.

But her offer may not be enough to win round some hardliners, including a group of Conservatives reported to call themselves "The Spartans" who are still holding out -- as is the Democratic Unionist Party, the Northern Irish party which props up May's government.

The DUP says the "backstop" plan in the deal to keep open the border with EU member Ireland after Brexit poses an "unacceptable threat" to the United Kingdom's political union.

The opposition Labour and Scottish National parties are also against the deal.

'Back me and sack me'

Britain's Daily Mail newspaper questioned whether her "sacrifice" would be in vain while the Guardian called her resignation offer "a stitch-up for a bad deal".

The i newspaper summed up her offer with the headline "Back me and sack me," adding that she had ignited a Conservative Party leadership contest.

May agreed with the EU last week to delay Brexit amid fears Britain was heading for a potentially catastrophic "no deal" exit on Friday.

Downing Street has hopes of returning its deal to MPs for a third vote this week, but said it would only do this if it believed it would win.

If her deal is passed by MPs, Brexit will happen on May 22 -- but if not, she must return to Brussels before April 12 to explain what happens next.

Frustrated by May's refusal to change strategy, backbench MPs staged their own series of votes.

MPs were asked to vote yes or no to eight options but there was no majority for any of them.

A plan for a new customs union with the EU after Brexit came closest, defeated by a slim margin of 272 votes to 264, but May has repeatedly ruled out this option. 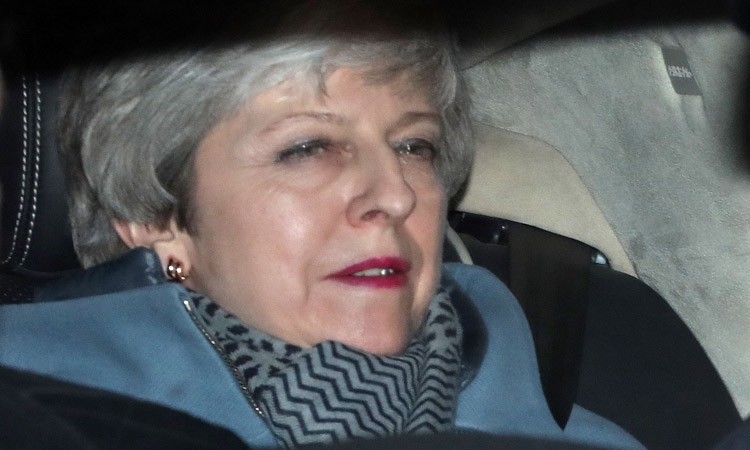 Britain's Prime Minister Theresa May leaves the Houses of Parliament in Westminster, in central London on Wednesday. Daniel Leal-Olivas/ AFP

A proposal to put May's deal, if agreed, to a "confirmatory" public vote also came close to passing, defeated by 295 to 268 votes -- a result that drew huge cheers in the Commons.

Time has now been set aside on Monday for MPs to try and whittle down the most popular options -- however, the motions are not binding on May.