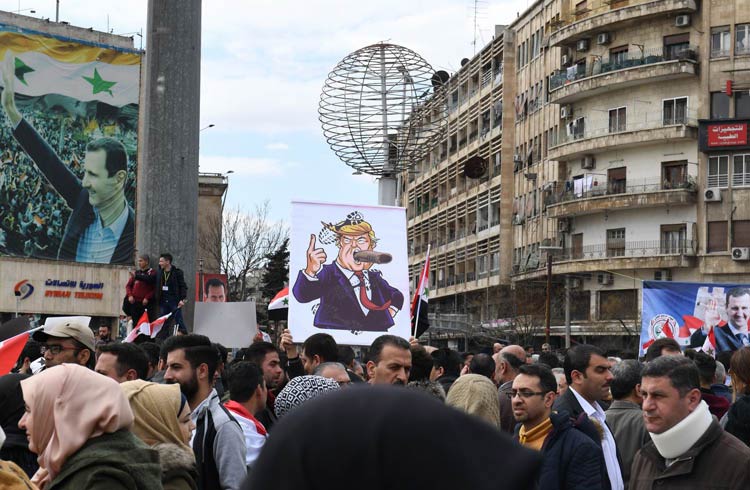 Syrians protest in the northern city of Aleppo against the US decision to recognise Israel’s sovereignty over the Golan Heights on Tuesday. File photo/AFP

DAMASCUS: The Syrian military said Israel on Wednesday night launched raids on an industrial zone in the northern city of Aleppo, causing damage only to materials, while opposition sources said the strikes hit Iranian ammunition stores and a military airport used by Tehran’s forces.

“The Israeli aggression targeted some positions in Sheikh Najjar industrial zone and a number of enemy missiles were brought down,” an army statement said. There was no immediate comment from Israel.

The blasts caused an electrical blackout in Aleppo, the country’s second largest city and a major industrial hub that bore the brunt of years of fighting and heavy Russian and Syrian aerial bombardment on its former rebel-held areas.

According to the Syrian Observatory for Human Rights war monitor, the strike hit an arms depot used by Iranian forces and killed seven people.

It would be the first attack in Syria since US President Donald Trump on Monday recognised the Golan Heights — seized from Syria in the Six-Day War of 1967 — as Israeli territory, a move which broke with decades of international consensus.

The United States was isolated at the United Nations Security Council on Wednesday over Trump’s decision to recognise Israel’s sovereignty over the Golan Heights as the other countries on the council opposed the move.

In a letter requesting Wednesday’s meeting, Syria described the US decision as a “flagrant violation” of council resolutions, while ally North Korea issued a statement backing “the struggle of the Syrian government and people for taking back the occupied Golan Heights.”

British UN Ambassador Karen Pierce told the council that the US decision was in contravention of that 1981 resolution, while Russia’s Deputy UN Ambassador Vladimir Safronkov said Washington had violated UN resolutions and warned it could fuel instability in the Middle East.

The European members of the council — France, Britain, Germany, Belgium and Poland — on Tuesday also raised concerns about “broader consequences of recognising illegal annexation and also about the broader regional consequences.”

Sana said the strike caused only material damage but the Britain-based Observatory, which relies on a network of sources inside Syria, said seven people were killed.

It said the victims were guards protecting the targeted warehouses, which were used as ammunition depots by Iranian forces and allied militia.

The Observatory added the seven dead were neither Syrian nor Iranian but could not specify their nationalities.

A number of residents of Aleppo told AFP that the attack led to a power cut in the whole city. Power was restored hours later.

Military experts say Aleppo is one of the main areas where Iran›s elite Revolutionary Guards have a strong military presence supporting local militias that have for years been fighting alongside the Syrian army to defeat insurgents.