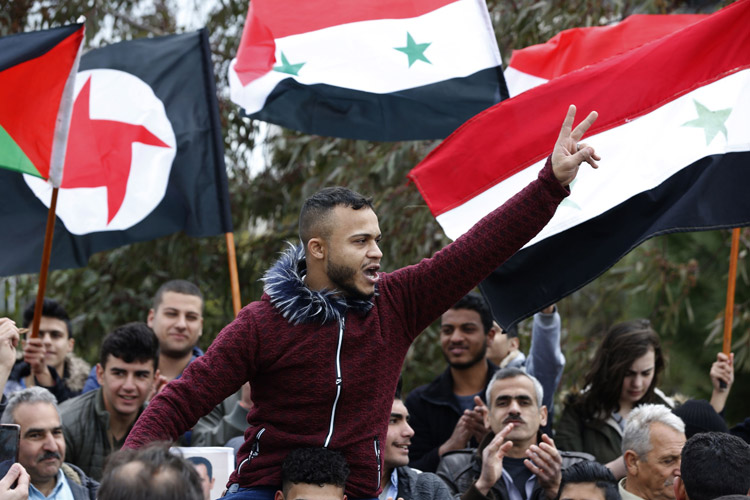 Syrians protest in the town of Quneitra in the Syrian Golan Heights against the US decision to recognise Israel's sovereignty over the Golan Heights. Louai Beshara / AFP

UNITED NATIONS: Syria asked the United Nations Security Council on Tuesday to hold an urgent meeting on the US decision to recognize the Golan Heights as Israeli territory.

President Donald Trump signed a proclamation on Monday in which the United States recognized Israel’s annexation of the strategic plateau, despite UN resolutions that call for Israel’s withdrawal from the Golan.

In a letter seen by AFP, the Syrian mission to the United Nations asked the council presidency, held by France, to schedule an urgent meeting to “discuss the situation in the occupied Syrian Golan and the recent flagrant violation of the relevant Security Council’s resolution by a permanent member-state.”

The French presidency did not immediately schedule the meeting and diplomats said there would be a discussion at the council about the request. 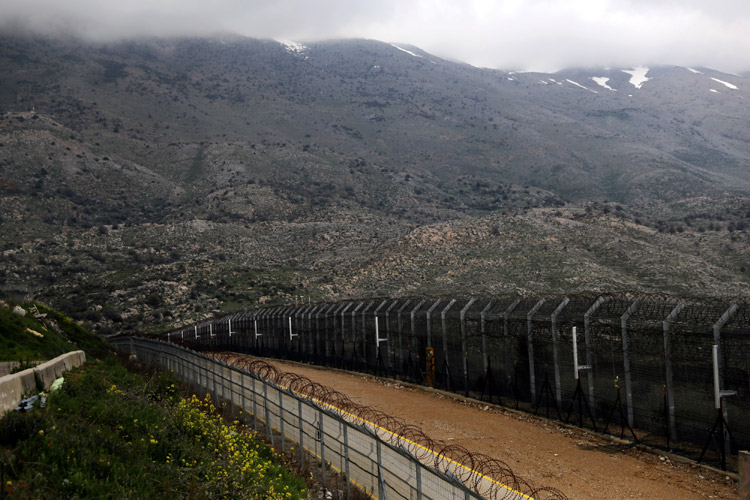 Fences are seen on the ceasefire line between Israel and Syria in the Israeli-occupied Golan Heights on Monday. Ammar Awad/ Reuters

On Friday, Syria wrote a separate letter urging the council to uphold resolutions demanding that Israel withdraw from the Golan.

The council is scheduled to discuss the latest crisis on Wednesday during a meeting on renewing the mandate of the UN peacekeeping force deployed between Israel and Syria in the Golan, known as UNDOF.

The head of the Lebanese Shiite movement Hezbollah, a key Syrian ally, called for resistance against the US decision.

Hezbollah chief Hassan Nasrallah said the only option left to Syrians to take back their land — and for Palestinians to achieve their “legitimate rights” — was “resistance, resistance, and resistance.”

He described Trump’s move as “a crucial turning point in the history of the Arab-Israeli conflict.”

“The only option left to Syrians to take back their land — and for Palestinians to achieve their “legitimate rights” — was “resistance, resistance, and resistance

Trump’s decision “deals a knockout punch to what is called the peace process in the region, which is built on (the concept of) land in exchange for peace,” he said in a televised address.

He called on the Arab League, which has suspended Syria’s membership over the bloody repression of protests leading to the war, to take action at a summit at the end of the month in Tunis.

Five European countries with seats on the council earlier rejected Trump’s decision and voiced concern that the US move would have broad consequences in the Middle East.

Syrians protest in the northern city of Aleppo against the US' decision to recognise Israel's sovereignty over the Golan Heights on Tuesday. George Ourfalian / AFP

A man drives an agricultural tractor in a vineyard in the Israeli-occupied Golan Heights on Tuesday. Ammar Awad/Reuters

Two of Washington’s closest allies — Britain and France — joined Belgium, Germany and Poland to declare that the European position had not changed and that the Golan remained Israeli-occupied Syrian territory, in line with international law enshrined in UN resolutions.

Three UN Security Council resolutions call on Israel to withdraw from the Golan, which it seized from Syria in the 1967 Six-Day War and annexed in 1981, in a move that was never recognised internationally.

US Acting Ambassador Jonathan Cohen told a council meeting on the Middle East that Washington had made the decision to stand up to Syrian President Bashar Al-Assad and Iran.

“To allow the Golan Heights to be controlled by the likes of the Syrian and Iranian regimes would turn a blind eye to the atrocities of the Assad regime and malign and destabilising presence of Iran in the region,” said Cohen.

There “can be no peace agreement that does not satisfactorily address Israel’s security needs in the Golan Heights,” he added.

China and Russia spoke out against the US decision during the council meeting, as did Indonesia and South Africa, two countries that strongly support the Palestinians, along with Kuwait, a US ally in the region.