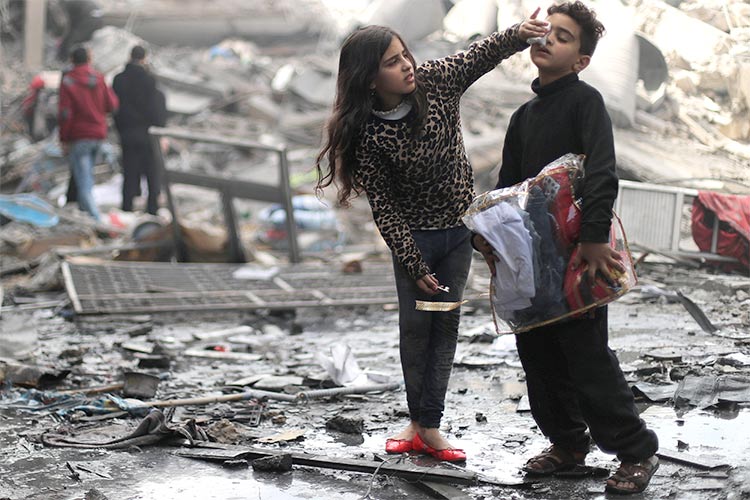 A Palestinian girl cleans the face of her brother outside their destroyed house after an Israeli missile targeted a nearby Hamas site in Gaza City on Tuesday. Reuters

UNITED NATIONS: The United Nations envoy for the Middle East warned on Tuesday of catastrophic consequences from escalating violence in Gaza as Israel and the Palestinian group Hamas continued to exchange fire despite a ceasefire deal.

Nickolay Mladenov told the Security Council that a “fragile calm” had returned to the region but that the situation remained “extremely tense” following reports that Hamas had agreed to a truce.

“I am concerned that we may once again be facing another very dangerous escalation of violence in Gaza with potentially catastrophic consequences,” Mladenov told a council meeting on the Middle East.

“The last two days have shown how precipitously close we came to the brink of war once again.”

Israel kept up air strikes on Gaza on Tuesday despite the ceasefire claim.

The United Nations is working with Egypt to ensure a the truce takes hold to avoid the outbreak of a fourth war in the Palestinian enclave.

Mladenov urged the council to condemn the “continued indiscriminate firing of rockets by Hamas towards Israel” and also to call on all sides to show restraint. Israeli Prime Minister Benjamin Netanyahu earlier told a US pro-Israel lobby group that he was ready to order further action in Gaza and “do what is necessary to defend our people and to defend our state.”

“A new conflict will be devastating for the Palestinian people. It will have consequences for Israelis, who live in the vicinity of the Gaza perimeter, and it is likely to have regional repercussions,” Mladenov warned.

The envoy also reported that Israel’s settlement expansion in the West Bank and East Jerusalem had continued despite a 2016 resolution demanding an end to the building of the Jewish outposts.

More than 3,000 units have been approved or tendered in the occupied West Bank — the largest batch of new settlements since May 2018, said Mladenov. Ealrier during the day, Cross-border fighting between Israel and Hamas abated after a day of Palestinian rocket attacks and Israeli air strikes but Israel said it reserved the right to strike again and kept its troops and tanks massed at the Gaza frontier.

The biggest Israeli-Palestinian escalation in months, which began on Monday with the longest-range Palestinian rocket attack to cause casualties in Israel for five years, appeared to have been curbed overnight by Egyptian mediation.

But even if brought to an end, the crisis could have an impact on an Israeli election in two weeks in which right-wing Netanyahu says he must stay in power to keep Israelis safe.

The border fell quiet on Tuesday morning after Hamas and the Islamic Jihad group, which also took part in the fighting, said Egypt had brokered a truce.

As in past escalations that ended with Egyptian mediation, Israel denied it had agreed to a ceasefire with Hamas, which it views as a terrorist group.

“Netanyahu is trying to portray himself as a hero to his people, therefore he publicly denies the understanding reached with the Egyptians,” Islamic Jihad official Khader Habib said. “Resistance factions are committed to calm as long as the enemy abides by it.” Rocket warning sirens, which had sounded in Israeli towns near the border on Monday night, fell silent by morning.

Meanwhile a peace process aimed at ending the Israel-Palestinian conflict based on a two-state solution has all but collapsed. In the morning, with the bombing having stopped, Gazans picked through the rubble of destroyed buildings to search for valuables and documents. Some Gaza universities were shut but schools were open, although many families kept children home.

“We don’t want war, but if Israel wants it then what should we do? We ask our factions to respond,” said Mohammad Sayed, 40. “But we hope Egypt reaches a deal to end this.”

Officials at a Palestinian university in the West Bank say undercover Israeli forces have raided the campus and arrested three students.

Lubna Abdelhadi, a spokeswoman for the Bir Zeit University, says the armed commandos, disguised as locals, entered the campus early on Tuesday and grabbed the students, believed to be Hamas activists, while they were sleeping.

The students were apparently hiding on campus to try and avoid arrest. The raid happened as Israel and Hamas traded fire overnight after a rocket attack from Gaza struck a home in central Israel early on Monday.