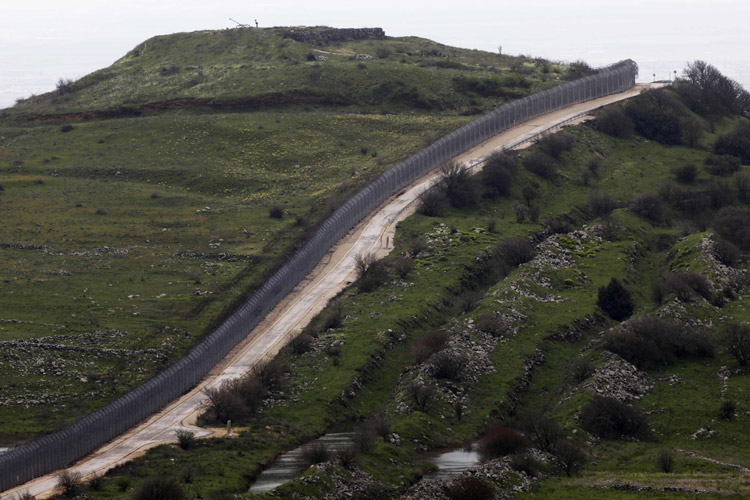 A picture taken from the Israeli-annexed Golan Heights shows a view of fence separating the annexed territory from Syria. Menahem Kahana / AFP

ABU DHABI / RIYADH: The United Arab Emirates and Saudi Arabia have expressed their deep regret and condemnation of the recognition by the United States of the Syrian Golan Heights as sovereign Israeli territory, describing it as a move that disrupts all efforts to achieve a lasting peace in the Middle East.

In a statement issued on Tuesday, the UAE Ministry of Foreign Affairs and International Cooperation, MoFAIC, stressed that there is no possibility of achieving stability and peace in the region as long as Israel continues its occupation of Palestinian and other Arab territories.

The Ministry's statement affirmed the UAE's firm position in recognising the Golan Heights as Syrain territory, adding that the decision by the US Administration cannot change this reality.

The MoFAIC statement reaffirmed the necessity of abiding by UN Security Council resolutions No. 242 of 1967 and 497 of 1981 and the principles set out in the Arab Peace Initiative concerning a full Israeli withdrawal from occupied Arab territories, including the Syrain Golan Heights.

“Attempts to impose fait accompli do not change the facts,” the statement said. It said the Golan Heights was an “occupied Syrian Arab land in accordance with the relevant international resolutions.”

“It will have significant negative effects on the peace process in the Middle East and the security and stability of the region,” it said.

Trump, with visiting Israeli Prime Minister Benjamin Netanyahu looking over his shoulder during a visit to Washington, signed a proclamation on Monday officially granting US recognition of the Golan Heights as Israeli territory.

Israel seized the Golan Heights from Syria in the 1967 Middle East War and annexed it in 1981 in a move not recognised internationally.

The Saudi Press Agency report described Monday’s declaration as a clear violation of the United Nations Charter and of international law.