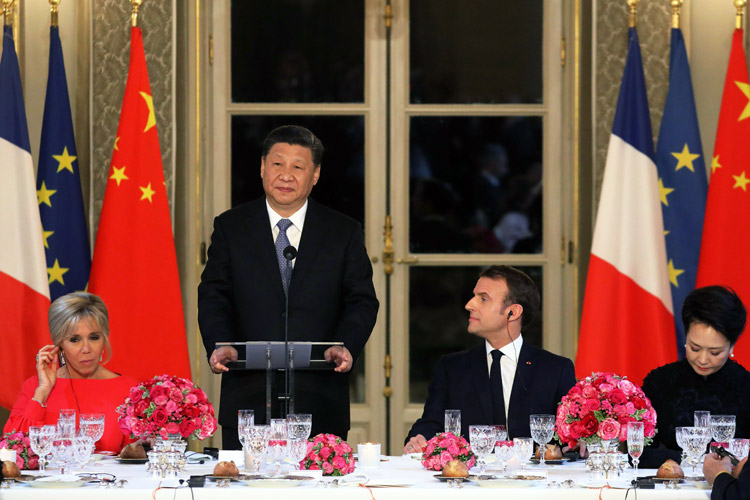 The Chinese president is on a three-day state visit to France where he is expected to sign a series of bilateral and economic deals on energy, the food industry, transport and other sectors. Ludovic Marin / AFP

PARIS: The leaders of China, France, Germany and the EU were set to meet in Paris on Tuesday for “unprecedented” talks on how to improve ties, despite growing jitters over Beijing’s massive investments in Europe.

It comes ahead of an EU-China summit in Brussels next month and a day after Chinese President Xi Jinping signed an array of deals with France including a huge aircraft contract.

At a glitzy state dinner on Monday evening French President Emmanuel Macron said he hoped to build a “new global governance” with China and would discuss this at the “unprecedented meeting with the German chancellor and the president of the European Commission.”

“This is an important gesture that we are making now. It is testament to your deep attachment to China’s cooperation with Europe... and my desire to build a strong Europe,” he told Xi.

German Chancellor Angela Merkel and EU Commission chief Jean-Claude Juncker will join Xi and Macron at the Elysee Palace to explore “points of convergence” between the two trading giants.

On Monday China and France inked a dozen deals on nuclear power, cultural exchanges and clean energy, while Beijing also committed to buy 290 Airbus A320s and 10 A350 airliners from Europe’s Airbus conglomerate.

The order, originally for 184 A320s for 13 Chinese airlines, was first announced during Macron’s state visit to China in January 2018.

All of the deals, including one on French exports to China of frozen chicken, amount to a total of some $40 billion.

Xi’s visit poses a particular challenge for Macron, who wants to deepen EU ties with China while pushing back against Beijing’s growing global clout.

Speaking at the Elysee Palace on Monday following talks with Xi, Macron called for a “strong Europe-China partnership,” adding that this must be based on “strong multilateralism” and “fair and balanced” trade.

Meanwhile Xi stressed that “a united and prosperous Europe fits in with our vision of a multipolar world.”

“China will always back European integration and its development,” he added in a statement to the press.

Earlier on his trip, Xi visited Italy, which became the first G7 state to sign up to China’s vast “New Silk Road” infrastructure project that has sparked unease in the US and the European Union.

Macron announced that France and China will cooperate on a number of investment projects in some of the countries involved in the initiative, a massive undertaking to link Asia to Europe.

Italy’s participation comes despite misgivings over the huge venture by other European nations wary of China’s growing influence.

Xi has insisted the project will be a two-way street of investment and trade.

But EU Budget Commissioner Gunther Oettinger in a newspaper interview over the weekend expressed “concern that in Italy and other European countries, infrastructure of strategic importance like power networks, high speed rail lines or harbours are no longer in European but in Chinese hands.”

Europe’s distrust of Chinese telecom giant Huawei, which is poised to become the dominant player in next-generation 5G mobile technology worldwide, is also emblematic of the increasingly rocky relationship.

The US is pressuring European allies not to use Huawei technology, saying it creates a security risk by potentially letting Beijing snoop on sensitive communications.

France has so far not ruled out using Huawei technology.

As well as addressing commercial cooperation and strategic issues with Xi, Macron has also been urged to deal with the case of Meng Hongwei, the Chinese former head of the France-based Interpol police agency.

Meng’s wife has had no news of her husband since his arrest in China nearly six months ago. It emerged Sunday she had written to Macron asking him to bring up his disappearance with Xi.

Meng is believed to be facing corruption charges.

Despite the many sources of friction, France wants to engage China as a closer partner as Washington becomes more isolationist under Trump’s “America First” policy.