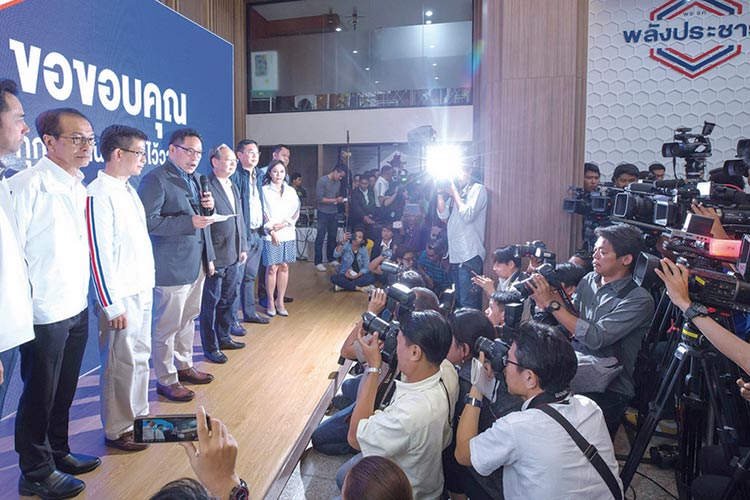 Uttama Savanayana (centre) with a microphone in his hand speaks during a press conference in Bangkok, Thailand, on Monday. Associated Press

Junta leader Prayut Chan-O-Cha, an arch foe of ousted billionaire tycoon Thaksin, appears poised for victory after his army-linked party made a strong showing in Sunday’s poll, aided by a new constitution that gives him a head start.

Election officials delayed without explanation a full announcement of preliminary results as a blizzard of complaints mount over apparent mistakes in the count and possible irregularities.

Now Thaksin has broken a months-long silence to add his voice to the mix, accusing the military of stacking the deck ahead of the vote and using dirty tricks at the ballot box.

“Everyone knows in Thailand, everyone international that observed the election in Thailand, knows that (there) is irregularities,” he told AFP in English. “What we call, we should call, rigged elections is there. It’s not good for Thailand.” Thaksin was speaking to AFP on Monday afternoon from a luxury hotel in Hong Kong where he watched as results came in from a homeland he has not set foot in for more than a decade.

The 69-year-old tycoon was ousted in a 2006 coup and has since chosen self-exile in Dubai.

But he has remained a crucial component of Thailand’s decade-long treadmill of protests and coups — a populist loved by his largely rural poor base and loathed by a royalist military elite and their wealthy Bangkok allies.

Parties linked to his family have won every election since 2001, only to find themselves toppled by coups, street protests and court rulings.

Thaksin’s sister Yingluck was herself ousted in a 2014 putsch, and is also living in self-exile.

Sunday’s election was seen as a referendum on the military’s five-year rule but was held under new rules written by the junta to ease its transformation into a civilian government.

The next prime minister needs to win a simple majority in the 500-seat lower house and a 250-seat senate. But the latter will be entirely appointed by the junta, giving Prayut, who is standing, a huge leg up.

Partial figures released late Monday showed the Thaksin-linked Pheu Thai party had earned 137 of the 350 available constituency seats so far, not enough to take on Prayut’s Palang Pracharat party which so far has 97 seats but can rely on the senate.

Prayut’s party also racked up 7.6 million votes with more than 90 per cent of votes tallied, nearly half a million more than Pheu Thai. Full results and seat numbers might take weeks to be released.

Thaksin said the electoral handicap would do little to legitimise Thailand internationally or appease voters.

“Any game, if the rule and the referee is not fair, the result will not be respected,” he said.

Asked whether he thought the vote was rigged he replied: “Definitely”.

When pushed for evidence he listed reports of suspiciously high ballots cast for the military in key provinces and the some 1.9 million ballots invalidated so far.

“Also why the void ballots are so high? So high, many irregularities happen”.

The lavish celebration at a newly opened hotel on the Victoria Harbour was attended by a bevy of Thai political and business figures, illustrating the family’s continued pull.

Among those present was Yingluck and Princess Ubolratana, who briefly caused a shockwave ahead of the elections when she was announced as a candidate to lead a Thaksin-linked party.

King Maha Vajiralongkorn stopped the nomination, and a court later dissolved the party that proposed Ubolratana — dealing a major blow to the pro-Thaksin electoral machinery.

Thaksin’s aides said he would not answer questions on the royal family, citing the kingdom’s lese majeste laws.

Asked whether he thought he would see Thailand again he replied: “I don’t care. But I still love my country, love my people.” He insisted he no longer controls the parties linked to him.