UAE delegation participates in UN Commission on Status of Women 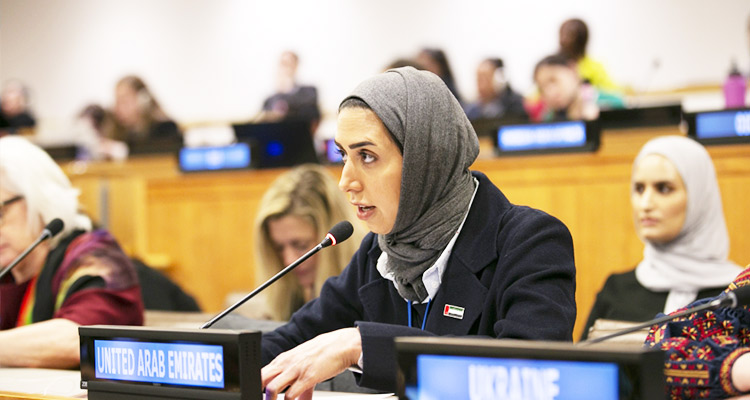 The UAE’s delegation was led by Hessa Tahlak, Assistant Under-Secretary of the Ministry of Community Development. Photo: WAM

NEW YORK: A UAE delegation participated in the 63rd session of the Commission of Status of Women, CSW, at the UN, which concluded on Friday. The session focused on social protection systems, access to public services, and sustainable infrastructure for gender equality and the empowerment of women and girls.


The UAE’s delegation was led by Hessa Tahlak, Assistant Under-Secretary of the Ministry of Community Development, who emphasised that while progress has been made around the world, there is more work to be done.

"Despite the progress, we have achieved in advancing gender equality and empowering women and girls, we need to consolidate and accelerate our efforts as we aim to take the ambitious Sustainable Development Goals to its finishing line in 2030," Tahlak noted.

She added, "Without providing women and girls access to the social protection systems and public services, they cannot achieve full participation in society. And without the empowerment of women and girls, we will not be able to achieve global sustainable development. With the advent of the fourth industrial revolution, we in the UAE believe that we must harness technology to improve social protection systems and access to public services and sustainable infrastructure that benefits everyone."

During the general discussion of the Commission, Tahlak delivered the national statement which outlined the UAE’s advances on gender equality and women’s empowerment. She also lauded Emirati leaders who believed in the critical role and inclusion of women in all of society.

"Our Founding Father, His Highness Sheikh Zayed Bin Sultan Al Nahyan left us a rich legacy that provides the vision to continue building a prosperous and tolerant society based on the principle of empowering women and girls. This vision is also supported by H.H. Sheikha Fatima Bint Mubarak, Chairwoman of the General Women's Union, President of the Supreme Council for Motherhood and Childhood, and Supreme Chairwoman of the Family Development Foundation, who leads the national efforts to empower women."

On the side-lines of the session, the UAE also co-hosted a discussion on amplifying the role of women in post-conflict reconstruction with the Georgetown Institute of Women, Peace, and Security, the UN Peacebuilding Support Office and Department of Political and Peacebuilding Affairs, and UN Women.

During the discussion, Tahlak underlined the crucial link between regional and global women's empowerment strategies in the area of peace and security and highlighted the UAE’s efforts to advance women, peace, and security agenda in the Arab region - including the new Military and Peacekeeping Training programme with UN Women.

Also, the UAE participated in an event with fellow members of the Organisation of Islamic Cooperation, OIC, on national efforts to advance gender equality and empower women and girls. She outlined the UAE’s initiatives and programmes aimed at empowering women - both within its borders and globally.

Tahlak also noted that the UAE would work together with OIC member states and partners to realising gender equality and women’s empowerment.

On the side-lines of the session, the UAE delegation attended the Kingdom of Saudi Arabia’s voluntary presentation on women’s empowerment and the link to sustainable development and commended the Kingdom for the proactive and positive steps it has taken on this subject, including Vision 2030.