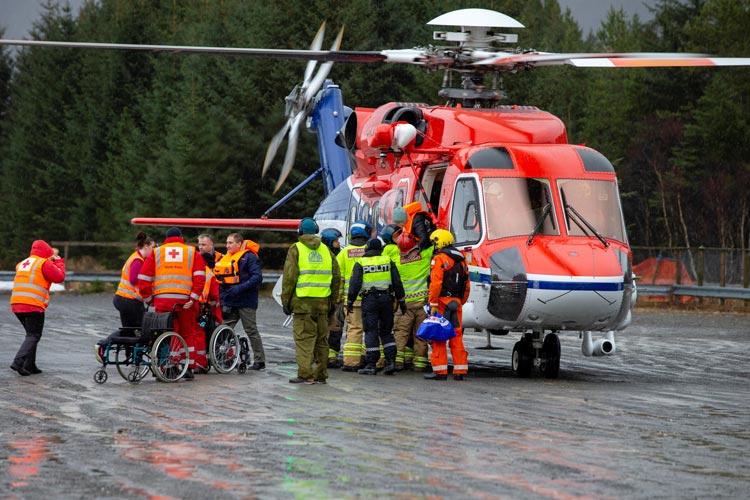 Passengers are helped out of a rescue helicopter after being rescued from cruise ship Viking Sky in Hustadvika, Norway, on Sunday. Reuters

OSLO: A cruise liner that ran into trouble in rough seas off Norway was being towed to port on Sunday after hundreds of passengers were helicoptered to safety.

The authorities launched an airlift in very difficult conditions rather than run the risk of leaving people on board.

"We would rather have the passengers on land rather than on board the ship," police chief Tor Andre Franck said.

By Sunday, the crew had managed to restart three of its four engines and two tugs arrived.

Authorities said 460 of the 1,373 people on board had been taken off by five helicopters before the airlift was halted to allow the towing to start.

Police said 17 people had been taken to hospital, one in their 90s and two 70-year-olds suffered serious fractures.

"The evacuation has been put on pause for now", a spokesman for southern Norway's rescue centre told the media. 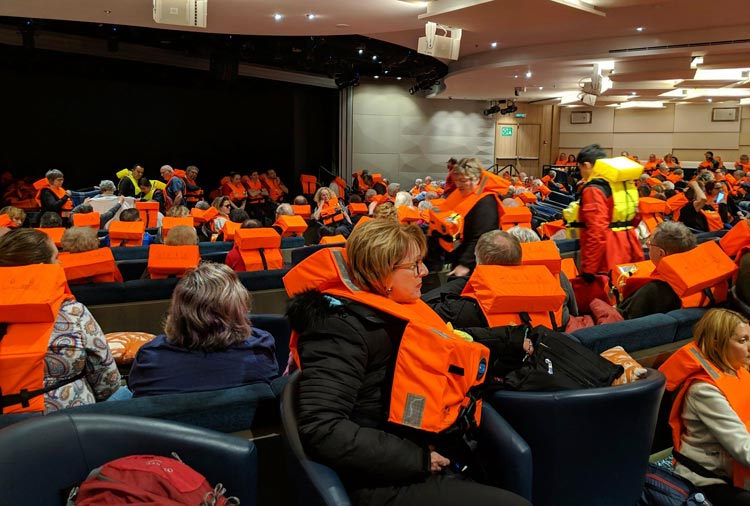 This photo shows passengers on board the Viking Sky, waiting to be evacuated, off the coast of Norway on Saturday.

"The captain will weigh up the situation" before deciding if the airlift resumes, he added.

The vessel was heading for the port of Molde, with 60 kilometres (45 miles) still to go, and about 500 kilometres northwest of Oslo, officials said.

Dramatic footage of the passengers' ordeal showed furniture and plants sliding round the lurching vessel as parts of the ceiling came down.

Dozens of passengers wearing life jackets were seated around waiting to get off the vessel.

"I have never seen anything so frightening," said Janet Jacob, who was rescued.

"I started to pray. I prayed for the safety of everyone on board," she told the NRK television channel.

"The helicopter trip was terrifying. The winds were like a tornado," she added.

"We were sitting down for breakfast when things started to shake... It was just chaos," said another passenger, American John Curry, as quoted in Norwegian by media.

Passenger Rodney Horgen said he had been reminded of the Titanic.

"I was standing, my wife was sitting in front of me and all of a sudden, she was gone. And I thought this was the end"

But it all ended well for Ryan Flynn. "Here's my 83-year-old dad being airlifted from the #vikingsky," he said.

"We are all off the ship safely!"

The Viking Sky sent out a distress signal due to "engine problems in bad weather", the rescue centre tweeted earlier.

The ship was sailing south from Tromso to Stavanger when engine trouble struck in an area that has claimed many vessels.

"We would rather have the passengers on land rather than on board the ship.

"It is dangerous to encounter engine problems in these waters, which hide numerous reefs," said Tor Andre Franck, the head of police operations.

A reception centre was set up in a gym on shore to accommodate the evacuees, many of whom are elderly and from the US and Britain.

"For the moment everything appears to be going well," said a rescue centre spokesman, Einar Knutsen.

The area where the ship got into problems, known as Hustadvika, is notoriously difficult to navigate.

The shallow, 10 nautical mile section of coastline is dotted with small islands and reefs.

"Hustadvika is one of the most notorious maritime areas that we have," Odd Roar Lange, a journalist specialising in tourism, told NRK.

In their time, the Vikings hesitated to venture into the Hustadvika, preferring instead to transport their boats by land from one fjord to another.

Operated by the Norwegian firm Viking Ocean Cruises, the Viking Sky was launched in 2017 with a capacity of 930 passengers plus crew.

In addition to US and British nationals, there were also passengers from 14 other countries on board, Fjeld said.