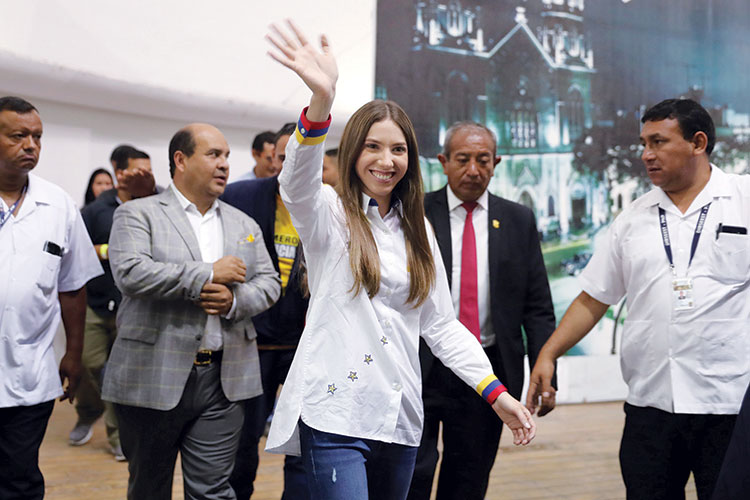 Fabiana Rosales participates in a rally with Venezuelans living in Peru. Reuters

LIMA: The wife of Venezuelan opposition leader Juan Guaido had a brief message for President Nicolas Maduro on Saturday, following the arrest of her husband’s chief of staff this week: “Enough already.” In an interview with Reuters in Peru, where she met with Venezuelan immigrants before a trip to the United States, Fabiana Rosales said the arrest of Roberto Marrero on terrorism accusations on Thursday was a “farcical” attempt by Maduro to break the opposition’s morale.

“We know what we’re up against. We know what kind of monster this dictatorship is,” said Rosales, a 26-year-old journalist and opposition activist who is considered Venezuela’s first lady by supporters.

Venezuela plunged into a deep political crisis in January, when Guaido invoked the constitution to assume an interim presidency, arguing Maduro’s 2018 re-election was illegitimate. He has been recognized by most Latin American and Western countries as Venezuela’s rightful leader.

But Maduro retains control of state functions and the loyalty of the military top brass. A socialist, Maduro says Guaido is a puppet of the United States and is attempting to lead a coup against him to wrest control of the OPEC nation’s oil reserves, the largest in the world.

Asked if she had a message for Maduro, Rosales said “enough already.” Rosales said spies and pro-government armed groups known as “collectives” have long followed her and her husband, monitoring their movements and stalking their family members and friends. “I and my family members have received threats of being thrown in jail or killed.” “But there’s something they’ve underestimated, and that’s that our ideals in this struggle won’t be broken,” she said. “If they thought they can break our morale by arresting Roberto Marrero, or that they could break him, they’re very mistaken.” Venezuela’s foreign ministry did not answer phone calls seeking comment outside regular working hours on Saturday. Venezuelan authorities have accused Marrero of planning attacks against political figures, and said an arms cache had been seized from his house.

Guaido, 35, told Reuters in an interview on Friday that he was prepared for more people in his team to be arrested, but thought Maduro’s government had reached its final stage.

Rosales said she thought Maduro was too fearful to have Guaido himself arrested.