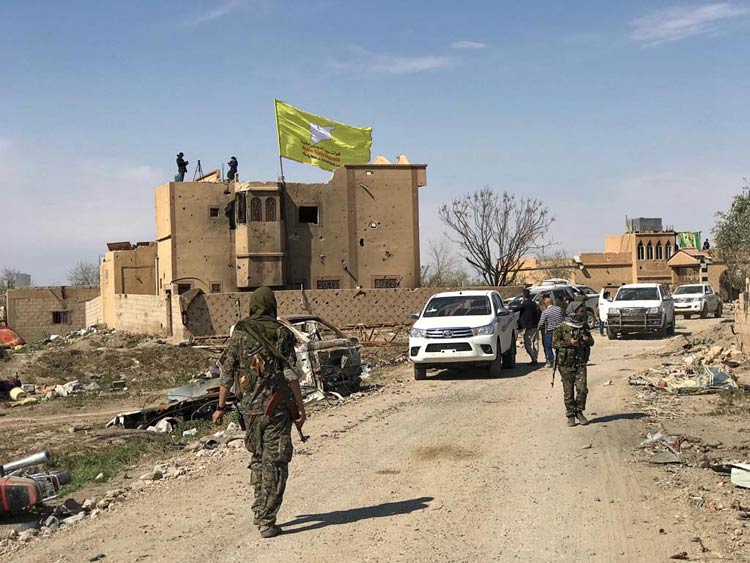 The SDF's victory capped a painstaking six-month operation and will go down as a symbolic date in a war that changed the face of the region and spurred a spate of global terror attacks. 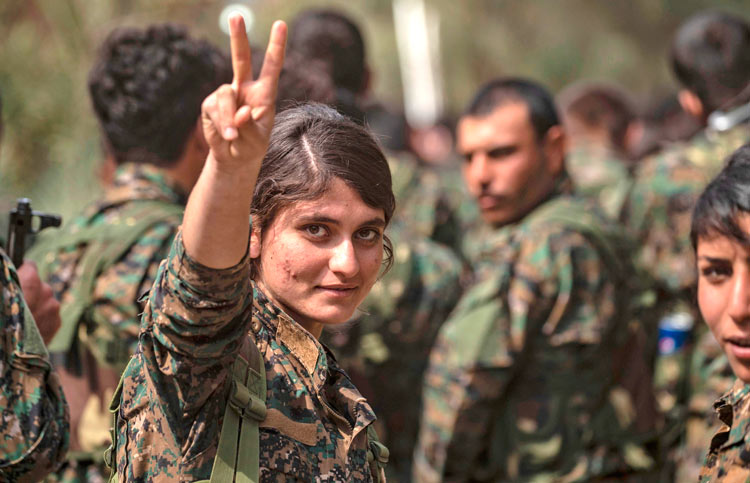 A female fighter of the Syrian Democratic Forces (SDF) flashes the victory gesture while celebrating near the Omar oil field in the eastern Syrian Deir Ezzor province on Saturday. Delil Souleiman / AFP

The state proclaimed in mid-2014 by fugitive Daesh supremo Abu Bakr al-Baghdadi started collapsing in 2017 when parallel offensives in Iraq and Syria wrested back its main hubs of Raqa and Mosul.

The nearly five years of fighting against the most brutal militant group in modern history left thousand-year-old cities in ruins and populations homeless.

The territory administered by the remnants of Daesh continued to shrink month after month and in September 2018 the SDF launched a final offensive on the last dregs of the "caliphate" in its Euphrates Valley strongholds.

Kurdish officers and aid groups were flummoxed by the number of people who had remained holed up in the last Daesh redoubt of Baghouz, a small village even few Syrians had ever heard of until this year.

As SDF forces pummelled Daesh positions and US warplanes dropped huge payloads on the riverside village, tens of thousands of people fled over a rocky hill and trudged through the plains in biblical scenes.

For weeks, the ghostly figures of the caliphate's last denizens hobbled out of the besieged village, famished, often wounded but sometimes still defiantly proclaiming their support for Daesh.

The Kurdish-led force and foreign intelligence screened more than 60,000 people since January, around 10 per cent of them militants turning themselves in.

This file image made from video posted on a militant website July 5, 2014, purports to show the leader of the Islamic State group, Abu Bakr Al Baghdadi, delivering a sermon at a mosque in Iraq during his first public appearance.

This undated photo released on Aug. 25, 2015, file photo, on a social media site used by Daesh militants shows smoke from the detonation of the 2,000-year-old temple of Baalshamin in Syria's ancient caravan city of Palmyra.

In this file frame grab from video posted online on Jan. 18, 2019, by supporters of the Daesh group, purports to show a gun-mounted Daesh group vehicle firing at members of the US-backed Syrian Democratic Forces, in the eastern Syrian province of Deir El Zour, Syria.

In this file photo taken on October 29, 2016 Iraqi families who were displaced by the ongoing operation by Iraqi forces against militants of the Daesh group to retake the city of Mosul, are seen near Qayyarah, south of Mosul. Bulent Kilic / AFP

US-backed Syrian Democratic Forces fighters prepare to fire a mortar shell against the Daesh militants, at one of the front lines, in Raqqa, northeast Syria. File photo

Most of the people evacuated from the smouldering ruins of Baghouz in recent days were relatives of Daesh members who now fill overcrowded camps further north in Syria's Kurdish-controlled region.

The biggest of them, Al-Hol, is now struggling to host 74,000 people, including at least 25,000 school-aged children.

Among them are thousands of foreigners from France, Russia, Belgium and 40-plus countries that are in most cases unwilling to take them back.

"The needs are huge and the camp is overwhelmed," Peter Maurer, president of the International Committee of the Red Cross said Friday upon returning from a five-day visit to Syria.

"The needs are huge and the camp is overwhelmed

Share
Peter Maurer, president of the International Committee of the Red Cross

While the SDF taking Baghouz marks the end of the Daesh "caliphate", the militants  still retain a presence in eastern Syria's vast Badia desert.

They also have hideouts in parts of Iraq as well as sleeper cells capable of carrying out the kind of deadly guerrilla insurgency that accompanied the rise of the Daesh group.

Daesh fighters who escaped the shrinking rump of the "caliphate" in time and reorganised their group are already re-establishing their former sanctuaries in Iraq, the Institute for the Study of War said.

Even the Pentagon has warned in a recent report that the absence of sustained counterterrorism pressure on Daesh would allow the militants  to reclaim some territorial control within months.