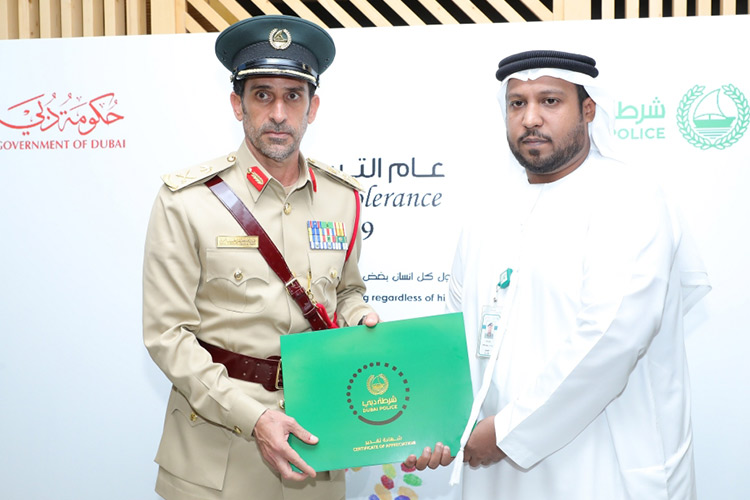 Police Corporal Mohammed Abdullah Mohammed Bilal was promoted a step above to the rank of Police Sergeant. Mar. Gen. Al Marri awarded him an in-kind gift and a certificate of appreciation for his good conduct.

DUBAI: A policeman who rejected a Dhs30 000 offer plus Dhs50,000 monthly bribes from a bootlegger was applauded by the Dubai Police boss, police said on Saturday.
The Dubai Police Commander-in-Chief Major General Abdullah Khalifa Al Marri honoured and promoted the policeman in recognition of his integrity and dedication to his work under the Criminal Investigations Department.

Police Corporal Mohammed Abdullah Mohammed Bilal was promoted a step above to the rank of Police Sergeant. Maj. Gen. Al Marri awarded him an in-kind gift and a certificate of appreciation for his good conduct.

“His honesty, integrity and dedication reflected the honourable image of a policeman from the United Arab Emirates,” said Al Marri. “The dedicated officer performed duties in a manner reflecting good qualities of police.

“He rejected Dhs30,000 as a down payment for the first month and also rejected a sum worth Dhs50, 000 he was supposed to receive every month besides a car gift in exchange for condoning bootlegging activities.” Maj. Gen. Al Marri explained that a man who represented a gang leader whose activities spanned Muhaisna area wanted to lure the policeman into abandoning to arrest or pursue alcohol hawkers in the area.

For his part, the promoted Emirati corporal, 32, expressed thanks and gratitude to Major General Abdullah Khalifa Al Marri for promoting him and appreciating his conduct, which boosted his faith in devotion to work “The promotion serves as a badge of honour on my chest and an incentive for me and all my colleagues to exert more effort, dedication and sincerity to work,” the corporal stressed while expressing his delight.

On the record, an Asian accountant (on behalf a bootlegging gang leader) befriend the corporal working for the Dubai Police CID’s anti-bootlegging section and offered to give him Dhs30, 000 for the first month.

The offer was meant to convince him to avoid conducting raids in Al Muhaisna (Sonapur) and keep alerting him about looming police operations. The corporal lured him into a trap at a parking lot in Nahdah on Jan.21.

The corporal revealed that the defendant contacted him asking him to cooperate in exchange for cash. “He asked me to accept the money and not enter Sonapur. And that I should alert him about coming raids.

“I told him to give me time to think about it. I notified my senior (a captain) who advised me to lure him into trap. He first offered Dhs15,000. He then said he would pay Dhs30,000 and promised to pay Dhs50,000 each month as long as I cooperated.”