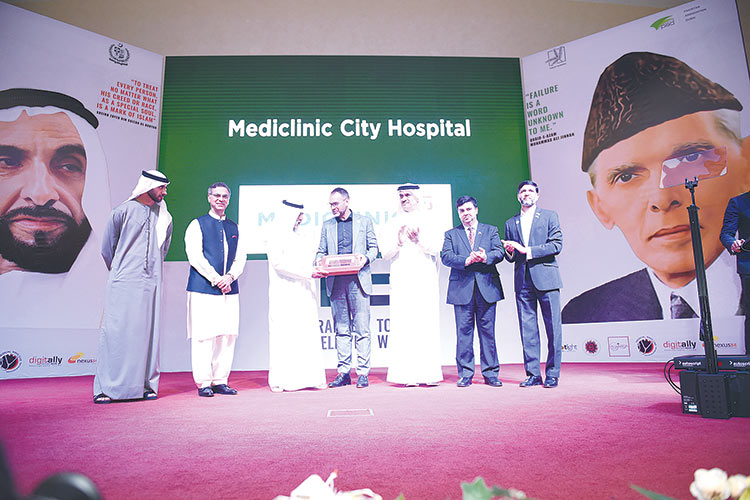 Dignitaries at the event, which was attended by over 300 guests from the Pakistani community.

DUBAI: A large number of community members of Pakistan residing in Dubai and other Emirates have attended the opening of the 3-day Pakistan Day activities that coincide with the ‘Year of Tolerance’ even as the upcoming medical centre project for the community was presented as a unique example of tolerance in the country.

The chief guest at the evening was Sheikh Nahyan Bin Mubarak Al Nahyan, UAE’s Federal Minister of Tolerance, besides a number of senior officials from the Dubai Government and diplomats. The evening was attended by over 300 guests from different segments of the Pakistani community held at the Pakistan Association Dubai (PAD). The event celebrated Pakistan Day to strengthen the UAE’s resolve in the Year of Tolerance.

The healthcare facility, Pakistan Medical Centre, will be open to the public in August this year and is the first of its kind in the GCC by any expatriate community. The facility will be open for all nationalities and serve people of all backgrounds and contribute to the Emirates’ vision of tolerance and social cohesion.

Addressing the occasion Sheikh Nahyan Bin Mubarak Al Nahyan said, “In combining your celebration of Pakistan’s National Day with our celebrations of the Year of Tolerance in the UAE, you are, in fact, celebrating the values and principles that unite the people of Pakistan and the United Arab Emirates.”

Applauding the upcoming non-profit Pakistan Medical Centre, he added, “The spirit of tolerance that will be at the heart of its operations is commendable as it will welcome people seeking medical help irrespective of their nationality, ethnicity, religious or philosophical beliefs, gender, political views, economic status, or age.”

Ahmad Julfar, Director General of Community Development Authority, parent body of PAD said, “Launching this healthcare facility comes as an honourable example of tolerance; it presents the social cohesion in a very nice way and shows the power of people in creating happiness for others and changing their lives for the better.”  Julfar said that CDA works closely with the social clubs and associations like Pakistan Association to reinforce their role in Dubai community and to allow them to play the vital role expected from them to support the social development that they will always be part of.