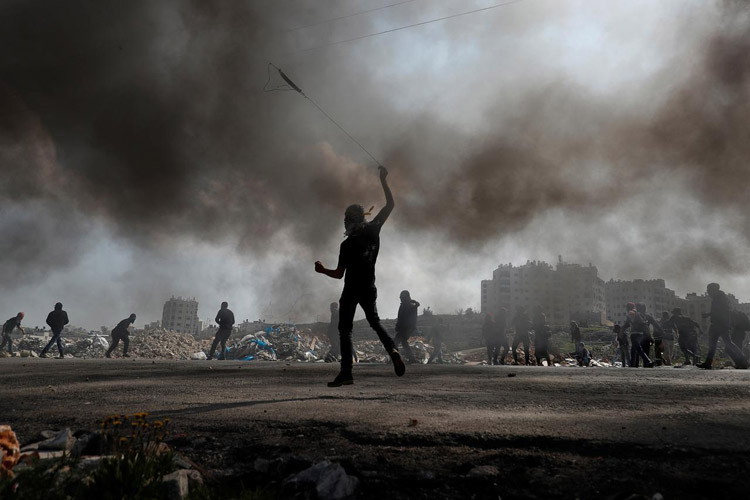 Palestinian protesters near the Jewish settlement of Beit El, in the Israeli-occupied West Bank on Wednesday. Mohamad Torokman/ Reuters

The Palestinian Red Crescent said one of its crews treated a man with two bullet wounds at an Israeli military roadblock near the city of Bethlehem on Wednesday and that Israeli forces had shot him.

It gave no details about the circumstances of the night-time shooting. The Palestinian Health Ministry identified the man as a 26-year-old from Bethlehem and said another Palestinian had also been shot and critically wounded.

Hours later, the Israeli military issued a statement saying that a soldier stationed at a post near Bethlehem had “identified rocks being thrown at Israeli vehicles (and) in response, he fired his weapon.”

The statement did not identify the soldier's intended target and some Israeli media reports said warning shots were fired in the air, suggesting the two Palestinians may have been hit unintentionally.

“A report was received regarding injured Palestinians,” the military said. “Details regarding the incident are being reviewed and the incident will be examined.”

In a separate incident on Tuesday, two other Palestinians were killed by Israeli forces during clashes near the West Bank city of Nablus.

Israel captured the West Bank in the 1967 Middle East war. Palestinians seek to establish a state there and in the Gaza Strip, with East Jerusalem as its capital. Israeli-Palestinian peace talks collapsed in 2014.