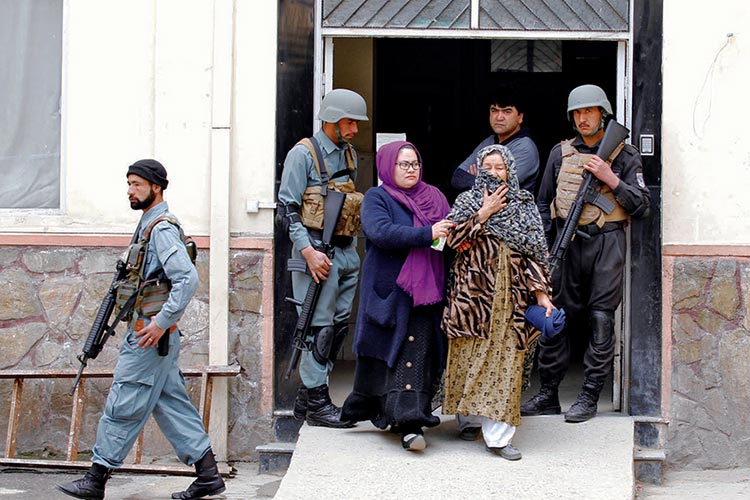 Women react as they walk past soldiers outside a hospital after multiple explosions in Kabul on Thursday. Reuters

KABUL: Several explosions in the Afghan capital of Kabul on Thursday killed six people and wounded 23 in an attack during celebrations to mark the Persian new year, government spokesmen said.

The attacks came on Nowruz, an ancient Persian festival to mark the start of spring that is widely celebrated in Afghanistan.

There were conflicting reports about of the cause of the blasts near the Kart-e Sakhi shrine, in a heavily Shi’ite area in the west of Kabul.

An interior ministry spokesman said mortar bombs had been fired.

The defence ministry said in a post on twitter that three rockets were fired at civilian homes and Nowruz gatherings.

The Daesh group claimed responsibility for the attack, the SITE monitoring group said.

Police said it was caused by three remote-controlled mines − one placed in the washroom of a mosque, one behind a hospital, and one in an electricity meter.

“As we celebrate this auspicious day to bind us together our fellow citizens witnessed another devastating day in #Kabul,” President Ashraf Ghani wrote on Twitter.

“We lost peaceful citizens to a coward enemy that knows no bounds.”

Kabul police spokesman Basir Mujahid said a fourth mine was defused near Kabul University, and that authorities were searching for any others that may have been placed in the area.

But he added that the mines were far from the main site of the celebrations.

Broken windows and collapsed walls were visible on homes and shops near the blast site. Blood stained the side of the road.

“It was terrible,” said Sayed Samim Sadit, a shopkeeper, who said he and his family were unhurt.

“We were all sitting in our home and all the glass blew in on us.”

Elderly resident Haji Rajab Ali said he saw two explosions in front of him and later awoke to find himself in hospital.

The attack happened two weeks after a mortar attack on a Shi’ite gathering in Kabul that killed 11 people.

Daesh claimed responsibility for that attack.

Violence has been relentless in Afghanistan even though Taliban militants are in talks with US officials.

The latest round of talks wrapped up this month, with both sides citing progress, but no agreement to end the 17-year war.

The Taliban are fighting to expel foreign forces and to oust the Western-backed government of Ghani.

Khalilzad will brief them on his recent talks in Doha, Qatar, with the Taliban, where the United States reported progress but no final deal on a withdrawal of U.S.-led international forces.

A day earlier Afghanistan delayed its presidential election until September 28, officials announced Wednesday, the second time the ballot has been put back and five months later than it was originally scheduled to be held.