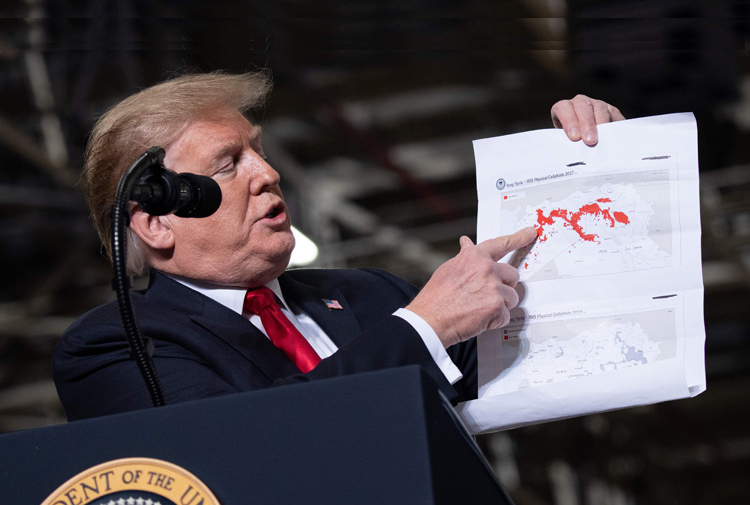 WASHINGTON: US President Donald Trump said on Wednesday that the Daesh's last bastion in Syria will be "gone" by the end of the day.

He showed off maps that illustrate the dramatic shrinking of territory held by the militant group in the period from his election in 2016 and now.

In one map shown by Trump to reporters in Washington and then again at a rally to factory workers in Lima, Ohio, Daesh territory marked in red extends over large areas. A second map, he said, shows the militant organisation about to be wiped out.

"There is no red. In fact, there's actually a tiny spot which will be gone by tonight," he said.

Fighting continued in Baghouz, Syria, on Wednesday, but the Daesh militants are down to a tiny scrap of land, where they are surrounded and under heavy fire from a US-led coalition of Kurds, Syrians and others. 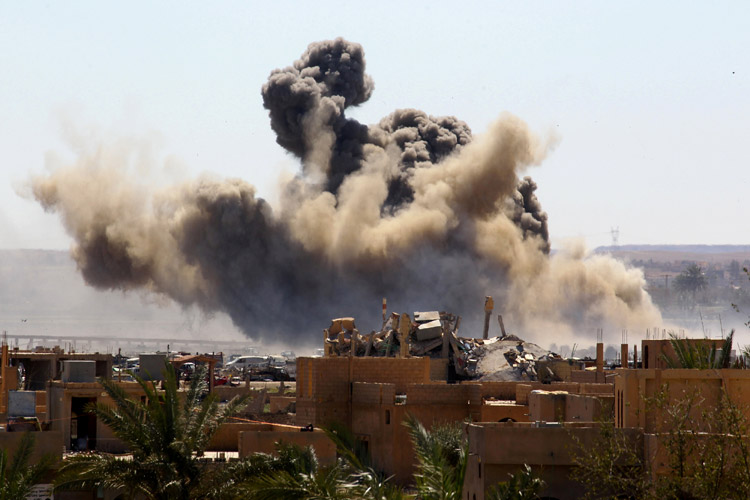 A bullish US President Donald Trump predicted on Wednesday that the Daesh group would be wiped off the map within hours, as he unfurled printouts showing the militants' shrinking presence in Iraq and Syria.

Trump claimed American forces have inflicted significant casualties on the battlefield in the past month.

He has signaled the group's imminent demise on several previous occasions, although Daesh, also known as ISIS, has yet to wave the white flag of surrender.

"There is no red. In fact, there's actually a tiny spot which will be gone by tonight," he said at the White House.

Later in Ohio, standing by M1A2 Abrams tanks painted in camouflage in front of a huge American flag, Trump again used his map props to highlight the military gains against the extremists.

"There is no red. In fact, there's actually a tiny spot which will be gone by tonight

"When I took over it was a mess, they were all over the place, all over Syria and Iraq," he said of Daesh, pointing at the red territory.

"And now you look at it, and there's no red," he crowed as workers cheered.

"As of today, this is ISIS, there's none. The caliphate is gone as of tonight."

After sweeping across swathes of Syria and Iraq in 2014, the Daesh militants' cross-border caliphate has been whittled down by multiple offensives to the tiny embattled enclave in Baghouz, Syria.

Fighting continued in Baghouz on Wednesday, with the Daesh militants surrounded and under heavy fire from a US-led coalition of Kurds, Syrians and others.

Trump claimed US forces in the last month "have killed the terrorists responsible for the attack in Syria that killed four Americans."

Fighters with the Syrian Democratic Forces gather near the village of Baghouz on Wednesday. Giuseppe Cacace / AFP

Fighters with the Syrian Democratic Forces patrol near the village of Baghouz on Wednesday. Giuseppe Cacace / AFP

A fighter with the Syrian Democratic Forces sits atop a military vehicle near the village of Baghouz on Wednesday. Giuseppe Cacace / AFP

A fighter with the Kurdish-led Syrian Democratic Forces stands in front of a campfire during Nowruz (Noruz) celebrations near the village of Baghouz on Wednesday. Giuseppe Cacace / AFP

On Tuesday a US-backed force in Syria said it arrested the militants suspected of involvement in that January attack, the deadliest on US troops since they deployed in the war-torn country in 2014.

Trump also said US forces have killed those who attacked the Bataclan theatre in Paris in 2015, and who orchestrated the 2000 bombing of the USS Cole which left 17 American servicemen dead.

The chief suspect in the USS Cole attack, Abd Al Rahim Al Nashiri, is being held in the US detention camp in Guantanamo Bay, Cuba.