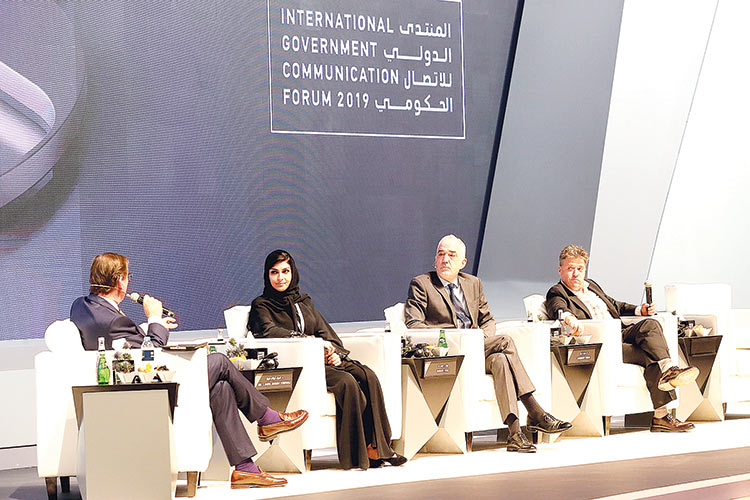 People need to be motivated to behave in a certain way, the panel said. Kamal Kassim/Gulf Today

SHARJAH: It is extremely important for governments to recognise honest communications as a critical function in introducing new policies, campaigns and sharing strategic information. All these must be in tandem with effective communications strategies, said Dr Lamya Fawwaz, Masdar’s Executive Director of Brand and Strategic Initiatives.

She said, “To create these strategies and messages, we must understand how people absorb and understand information. Through digital platforms and technological advancements we can now more effectively gather and analyse data, applying these with behavioural science to create more effective communication strategies that ensure that our messages are reaching people and influencing them.”

She made the observation during a panel discussion at the International Government Communication Forum. The session, titled Human Behaviour: New Dimensions for Change Communication, also featured Roger Fisk – head of the political campaign, marketing, and media strategies for President Barack Obama; and Andrew Keen – eminent author and keynote speaker who specialises in the impact of new technology on 21st-century business, education, culture and society.

Emphasising the importance of behavioural science in communications, Dr Fawwaz said that people need to be motivated to behave in a certain way. Since people are more informed now than they’ve ever been, emotive messaging is more effective in encouraging people to change their behaviour.

She said, “People are also very influenced by role models. The UAE is unique as we look up to our leadership and trust them. That is due to the open and consistent communication, by our leaders. When people see those they look up to communicating openly, they are more likely to get behind their message and carry it forward.”

Dr Fawwaz argued that while technology is fast changing, it is important to acknowledge that government communication is a long-term strategy.

She added, “The UAE can be seen as an example for the region. We see that the UAE has been the most effective model here in terms of government-citizen communication. The government is confident in the direction it’s moving and it’s communicating that honestly with its people.

“Covering the transformation of government campaigns over the decades, Roger Fisk stressed that the proliferation of technology and applications has transformed and continues to transform the government communication landscape.

“The most important thing for governments to ensure is that their communication campaigns benefit societies and help their institutions function better,” he said.

“In the past, we did not have the technological tools to help us gather data during a campaign. Today we do, and these tools provide answers on what makes people form a decision. This helps campaigns to micro-target particular segments of society and understand how people make a decision,” added Fisk, who is credited with the success of President Obama’s electoral and media campaigns. Fisk asserted that it is critical that governments and businesses should not focus only on social media and applications as communications tools as many people still get their news from TV, radio and the newspaper, and from the people in their lives.

“There is still a role for traditional media and how we are influenced by the people in our lives. The most critical thing though is that communication is honest and based on real actions. If your communication is based on a foundation of trust and authenticity, then you can take your clients, readers, and citizens on a journey that spans twenty to thirty years,” he said.

Other important issues like how will governments use data in the future, and artificial intelligence (AI) and the role of humans in both communication and other areas were also discussed during the session. He said, “The great challenge and opportunity of the 21st century is realising human potential again."

Veteran journalist Andrew Wilson, who moderated the session, highlighted the key role that all governments should ideally play in effective communication to positively influence behaviour for the betterment of society.