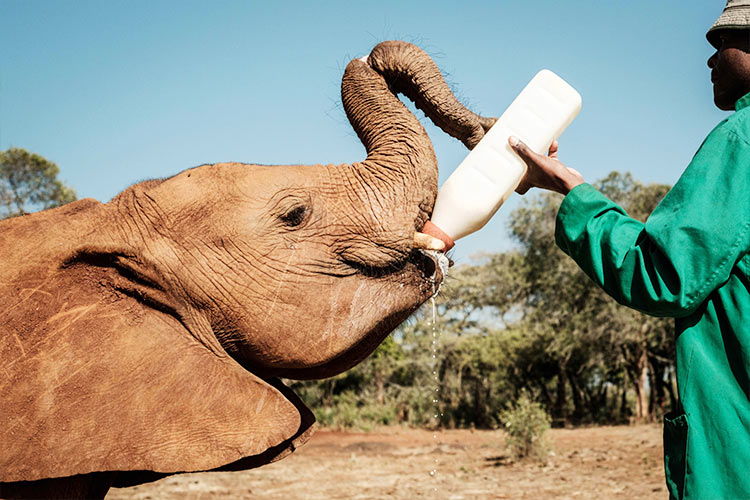 An orphan elephant with its trunk injured by a poachers' snare is fed with milk by a keeper.

NAIROBI:Luggard, a lively three-year-old, limps behind the rest of his ragtag troupe of orphan elephants, halting to graze or rub against a tree.

When he was just five months old, Luggard was found struggling to keep up with his herd in Kenya's Tsavo East National Park.
He had been shot twice.

One bullet pierced his left front foot, and another shattered his right, hind femur just above the knee joint.

With the rest of the gang of 20 elephant babies in this unusual orphanage, Luggard comes charging with great enthusiasm, though hobbling heavily on his deformed leg, out of the bush for a 9:00 am feeding.

The calves greedily slurp from oversized "baby bottles", rumbling contentedly and trumpeting excitedly as they ingest the special mix of human baby formula, water and vitamins.

Each calf at the nursery has a tragic story: orphaned by poachers, drought, or in conflict with humans encroaching ever further into the few wild places left.
"We rescue them from just a few days old," DSWT administrator Kirsty Smith told AFP.

The youngest elephant in the centre's care is Larro, 10 months.

She was found lost and alone in the Maasai Mara game reserve, likely after her family clashed with humans.

"Sometimes the elephants get into the communities, farms and homes, people fight them, chase them away, and in the process of the fight they (the babies) get separated from their families.

Without its mother, an elephant calf will die.

They are weaned between the ages of five and 10, when they enter adolescence. Adulthood starts around the age of 18, and left undisturbed, elephants can live to be 70.

But poaching claims many prematurely.

About 20,000 African elephants per year -- 55 per day -- are killed, mainly for their tusks, according to the WWF.
"You're killing a whole elephant just to have the tusks! For what -- just to have an ornament?" asks an exasperated Lusichi.
He points to Enkesha, a tiny two-year-old.

"You see the trunk? She was found trapped in a snare" which all but severed the appendage elephants use to breathe, eat, drink water, and communicate.
Enkesha was rescued, stitched up, and after a long rehabilitation, now uses her badly-scarred trunk almost as normal, ripping up grass to eat and sucking up water. 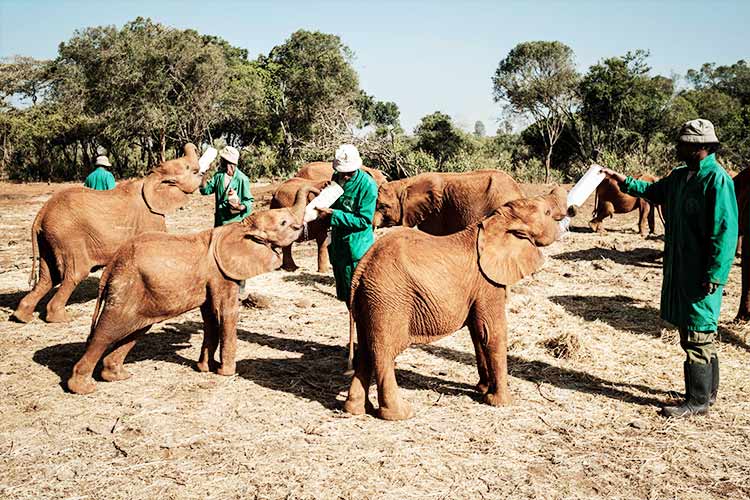 Each calf at the nursery has a tragic story.

The nursery keeps babies like Luggard, Larro and Enkesha until they are about three -- the age at which elephants start craving more independence.
But until then, they receive 24-7 care with a bottle feeding every three hours.

The babies sleep in single wooden rooms at night, and the youngest each have a keeper with them.

"It's similar to spending a night in a bedroom with... a human baby," said Julius Shivegha, 43, one of the caretakers.


"We have to make sure that they are well-covered with a blanket, to keep them warm... They keep waking up for the milk... We are around for reassurance and for company, just to make sure they don't feel lonely.

The bond between animal and human is a close one.

During the daytime, the keepers accompany the group as they wander about the savannah, browsing and playing.
They call their charges by name, and the elephants respond.

As a treat, the keepers prepare mud baths into which the babies dive with abandon, rolling and sliding about, blowing bubbles, and wildly splashing the wet earth around with their trunks. 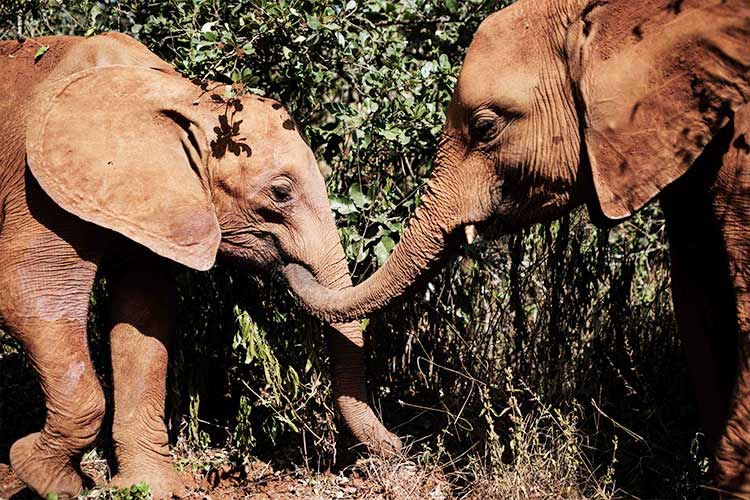 In 42 years, the trust has rehabilitated more than 230 orphan elephants.

"We sometimes play soccer with them," said Shivegha of the daily routine.
"Sometimes we just cuddle them, we hug them. Some of them will keep on trying to just grab your hands or suck your fingers like a pacifier. All of this makes them really close to us... We are their mothers."

This makes for a "bitter-sweet" separation: when the elephants graduate from the nursery, they go to one of three reintegration centres at Tsavo.
Here they spend several years learning to live independently, eventually joining a herd or forming their own and setting off into the wider park.

For disabled elephants like Luggard, the SWT runs a haven in Kibwezi Forest with abundant food and water all year round, and no human settlements nearby.
In 42 years, the trust has rehabilitated more than 230 orphan elephants. Over 120 are living wild and have given birth to 30 known calves, said Smith.
Ending attacks on elephants will be difficult in a part of the world where poverty and the danger posed to human life and property by wild elephant herds, are seen as justification.

To try and change mindsets, the SWT takes children on excursions to cultivate a love for wildlife and provides schools with books and desks with money raised through its projects.