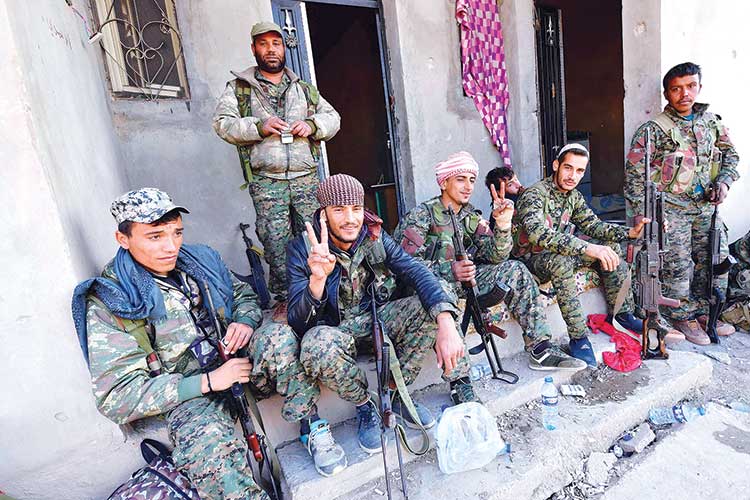 Fighters from SDF gesture the “V” for victory sign as they come back from the frontline in the Daesh group’s last remaining position in the village of Baghouz in Syria. Agence France-Presse

DEIR AL-ZOR PROVINCE: Warplanes flew near Baghouz in eastern Syria early on Wednesday, a Reuters witness said, as the final remnants of the Daesh group held a narrow strip of land along the Euphrates in a last-ditch defence of its dwindling territory.

Defeat there would signal the end of the ultra-hardline movement’s control in eastern Syria, having held more than a third of Syria and Iraq at one point in 2014 as it sought to carve out a huge caliphate in the region.

On Tuesday, the US-backed Syrian Democratic Forces (SDF) said they had driven the remaining Daesh fighters in the town of Baghouz from a makeshift encampment that had represented most of its remaining territory.

But while the capture of Baghouz, close to the Iraqi border, would mark a significant milestone in Syria’s eight-year war and in the battle against the extremist group, Islamic State remains a threat.

Some of the group’s fighters are still holed up in the central Syrian desert and others have gone underground in Iraqi cities to wage an insurgent campaign to destabilise the government.

Mustafa Bali, a spokesman for the SDF, said late on Tuesday that clashes with the militants at the Euphrates were continuing “in several pockets”.

Their battle against the last jihadists holding out in the besieged Syrian village of Baghouz hasn’t quite ended but Kurdish-led fighters have already started celebrating.

When they returned from the front on Tuesday, they put the lamb skewers on the grill and broke into dance as the radio of their battered truck sputtered a Kurdish tune.

The Syrian Democratic Forces (SDF) delivered the killer blow to the last vestige of the Daesh group’s “caliphate” this week and the end of the bruising six-month-old operation is now within touching distance.

With backing from the US-led coalition’s warplanes, they forced holdout jihadists from their main encampment and into a few hectares (couple of acres) of farmland by the Euphrates River.

The prospect of an imminent victory announcement combined with early leave for the Kurds’ Nowruz New Year holiday drew dozens of smiling fighters to a base on the edge of Baghouz.

The front porch of a plush villa the SDF turned into a temporary military headquarters is littered with the duffle bags, ammo belts and body armour the fighters discarded to join the impromptu party.

One fighter remained on the roof, on barbecue duty, while the others formed a circle to start a “dabke” folk dance.

“It’s a day of celebration, the nightmare is over,” said Majid Hejjo, a 23-year-old SDF fighter still wearing his fatigues and a khaki cap.

The young Kurdish soldier is originally from the northeastern province of Hasakeh but is stationed in Raqa, the former Daesh “capital” which the SDF seized in 2017.

Since December, he has been regularly mobilised on two-week fighting missions to help wipe out the very last remnants of a Daesh proto-state that once covered territory larger than Britain.

Now the young man wants to hang up his rocket-propelled grenade launcher and return to his pregnant wife.

“We’re doubly happy. We’re going to see our families and we have vanquished Daesh,” he said.

Next to him, his younger half-brother Mohannad is checking he hasn’t forgotten anything as he stuffs his belongings into his green wheeled suitcase, including the yellow tea mug he takes everywhere.

An unknown number of diehard Daesh are still refusing to surrender and dodging SDF fire in their hideouts along the reedy banks of the Euphrates.

Syrian and Iraqi government forces and their allies are deployed on the other side of the river and the border, making any escape impossible.

Although Daesh has already started regrouping in some of its desert and mountain hideouts in the region, the fall of Baghouz will mark the end of the group’s territorial control.

His backpack already thrown over his shoulder, Mohammed Hallush doesn’t plan to stay to witness the historic announcement and is heading back to his family in Hasakeh.

“I’ve been here 11 days, the battle is over, the war is over,” said the lanky 24-year-old with grey woolly hat and short trimmed beard.

“This leave will not be like the previous ones. This time we’re returning home from Baghouz.”