Animals to be saved from Gaza zoo - GulfToday 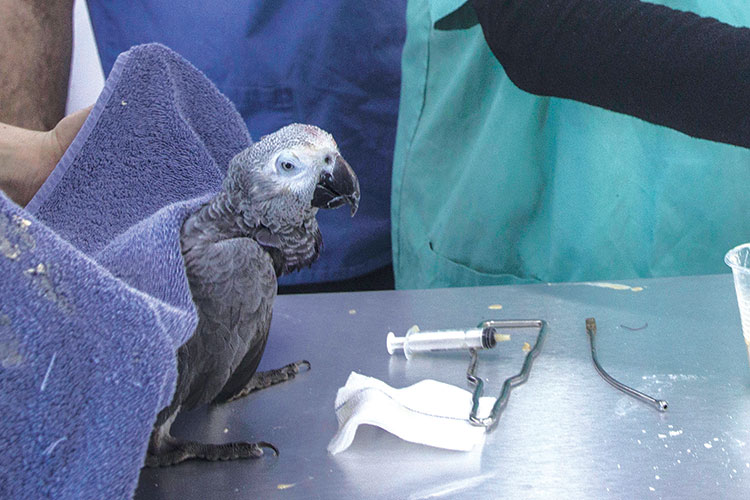 An African grey parrot is treated by veterinarians at the Erez crossing. Associated Press

GAZA CITY: Forty animals including five lions are to be rescued from squalid conditions in the Gaza Strip, an animal welfare group said on Wednesday.

The animals would be taken out of a zoo in the Palestinian enclave and relocated to sanctuaries in Jordan next week, the Four Paws organisation said.

Among the other animals to be taken out are a hyena, monkeys, wolves and porcupines, the organisation said in a statement.

Rafah Zoo in southern Gaza confirmed the agreement, saying they weren’t receiving any funds for the animals and couldn’t provide proper care for them in the strip.

The zoo hit the headlines last month when the cash-strapped owner revealed he had declawed one of the lions there, so that customers could pay to play with her.

The organisation condemned the declawing, with almost 150,000 people signing a petition against the treatment.

The animals would be treated and sedated, before being taken through Israel into Jordan, Four Paws said.

“For far too long, the animals of Rafah Zoo have had to live under unimaginably dreadful conditions,” said Four Paws veterinarian Amir Khalil.

“We are happy to finally put an end to this horror,” he said in the statement.

Israel has imposed a crippling blockade on the Gaza Strip for more than a decade, measures it says are necessary to isolate the enclave’s rulers Hamas. Israel and Hamas have fought three wars since 2008.

In 2016, Four Paws helped facilitate the transfer of the sole tiger in the Gaza Strip, eventually relocating it to South Africa.

The organisation in 2017 rescued a lion and a bear from a zoo in Mosul in northern Iraq, a former stronghold of the Islamic State group.

One year on from the start of Gaza’s border protests, the weekly clashes with Israeli soldiers have become part of the texture of life in the Palestinian enclave, providing inspiration and even raw materials for local artists.

Diorama artist Majdi Abu Taqeya spends hours creating three-dimensional miniature replicas of the protest scenes, with figures carved from remnants of Israeli ammunition collected from the landscape along the frontier.