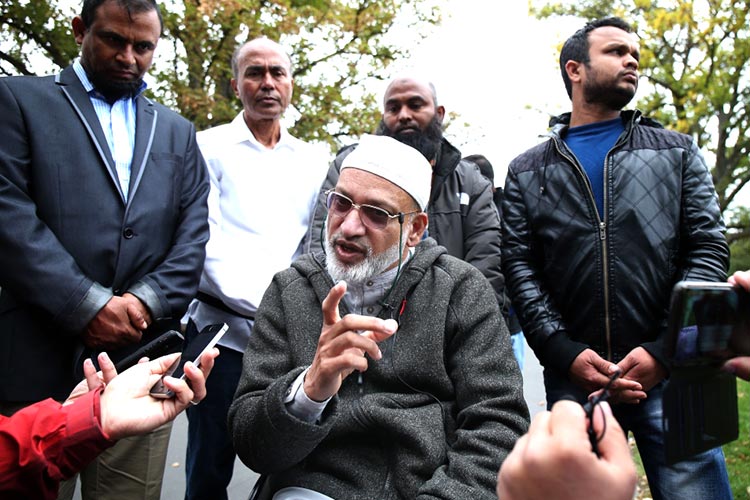 Farid Ahmed speaks to the media in Christchurch on Sunday, two days after a shooting incident at two mosques in the city. David Moir / AFP

CHRISTCHURCH: A man whose wife killed in the Christchurch attack as she rushed bank in to a mosque to rescue him said he harbours no hatred toward the gunman, insisting forgiveness is the best path forward.

"I would say to him 'I love him as a person'," Farid Ahmad told AFP. "I could not accept what he did. What he did was a wrong thing."

Asked if he forgave the 28-year-old white supremacist suspect, he said: "Of course. The best thing is forgiveness, generosity, loving and caring, positivity."

Husna Ahmed, 44, was among 50 people, and at least four women killed in the attack on two mosques where worshippers had gone for Friday prayers.

When the shooting started, she helped several people escape from the women's and children's hall.

"She was screaming 'come this way, hurry up', and she took many children and ladies towards a safe garden," Ahmad said.

"Then she was coming back for checking about me, because I was in a wheelchair, and as she was approaching the gate she was shot. She was busy saving lives, forgetting about herself."

Ahmad, 59, who has been confined to a wheelchair since being hit by a drunk driver in 1998, believes he escaped the hail of bullets because the gunman was focused on other targets.

"This guy was shooting one person two, three times, probably that gave some time to us to move out... even the dead he was shooting them again."

Ahmad, who sells homeopathy products, did not see his wife when he left the mosque and only learned of her death after someone photographed her body.

"Her picture was out in the social media, so somebody showed me the picture and I identified quite easily."

Australian suspect Brenton Tarrant has yet to enter a plea in the single murder charge so far brought against him.

A self-professed white supremacist he flashed a white power symbol when he arrived in court on Sunday. His meandering "manifesto" is filled with racist vitriol, detailing two years of planning for the massacre.

In the 74-page screed, he says he first began considering an attack in April and May of 2017 while travelling in France and elsewhere in Western Europe.

Ahmad on Sunday faced the difficult task of formally identifying his wife's body and claim her effects.

If he were able to sit down with the suspected mass murderer, he said he would encourage him to rethink his outlook on life.

"I will tell him that inside him he has great potential to be a generous person, to be a kind person, to be a person who would save people, save humanity rather than destroy them," he said.

"I want him to look for that positive attitude in him, and I hope and I pray for him he would be a great civilian one day. I don't have any grudge."